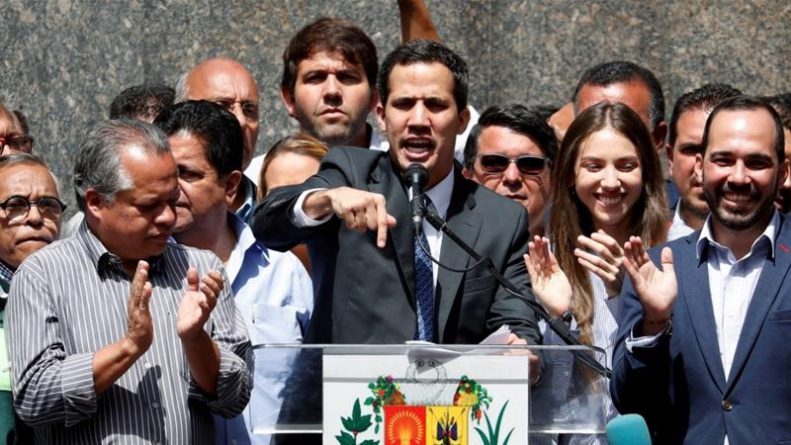 Opposition leader Juan Guaido’s support base is not the Venezuelan people but foreign right-wing governments.

No other day is more emblematic for Venezuelans than January 23. It was on this day that Venezuelans rose up and overthrew the dictator Marcos Perez Jimenez in 1958. Thus, it was no surprise when the Venezuelan opposition chose January 23 to launch their most recent offensive, with the relatively unknown opposition benchwarmer Juan Guaido declaring himself president. The opposition’s desired message was clear: Nicolas Maduro is a dictator and “the people” have had enough. But metaphors only stretch so far. Maduro is no dictator, and the opposition – much less Guaido himself – do not speak for “the people”.

In fact, until last week, fewer than 20 percent of Venezuelans even knew who Guaido was, and he only came to head the opposition-controlled National Assembly by accident. To quell chronic infighting, Venezuela’s fragmented opposition agreed to rotate leadership, and despite claiming only 14 seats of 167, it was the turn of his party, Popular Will.

For his part, Maduro was just inaugurated for his second term, after winning an election that the main opposition coalition chose to boycott. Today they cry fraud, but this is an opposition that has been boycotting elections, orchestrating coups, and unleashing bloody violence in the streets of Venezuela for nearly two decades.

We should be clear: Guaido’s self-declaration is yet another attempted coup. It doesn’t take a legal scholar to know that it has no constitutional basis. The opposition appeals to Article 233 of the constitution to claim that Maduro has “abandoned” the presidency, but he clearly hasn’t.

What sets this attempt at regime change apart from previous ones is the immediate reaction from many in the international community. The United States offered its pre-emptive support in the form of a video endorsement from US Vice President Mike Pence, and a handful of Latin American countries quickly followed suit, with several European nations threatening to do the same if new elections are not immediately called.

How can world leaders support a coup in the name of democracy? The ease with which parts of the international community have recognised Guaido reflects not principled support for democracy, but a global reconfiguration of power. This includes not only the rise of a multi-polar world – exemplified by Russian and Chinese support for Venezuelan sovereignty – but also a rightward swing across Latin America alongside the warring colonial conceits of the US and Europe.

US President Donald Trump’s support for regime change is unsurprising – his thin commitment to isolationism notwithstanding. But his decision to name Elliott Abrams, whose bloody fingerprints are all over Nicaragua’s Contras and other Central American war criminals, as special envoy to Venezuela was even more extreme than many expected.

With friends like these, who needs elections at all? On Venezuela, Democratic Party leaders are often hard to distinguish from their Republican counterparts, and today is no exception. Eyes trained on Florida’s 2020 electoral college votes, most, like Nancy Pelosi, have staked out openly pro-coup positions. And after two years stoking anti-Russia panic, MSNBC’s standard script offers little guidance to confused liberals seeking to triangulate a political position – Trump is for the coup but Russia is against it – what to do?

Small signs of hope have emerged from the new Democratic cohort, however. California representative Ro Khanna rejected US support for Guaido and called for an end to sanctions, while Minnesota representative Ilhan Omar tweeted that; “A US-backed coup in Venezuela is not a solution to the dire issues they face. Trump’s efforts to install a far right opposition will only incite violence and further destabilize the region.” Meanwhile, progressive firebrand Alexandra Ocasio-Cortez has disappointingly settled for retweeting Khanna, while Bernie Sanders buried the lede in a hand-wringing thread that spent more time denouncing Maduro than opposing US intervention.

Europe, characteristically, is positioning itself as the global lesser-evil, imperialism with a smile. While not endorsing the coup outright, several countries have threatenedto do so if Maduro doesn’t call elections within eight days. Blackmailing a recently-elected president into new elections is arrogant enough – but it’s positively galling once we consider who is issuing the ultimatum. The UK’s conservative Prime Minister Theresa May, for example, is presiding over an unpopular government that can scarcely survive a no-confidence vote – and who can forget her party’s former leader Margaret Thatcher’s overt support for Chilean dictator Augusto Pinochet?

Meanwhile, Spanish Prime Minister Pedro Sanchez only came to power through another vote of no confidence in a country that has still scarcely grappled with its own fascist legacy, the heirs of which – the right-wing Popular Party – played a key role in the 2002 coup against Chavez.

France’s besieged President Emmanuel Macron, whose approval ratings are lower than Maduro’s, would be well-advised to get his own house in order. Macron embraces protests as long as they don’t occur on French soil, and seems to have forgotten the thousands arrested and injured and the eight deaths caused by repression of the Yellow Vest protests.

And then there’s Latin America, where the new wave of right-wing governments quickly embraced Guaido, not because they support democracy, but because overthrowing Chavismo would be the crowning achievement of their efforts to gradually reclaim power in the region.

In fact, the so-called “Lima Group” that helped fast-track regional recognition for Guaido was established scarcely 18 months ago as a spearhead of Latin America’s right-wing, and with the explicit objective of antagonising Venezuela. Through soft coups in Paraguay and Brazil, along with elections in Argentina, Chile, Colombia and elsewhere, the leftist Pink Tide has been pulled apart and delivered into the hands of international capital.

Here too, the roll-call is revealing. Colombian President Ivan Duque Marquez is the handpicked successor of Alvaro Uribe, the godfather of the Latin American far right, accused of having ties to drug trafficking and death squads (many of those today emigrating from the Venezuelan crisis had previously fled decades of political violence in Colombia).

Peruvian President Martin Vizcarra wasn’t even elected himself, and instead came to power when his predecessor was forced to resign amid corruption scandals (but not before pardoning Peru’s former president and war criminal Alberto Fujimori, although the pardon was later reversed by the Supreme Court).

Standing at the head of these self-appointed guardians of Venezuelan “democracy” is Jair Bolsonaro – a racist misogynist who openly praises the Brazilian military dictatorship (1964-1985). The hypocrisy is so thick you can cut it with a knife. And in some ways, the clearest proof of the Lima Group’s political motivations is the defection by Mexico, where Andres Manuel Lopez Obrador was inaugurated in December. Bucking the rightward shift in the region, Lopez Obrador has also rejected this newly hegemonic Washington Consensus, instead, offering to mediate a solution to the Venezuelan crisis.

It’s not clear what the coming days will bring. Guaido has so far refrained from calling for a new election. His strategy has rather been to build a parallel government not with popular votes but with international support. The Bank of England is currently under pressure to refuse the Maduro government’s long-standing request to repatriate Venezuelan gold.

Meanwhile, if there were any question about the role of oil in this equation, Marco Rubio has tweeted about how US oil jobs demand that the coup succeed, and Guaido is threatening to name a parallel board to Venezuelan-owned (but US-based) oil company Citgo.

In response to US support for the coup, Maduro rightly cut off diplomatic relations, but Trump initially refused to withdraw the staff from the embassy. While the Venezuelan government would have been entirely justified in arresting and expelling the ambassador, Maduro didn’t take the bait, and instead defused a dangerous situation that could have been used to justify more direct intervention.

The Venezuelan is proposing political dialogue to ease tensions, which is a necessary step. While no dialogue will be able to stabilise the economic tailspin, pressuring the US to lift its brutal sanction regime would be a major step in the right direction.

Lost amid all this global brinksmanship, however, are the very people that everyone claims to be speaking for: the Venezuelan poor, those bearing the brunt of a profound economic crisis, opposition sabotage, and US sanctions alike. These very same sectors rebelled against the crisis and neoliberal reform in 1989, propelling Hugo Chavez into power a decade later, and many are understandably unwilling to throw away the political gains of the past 20 years. And it is with these sectors, not with right-wing, imperialist coups, that Venezuela’s future lay.