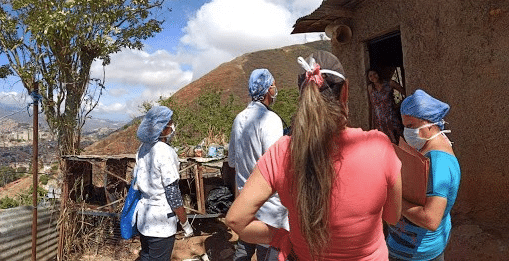 In contrast to the chaotic response of neoliberal countries to the Covid-19 pandemic, socialist Venezuela has effectively managed the epidemiological crisis, utilizing scientific and people-centered measures to reduce the rate of infection. Such an impressive handling of the pandemic was made possible due to the participatory and socially sensitive nature of the Bolivarian government which consists in the decentralization of institutional power to communes, communal councils and a variety of people’s movements. All this has occurred despite USA’s imperialist hybrid warfare and sanctions which have crippled Venezuela’s oil industry, thus severely undermining a process of change wherein oil-generated surplus was being dedicated to genuine social transformation.

Venezuela’s Covid-19 response can be traced back to the Bolivarian Revolution – initiated in 1999 – which laid the foundations for socialized medicine. Before Hugo Chavez took office in 1999, the health system in Venezuela was largely dysfunctional and inaccessible for the working class. During the 1990s, presidents Carlos Andres Perez and Rafael Caldera instituted neoliberal changes in the health sector, paving the way for greater privatization of medical services and institutions. By 1997, 73% of total health expenditure in Venezuela was private.

People who needed biomedical care but could not afford private clinics sought treatment from hospitals. Patients commonly lined up outside hospitals at dawn and often waited until after nightfall to see a professional or else were sent to another hospital because medical workers were overburdened. This system was critiqued as la ruleta or “the roulette wheel” because patients were like the roulette ball, being bounced around from one overcrowded hospital to another before being admitted for care.

From 1970 to 1996, government funding for health decreased from 13.3% of the federal budget to 7.89%. A report from the Pan American Health Organization (PAHO) concluded: “Throughout the 1990s, the capability of the public health network to provide health services and resolve health problems became critically insufficient.” All through this period, the old network of elite university medical schools in Venezuela had been producing qualified doctors, graduating about 1,200 to 1,500 per year. After graduation, more than 50% of them went directly into private practice and another 10% left the country in hope of working in lucrative markets, like Spain. Only some 4,000 physicians, about 10% of all doctors in the country, were practicing in primary care or family medicine and of these merely 1,500 were working in tumbledown, tottering public clinics.

RELATED CONTENT: How Venezuela has Held Back COVID-19 in Spite of the US Sanctions Stranglehold on its Economy

Radicalized by the reality of inequality and suffering, Chavez attempted to create a health system capable of satisfying the needs of the people. In 1999 and 2001, he appointed two past presidents of Latin American Social Medicine (LASM) as the health ministers. From the start, they tried to implement a healthcare system based on the principles of LASM. However, they faced stiff opposition from the Venezuelan Medical Federation that had aligned itself with the traditional political parties that had lost power in the 1990s and with the private medical sector that was strongly opposed to Chavez’s attempts to re-constitute the healthcare system. The president’s efforts were based on his socialist ideology which transformed the understanding of health from that of a commodity to be exchanged in the market to a fundamental right to be provided by the state.

On 30 October, 2000, Chavez signed the Cuba-Venezuela Comprehensive Cooperation Agreement with Fidel Castro, constructing the basic framework of socialized medicine. This agreement allowed for the exchange of goods, services, and expertise between the two countries, with Venezuela’s primary contribution being petroleum. In return, Cuba would provide human capital: thousands of health workers, agronomists, technicians, and other experts, who would facilitate the revolutionary vitalization of Venezuelan society.

With the help of Cuban medical expertise, Chavez developed Misión Barrio Adentro (Inside the Neighborhood programme) – a nationwide health system that first began delivering primary care in 2003. Like other missions, Barrio Adentro was also created as a parallel structure either completely outside the scope of government ministries or in collaboration with them, as a means to increase community participation to meet the new socialist imperatives of the Bolivarian Revolution more efficiently. Popular protagonism has occupied a central place in the Bolivarian Revolution and Article 62 of the new constitution framed under Chavez’s administration relates specifically to participatory democracy. It states that “the participation of people in the formation, control and execution of public matters is the means necessary to accomplish the protagonism that will guarantee their complete development, both as individuals and collectively”.

Located in barrios – large districts made up of smaller neighborhoods of poor and working-class people – the new clinics built as a part of Barrio Adentro promoted a form of community-rooted public healthcare receptive to the poor. They met the needs of 80% of the national population who had been marginalized and excluded by the old medical institutions and more than 75% were satisfied with the service according to the National Statistics Institute (INE). In Caracas, barrios were the poorest urban spaces, the most socially marginalized, and the most deprived of services. These barrios were built into steep hillsides and were subject to unexpected mudslides in heavy rains. Chavez’s health programmes were aimed at improving the lives of these people.

From 2004 to 2010, Barrio Adentro deployed between 10,000 and 14,000 Cuban doctors and 15,000 to 20,000 other Cuban medical personnel—dentists, nurses, physical therapists, optometrists, and technicians. Their services were made available to all Venezuelans for free at nearly 7,000 walk-in offices and over 500 diagnostic clinics. Avoiding the creation of dependency on Cuban health professionals, the agreement between Chávez and Castro also included a training component which enabled 10,000 Venezuelans from poor background to receive free medical and nursing education in Cuba; and the Cuban government also facilitated the construction of medical and nursing schools in Venezuela to train thousands of primary healthcare practitioners from humble roots.

Barrio Adentro expanded at an astounding rate, growing from a trial program in Caracas in the spring of 2003 to a nationwide network of 13,000 physicians working in all twenty-four states of Venezuela by the fall of 2004. It was reported that there were 8,500 primary care popular consultation offices in operation. As the doctors and other health workers began work, the first neighborhood health committees were formed in barrios and villages. Each neighborhood of 1,500 to 2,000 people that wanted a Cuban doctor to serve them was expected to organize a committee of ten to twenty volunteers from the community who would commit themselves to finding office spaces, providing sleeping quarters, collecting furniture and feeding the medical providers. The health committees were also there to support the doctors in other ways, such as accompanying them on house-to-house visits, helping them compile data on various health issues and participating in public health campaigns to educate their neighbors about preventive care and healthy living.

Barrio Adentro aimed to improve the health of poor Venezuelans not only by providing free health services but also through the strengthening of community capacity and social organization via participatory democracy. This was achieved primarily through the formation of health committees. These committees served as organizational mechanisms through which barrio residents exercised their participation in primary health care delivery and management.

Health committees are generally made up of 10 people chosen from among the citizens. These committees are expected to assess health problems in the community and decide on the main actions that the community should take to address them. Supported in each locality by teams consisting of a physician, a social worker, and a nurse, the health committees prepare proposals for health interventions to be considered for funding by the state government.

Venezuela’s subsidized food regime significantly reduced the amount of food imports, dropping from 90% in 1980 to 30% in 2013. Since the launch of Misión Agro-Venezuela in 2011, the country’s production of staple crops and the amount of land under production both increased and 3 million hectares of farming land have been redistributed. As a result, 5 million Venezuelans received free food, including 4 million children in schools, and 6,000 food kitchens fed 900,000 people. The success of these anti-hunger measures was acknowledged by the World Health Organization in its recognition that Venezuela has been the most successful country in Latin America and the Caribbean in eradicating hunger.

The Struggle for Life

With the failure of capitalist countries in battling the Covid-19 pandemic, the effectiveness of socialist management is increasingly becoming clear from Venezuela’s Coronavirus response. This response is deeply rooted in the process of socialist re-construction initiated by Chavez where the historical failure to invest in barrio-based social services combined with the disinvestment that accompanied neoliberal reforms in the 1980s and 1990s was radically reversed, leading to a transformation of the physical landscape of poor neighborhoods. To put an end to this revolutionary change, USA has imposed inhumane sanctions, starving and killing Venezuelans. Despite these imperialist tactics, the revolutionary spirit of the working people continues to surge, carrying forward the struggle for life.

Featured image: Venezuelan and cuban medical personnel going house to house doing screenings in the most hard to reach places during the first week of the pandemic. File photo.