According to RT News, referencing data provided by Johns Hopkins University, the United States has reported 88,521 new cases and 971 deaths from COVID-19 in the last twenty-hour hours. With these figures, the North American nation continues to lead the list of countries most affected by the pandemic.

“We are starting to find ourselves on a steep slope of the epidemic curve, so I think cases will accelerate,” Dr. Scott Gottlieb, former chief of the Food and Drug Administration, told CNBC. In addition, the specialist warned that the US could reach 100,000 infections a day in the coming days.

Meanwhile the Caribbean nation of Venezuela reported 309 new cases and four deaths from the coronavirus for Friday October 30, according to Venezuelan media. Out of the 309 new cases, thirty-six were imported—thirty from Colombia and six from Peru, all of them entering through the state of Táchira. 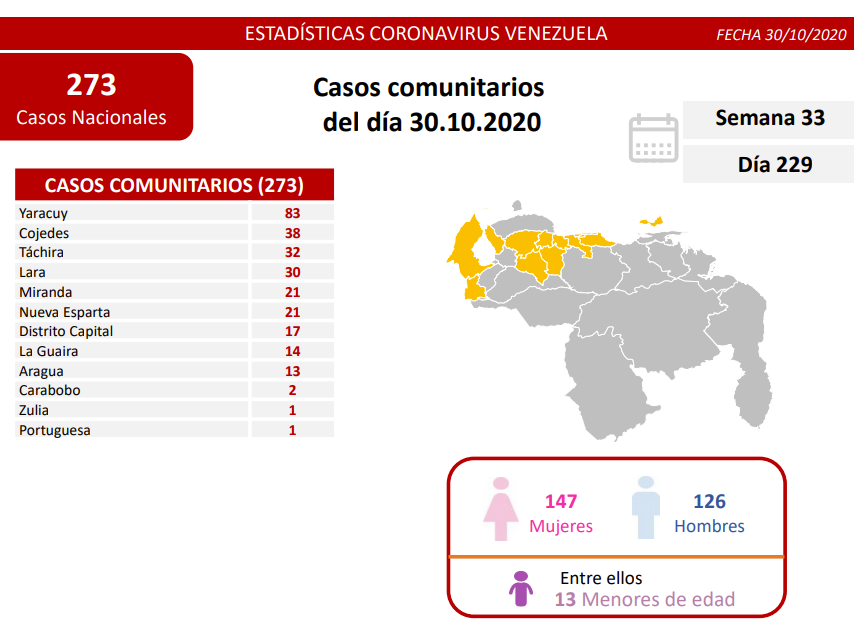 It is unfortunate that four Venezuelans died as a result of the disease: two men, aged fifty-one and seventy-seven years, from Lara; a sixty-two year-old woman from Barinas; and a fifty-four year-old man from Aragua. To date, Venezuela has registered 91,589 positive cases, out of which 86,335 people have recovered (94%), while 4,461 are active. 4,395 are being treated in the public health care system and sixty-six in private clinics.

When analyzing the figures from the two countries it’s clear that the US displays an absolute mishandling of the pandemic, when in one day that country reported 971 deaths, while in Venezuela the number of deaths has reached 793 since March. The total number of cases reported in Venezuela is 91,589 while the United Stare—only in one day—reported 88,521 cases, and experts estimate that soon they will sadly surpass 100,000 cases per day.

“Venezuela has an estimated 33 million inhabitants, while the US has 330 million. The United States has ten times more population than Venezuela, so if we scale the numbers from Venezuela to the US they would have only reported 3,090 cases and 40 deaths within twenty-hour hours, if applying with the same responsible approach to the pandemic as Venezuela. This approach includes massive screenings since the first case was detected, mandatory us of face-masks in public places (but no lockdowns), radical local and international travel restrictions, closure of public parks, beaches, restaurants, bars, cinemas, schools (public parks and beaches were reopened only last week) and the most important of all measures, free and universal health care,” a political analyst told Orinoco Tribune.

In addition, Venezuela has been heavily impacted by the COVID-19 catastrophes of Brazil, Colombia, Ecuador and Peru. Due to a strict biosecurity protocol at border check points, all Venezuelan migrants returning to the country had to pass a quarantine protocol provided for free by the government.

The reopening scheme used by Venezuela is known as 7+7, meaning during seven days some economic sectors are open under an special schedule (more sectors are added if numbers improve), and the next seven days are what is called “radical quarantine,” meaning people can only move within their neighborhoods, only the minimal economic sectors can work, and so on.

“During the COVID-19 pandemic Washington has redoubled their regime-change strategy, imposed more sanctions, launched a mercenary operation in Macuto Bay and Chuao, and sabotaged the oil industry and gasoline production, to the point of seizing Venezuelan gasoline while millions in Venezuela are desperate to have access to gasoline. In addition Washington’s terrorists and spies may have been implicated in this week’s attack on the Amuay refinery. In the face of all this aggression Chavismo and Maduro’s administration, with some help from Cuba, Iran, China, Russia, and Turkey, have fought an incredible and admirable battle against COVID-19,” added the analyst.