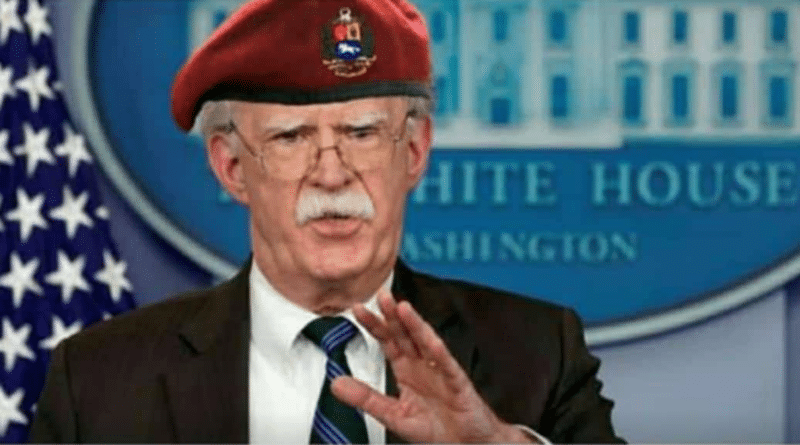 This Sunday, June 21st, the vice minister for International Communication in the Venezuelan Ministry of Foreign Affairs, William Castillo, described former US national Security advisor, John Bolton’s book chapter about Venezuela as a “model of disinformation” in which the US former official tries to clean up the failure of his coup d’etat against President Maduro while he was working for President Trump.

This book, it should be noted, was the subject of a lawsuit recently by President Donald Trump because it exposes hidden truths of the White House as Bolton’s revenge towards the head of state, after been fired by him in September 2019. But a judge ruled Bolton could proceed with publication, inducing Trump to launch more threats.

Castillo shared his impressions of the book on the social network Twitter and said the most interesting thing, in his opinion, is not what Bolton details, but what he reveals: military invasions, links with drug traffickers, paramilitary groups, mercenaries and provocations in air and sea.

Bolton shoots in several directions. He justifies / tries to wash away his failure as the main operator of the coup in Venezuela. He presents Donald Trump as a coward, incapable, irascible and frivolous president, “more concerned with a non-existent wedding ring than with the national security of the United States,” Castillo wrote.

In the “Flag of Venezuela” chapter “Mike Pompeo appears as nullity in the shadows and the State Department as a sleeve of bureaucrats, who have sabotaged the noble effort to destroy Venezuela.”

“Mnuchin, the head of the Treasury Department, according to Bolton, is nothing more than an indifferent saboteur of the plan he designed. He portrays Mike Pence as an asshole. And even Obama is responsible for being ‘soft’ with Cuba. The Almagro OAS is destroyed by a phrase, “a dying institution,” he wrote.

The Venezuelan vice minister commented that Bolton’s work “is a model of disinformation. Beyond gossip, anecdotes and insidiousness, here is not the true plot of the coup against Venezuela. The criminal and real plot is the financial blockade, the looting of Venezuelans’ money. ”

On the deputy Juan Guaidó, Bolton in his book names him little and when he does, he uses third parties.” Sometimes he appears as a coward, incapable and without balls according to Trump and other times as an intelligent leader. “To be a Guaidó lover, Bolton sneaks his criticism in as “the clumsiness and laziness of his Venezuelan partners.”

The former adviser takes responsibility for the policy of sanctions against the Venezuelan oil sector, “for him the only way to break Maduro. He even says that at Guaidó’s request, he named the Citgo Board, once stolen from Venezuela.” Yes, a foreign bureaucrat named the board of one of the most important Venezuelan oil assets and mayor retailer of gasoline in the US.

“Bolton’s versions of January 23, February 23, March 7 (electrical sabotage) and April 30, 2019, dominated by a hallucinogenic vision of Venezuelan reality, are hilarious, stupid and pathologic lies,” Castillo said of the controversial text.