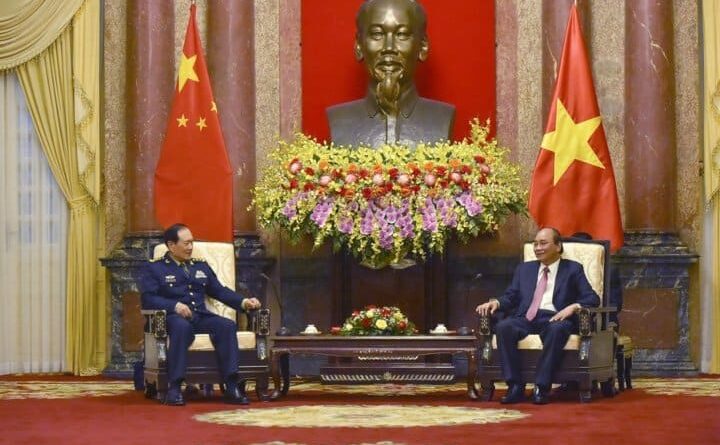 Vietnam and China fought an unfortunate border war in February and March of 1979, egged on by U.S. imperialist interference in the region. Nevertheless, relations between the two countries have steadily improved, based on a shared interest in peaceful socialist construction, resulting in deepening political and economic cooperation.

Currently, maritime disputes are the biggest threat to this long-lasting peace. Controversies have arisen around commercial fishing, oil exploration and other activities in the waters that China calls the South Sea, and Vietnam calls the East Sea. There are competing claims about control of various small islands.

One-third of the world’s trade passes through these waters. But the situation must also be understood in the context of U.S. military provocations; for example, this year, Washington has deployed a Navy strike group headed by the USS Theodore Roosevelt in the sea.

Despite ongoing disputes, both the Chinese and Vietnamese governments have firmly maintained that they will resolve all issues through dialogue and recourse to maritime law.

RELATED CONTENT: Vietnam Says it Will Not Side Against China, as US’ Kamala Harris Visits

In Xinhua News’ paraphrase, President Phúc said that “Vietnam will stay on guard against and firmly resist any schemes to undermine Vietnam-China relations, and will never follow other countries in opposing China.”

Further, they stressed that they must resist pressures from outside the region to interfere in the maritime disputes.

This is not an abstract concern. U.S. Vice President Kamala Harris arrived in Hanoi on Aug. 24. The thrust of her visit was to try to convince the Vietnamese government to become part of an anti-China alliance.

During the trip she said, “We need to find ways to pressure and raise the pressure, frankly, on Beijing to abide by the United Nations Convention on the Law of the Sea, and to challenge its bullying and excessive maritime claims.” Harris’s appeal to the U.N. is rich, considering that Washington has consistently flaunted the U.N.’s resolutions demanding an end to sanctions against Cuba and other unilateral imperialist bullying.

The Biden administration’s approach to the region is a continuation of Trump-era policies, as well as Obama’s “pivot to Asia.” The 2018 declassified report, “U.S. Strategic Framework for the Indo-Pacific,” lays out the overall strategy and goals. The first bullet point reads, “How to maintain U.S. strategic primacy in the Indo-Pacific region and promote a liberal economic order while preventing China from establishing new, illiberal spheres of influence, and cultivating areas of cooperation to promote regional peace and prosperity?”

The “peace and prosperity” bit is the most outrageous part. If they were serious about that, they would end their occupation of South Korea, stop providing weapons to the Duterte regime in the Philippines, etc. The generals in Washington would likely love to have a military base in Vietnam, but as part of its revolutionary sovereign policy, Vietnam does not allow foreign bases on its soil.

But the important thing here is that, despite considerable trade and diplomatic relations between Washington and Hanoi, the Socialist Republic of Vietnam is not on board with the U.S.-led anti-China coalition.