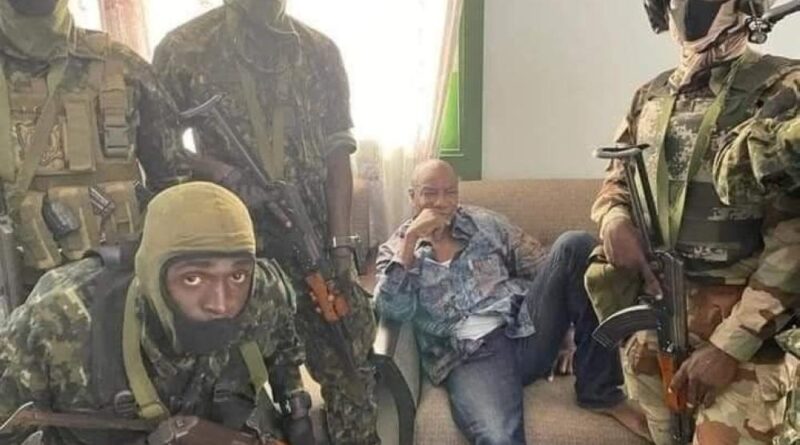 GUINEA: There has been a military coup in Guinea as the President, Alpha Conde has been deposed and arrested.

The Military Coup was led by Colonel Mamady Doumbouya at Presidential Palace in Conakry.

The military has shut down land and air borders are reportedly shut, suspended the constitution and dissolved the National Assembly.

How the Coup Happened
There were two hours of heavy gunfire across the capital Conakry after which the Colonel Mamady Doumbouya in a video declared that the military had taken control of the government of the country.

The video showed President Alpha Conde being held by soldiers, shoved into a vehicle and driven away. There are reports that he is being placed under house arrest.

Doumbouya explained that the coup became necessary because of the widespread corruption, poverty and the failure of Conde to deliver democratic dividends to the people of Guinea.

He said he was acting in the best interests of the nation of over 12.7 million people.

“The personalization of political life is over. We will no longer entrust politics to one man, we will entrust it to the people,” Doumbouya said.

Citizens were asked to remain at home and await further instruction on the direction of the government.

About the deposed President
83 years old Alpha Conde had won a third term of office in October 2020 despite criticism from people not to go for another term.

The President won a controversial election as he claimed that he got the will of the people to contest the third term as against the country’s two term limit.

President Alpha Conde was also alleged to have tampered with the constitution that enabled him to contest for the third term and the parliament increased his earnings.

Since independent, Guinea has been ruled by military. President Conde is the first democratic President of the country  but he is been accused of high handedness.

RELATED CONTENT: Mali is Just the Latest: US Africa Command Trained Troops Behind at least Seven Coups in Thirteen Years

Condé was born on 4 March 1938 in Boke in Lower Guinea. His parents were from Burkina Faso.

The coup in Guinea in West Africa is being executed by a Colonel. He is Colonel Mamady Doumbouya, the head of the country’s special forces.

For now, not much is known about the leader of the Coup but reports making rounds showed that he has been trained by the US and France.

Citizens’ Reaction
Unlike other coup situation, the citizens of Guinea has taken to the street to celebrate the detention of President Alpha Conde by the military.

Several videos on Twitter depict people celebrating in their houses and the street.