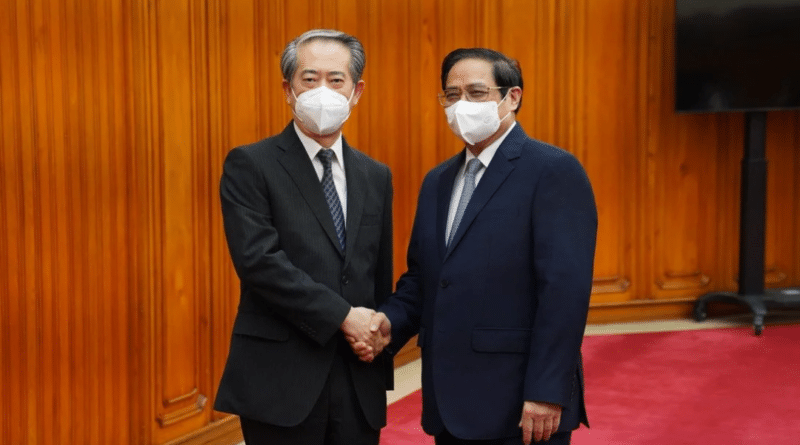 Vietnamese Prime Minister Pham Minh Chinh told China his country would not enter an alliance to confront Beijing, before he met US Vice-President Kamala Harris on Wednesday.

In a meeting on Tuesday with Xiong Bo, the Chinese envoy to Hanoi, Pham said Vietnam had always maintained an independent foreign policy that prioritised self-reliance, multilateralism and diversification of ties, the Vietnam News Agency reported.

Pham said Vietnam would not ally with one country to fight another, and wished to enhance political trust with China, promote exchange and uphold cooperation.

He also said the two nations should join the Association of Southeast Asian Nations (Asean) in stepping up the slow-moving negotiations for a code of conduct on the disputed South China Sea.

In Singapore, US VP Harris talks about South China Sea, US exit from Afghanistan and Covid-19

“The two sides need to strive to maintain peace and stability, satisfactorily settle disagreements at sea in the spirit of high-level common perceptions,” Pham was quoted as saying.

Xiong said during the meeting that the two communist nations had the same political system and beliefs.

He told Pham that China was willing to work with Vietnam and stick to the two countries’ high-level strategic directive to further develop ties, according to a Chinese foreign ministry statement.

Xiong also asked for Vietnam’s support in opposing what China says is the “politicisation” of Covid-19 origin investigations. Beijing has rejected the World Health Organization’s proposal for a new investigation that was to include revisiting the theory that the coronavirus came from a lab leak in Wuhan, China, where the virus was first reported in December 2019.

Harris, who is conducting a tour of Asian countries, met Pham and President Nguyen in Hanoi later on Wednesday.

She told Vietnam’s leaders that Washington wanted to upgrade their relationship to a strategic partnership, as she urged Hanoi to challenge what she described as Beijing’s bullying in the South China Sea.

The US vice-president also pledged Washington’s help in boosting Vietnam’s maritime security, offering more visits by US warships as well as the donation of a third US Coast Guard ship – subject to approval by US lawmakers.

“We will work closely with Vietnam to uphold rule-based international freedom of navigation, an issue that we take seriously, [including how] it relates to the South China Sea,” Harris said on Wednesday before the meeting.

“We need to find ways to pressure and raise the pressure, frankly, on Beijing to abide by the United Nations Convention on the Law of the Sea, and to challenge its bullying and excessive maritime claims.”

Her visit came with US credibility in the region being questioned following the chaos in Afghanistan. The withdrawal of American troops from the war-torn Central Asian nation has triggered concerns over whether Washington may also withdraw from its commitments in the Indo-Pacific.

On the eve of Harris’ arrival, China donated an additional 2 million Covid-19 vaccine doses to Vietnam.

There has been a massive surge in coronavirus infections in Vietnam, with 10,397 new cases and a record 389 deaths reported on Monday.

Xu Liping, an expert in Southeast Asian studies at the Chinese Academy of Social Sciences, said the Xiong-Pham meeting had indicated the unchanged foundation of China-Vietnam ties, but Beijing could not ignore how hard the US was working to win Vietnam over.

“The US has expressed the wish to upgrade bilateral relations,” Xu said. “This is what Vietnam has always wanted. The US has also made more concrete promises to Vietnam on multiple fronts including security, pandemic containment and economic cooperation.”

>During Harris’ visit, the US donated Vietnam an additional 1 million Pfizer Covid-19 vaccine doses, which would start arriving in the next 24 hours.

“As China’s close neighbour, Vietnam is concerned how recent gestures from the US might affect its relationship with Beijing,” Xu said. “That’s why we are seeing the meeting with the Chinese ambassador before Harris’ visit, affirming ties with China are still a priority.”

Mimi Lau covers human rights, religion and civil society in China. She spent seven years in southern China as the Post’s Guangzhou Correspondent before returning to Hong Kong in 2017. Today, Mimi continues to pursue stories across the country, monitoring and reporting on key political and civil issues. She has won numerous awards for her work.