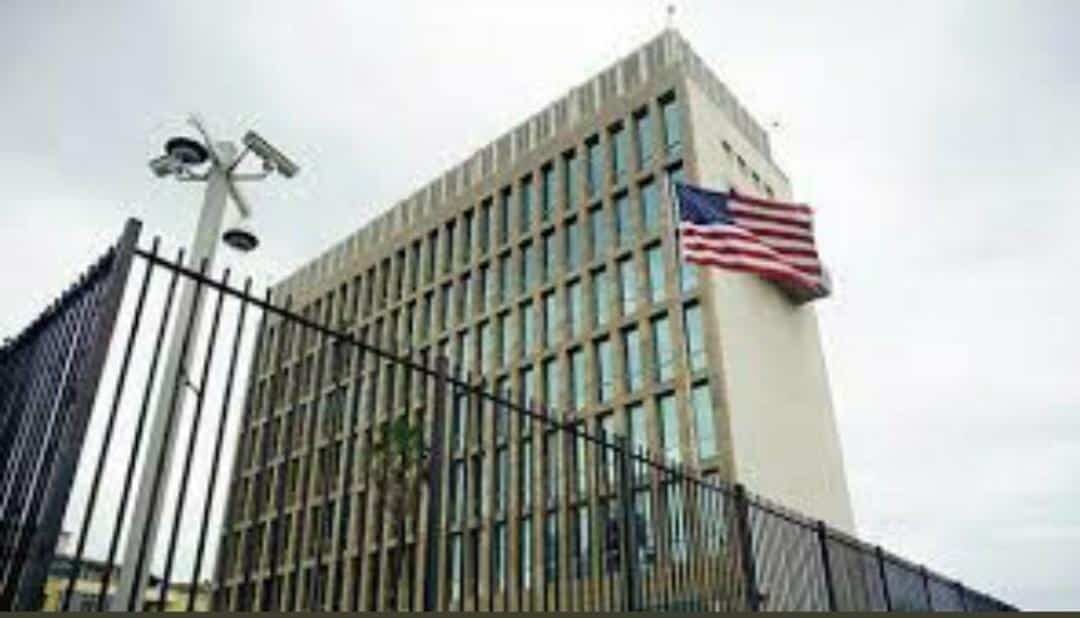 US Embassy in Havana. Photo: Minrex

Olga Lidia was very hesitant at first, when it was proposed her to reach the United States irregularly through Central America. At her age, she believed she was not physically fit to undertake a journey that would take her through countries, jungles, rivers and put her life in the hands of several coyotes. What she was not prepared for was getting separated from her daughter on the day that the traffickers told her that her relatives in Miami had not paid the full price agreed upon before the start of the journey.

Michel sold all his belongings in Camagüey to travel three times to Guyana with his wife, hoping to obtain visas to legally enter the United States. The last time he experienced perhaps the biggest surprise, when his application was approved, but his wife’s was not, under an argument that he could not understand. They embraced as they left the US consulate, uncertain about whether they should stay together, or separate, so that each would have to bet on their own luck.

Olegario had become accustomed in recent years to travel regularly to Tucson, Arizona, to see his grandchildren, until in 2019 they drastically suspended flights from Cuba. He always thought the worst thing about the trip was having to get on a plane twice and endure the turbulence. So when it was explained to him that this time it would be only one flight to Managua and then he would have to continue by road, he did not dismiss the idea. Everything changed the day when the bus in which he was traveling plunged into a ravine and he saw his life flash before his eyes until it was extinguished.

These three characters and their respective circumstances are fictional, but at the same time they represent the experiences of thousands of Cubans, who overnight had to change their life plans, stop seeing their relatives, or were forced to make crazy decisions, for the simple reason that as of 2017 the US government decided not to respect the migration agreements signed with Cuba in 1994, 1995 and in January of that year.

RELATED CONTENT: Cuba and US Agree to Resume Visa Applications in Havana from May

After the last of these agreements both countries had managed to reduce the number of arrivals of Cubans through irregular means at the US borders to an inconsequential number. This could be interpreted as obtaining the US’ most cherished goal with regards to its migratory relations with any neighboring country, which so far has only ever been achieved with Cuba.

In the years immediately prior to 2017, US authorities had been complying not only with the commitment to grant 20,000 or more immigrant visas for Cuban applicants, but it had also introduced new practices, such as multiple-entry visas for five years, all of which made human movement from both shores more predictable.

But the situation changed in the blink of an eye, starting with the fabrication of the argument of alleged “sonic attacks” against US diplomatic personnel in Havana, a rather primitive justification for closing the consular services of that mission. Today it is known that it was all a crude fabrication and that its promoters have received large sums of money in return.

After a year of being elected, and being in absolute silence about the normalization or rejection of such services, Joe Biden’s administration announced this past March 3 that it would “initiate the limited resumption of some immigrant visa services as part of the broader expansion of the functions” of its embassy in Cuba.

This type of news in itself generates mobilization and affects states of opinion and expectations of many families. In the United States it is a practice that these announcements are made as trial balloons, to know what support or rejection they generate in the population or in the political media.

Therefore, when the State Department said on April 6 that the resumption of immigrant visa processing would begin in May and would only be for parents of US citizens, it also indicated that the burden of service would remain in Georgetown, Guyana, and suspicions were raised as to the real purpose of the original announcement.

Even without having changed anything in practice, the 34th round of migration talks between the two countries took place on April 21, in which the two delegations ratified the validity of the agreements in that matter and the Cuban representatives referred to the nonsense of forcing potential migrants to travel to Guyana to do the paperwork from there.

It was not until May 3 that the press media used by the US government for its official campaigns began to talk about the “resumption of migratory procedures” in Havana, without any further details, and thus sowing new doubts.

It is worth mentioning that all this informative exchange was taking place in the midst of other US actions being done through third parties, supposedly to reduce the possibilities of Cuban travellers who left their country legally initiating into an irregular traffic pattern to the United States.

Ultimately, on May 16 the White House assured its willingness to respect the total of 20,000 annual visas for Cuban emigrants, but with the requirement of processing the vast majority of applications in Guyana, not Havana. On June 9, the US embassy in the Cuban capital informed that in addition to visas for parents of US citizens, it would consider spouses and children under 21 years of age.

But the truth is that none of these categories contribute to the total of 20,000 visas per year, agreed to under the immigration agreements, and that consular procedures in Havana remain very restricted and new limits are still being imposed.

For example, while in the past medical check-ups for potential migrants could be performed in Cuban provincial hospitals, at the moment the embassy only accepts those performed in a single hospital in the capital. Why, you ask?

Step by step, the resumption of flights between Florida and several Cuban airports outside Havana have begun since in mid-June, an action that also generates more demand for consular activity by the respective diplomatic headquarters.

There is no plausible justification for the mess generated around this issue. It has already been demonstrated that the arguments used to generate this crisis were false, with the clear intention of closing the legal migratory channel to increase the “pressure on the social pot” in Cuba. Nothing new under the sun.

RELATED CONTENT: Biden and Cuba: What can be Expected?

Although it is not a topic commonly addressed by the media, these tenuous changes also respond to enormous pressure exerted by Cubans living in Miami and other cities, not represented by the traditional political clique, which in response came to generate proposals as absurd and outdated as transferring consular procedures from Guyana to the illegal Guantanamo Naval Base.

All that remains to be seen now is whether the White House maintains sovereignty over foreign policy towards Cuba, or whether it bows in genuflection to the Republican operatives in Florida, or to the underworld in Union City. They should have realized by now that both complacencies led them to make fools of themselves at the recent unpopulated summit in Los Angeles.

At a later date we will address the likely economic compromise between US elected officials and human traffickers, where the latter have seen their pockets swell profusely in recent years thanks to the actions of the former.

Perhaps the fainthearted will act in time and save others like Olga Lidia, Michel and Olegarios.

José Ramón Cabañas Rodríguez served as Cuba’s Ambassador to the US from 2012 – 2020, he is currently Director of the MINREX Center for International Policy Research.