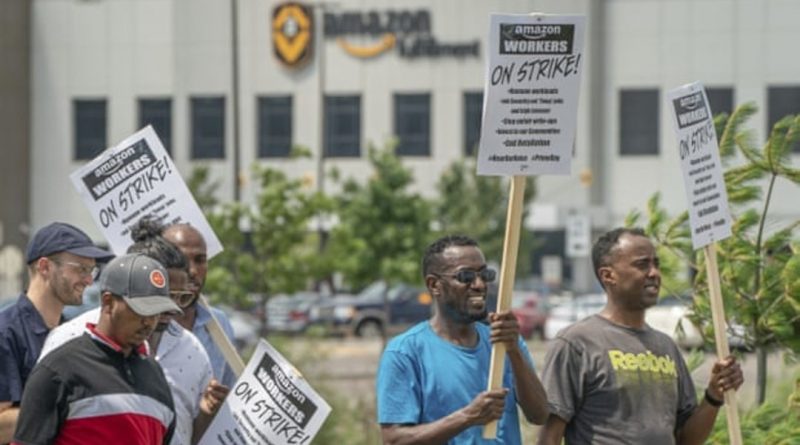 Bosses, police and “loss prevention” specialists lined the entrance and exits. Workers were told that the work stoppage would be taken out of their unpaid time off allowance. Amazon workers risk being fired if they go beyond their 20 hours a quarter of unpaid time off regardless of the reason.

Passing trucks honked in agreement and some turned away. Captain Michael Russo, a pilot with one of the Amazon contracted carriers, from Teamsters Local 1224, spoke in solidarity. Tech workers representing Amazon Employees for Climate Justice came from Seattle, where a simultaneous protest was held. Two hundred of these workers wrote messages of support.

Kim Hatfield, a Texas Amazon worker who lost her job after a stress injury caused by production rates, flew to the Shakopee rally in support.

Sharo Shariff, a Shakopee Amazon worker, exclaimed to cheers: “We are here because we are human. We are not robots!”

The primary issue that has propelled the workers into action is the highly exploitative production rates that are almost impossible to perform. As workers have described, Amazon expects human beings to keep up with the pace of robotics, which has earned the slogan: “We are not robots!”

For a description of production rates see An Amazon worker tells all, Part 2: 21st century exploitation

The Prime Day protest was backed and organized by the Atwood Center, which primarily represents the East African Muslim community, the largest percentage of workers at this fullfillment center. In fact, Amazon recruited heavily from Minneapolis’ neighborhood of Cedar-Riverside, nicknamed Little Mogadishu.

The Atwood Center has support from the Service Employees International Union (SEIU) and the Council on American-Islamic Center (CAIR). The Teamsters have also lent support.

Their organizing began in 2017, when Amazon cut funding for direct bus service to the warehouse and workers collected petitions to restore the service. While they didn’t win this initial battle, the Atwood Center and the workers took up several very successful campaigns to force Amazon to provide proper breaks and prayer rooms during Ramadan, an important religious period for Muslims.

Ramadan fell during the 2018 Prime Day, and many of the workers were afraid that the brutal production rates would become impossible for those fasting. As a result of protests, management agreed to prayer rooms and temporarily lowered quotas. This was a small but also a large victory, since it was one of the first times that Amazon bosses negotiated with an organized group of workers.

Protests in the U.S.

In Portland and Hillsboro, Ore., workers at two different warehouses held protests during the July 15th week against working conditions. Complaints have been filed with the Occupational Safety and Health Administration for safety violations: primarily dust, vehicle emissions and heat. Workers described the deafening noise and the breakneck pace of trucks and vehicles lined up to be loaded.

At Chicago’s DCH1 warehouse, a group of about 30 Amazon workers gathered in management’s offices to put forward demands for air conditioning, health insurance and $18 an hour for work during Prime Days.

Along with supporting the strikes and work actions, supporters also protested at Amazon offices, warehouses and even Bezo’s $80 million condo on Fifth Avenue in New York City to demand that the billionaire halt the providing of facial recognition technology to U.S. Immigration and Customs Enforcement (ICE). Recently, Amazon announced its decision to provide the intrusive facial recognition software to ICE, a technology globally recognized as a human rights violation. Right before Prime Day, hundreds of protesters gathered at the Javits Center to call for an end to Amazon’s contracts with ICE.

In Baltimore, Amazon workers, youth and community activists rallied at City Hall to support the Shakopee workers and to announce a two-fold campaign: one to continue to gather signatures to demand Amazon stop enabling ICE raids and the other to demand justice for Amazon workers. A former Amazon worker, Steven Ceci, explained that “exploitation at Amazon is a community issue, it’s a civil rights issue, and it’s a worker’s issue.” Ceci is from the People’s Power Assembly and part of the newly founded Workers and Peoples Union. Another Amazon worker explained that the group’s purpose was to provide the kind of community support to buoy workers in their fight for justice. The group has been petitioning and distributing flyers at Amazon’s bus stops.

The online tech journal and blog The Verge published a piece on how the Baltimore Amazon warehouse fired 300 workers as a result of workers not being able to keep up with the grueling rates of production.

Baltimore activists have described the Amazon’s Baltimore and Maryland fulfillment centers/warehouses as “a meat grinder,” which lures workers in with a slightly higher pay rate than other similar jobs in the area, but ends up as a revolving door for workers with a huge turnover rate. More than 2,000 workers participated in the German strikes.

Protests and work actions were also held in Britain, Ireland and Spain.

Beacon for the future

The strikes and protests during Prime Day are a small but serious beacon for the future. The courage of the East African Shakopee workers, who acted without a union contract to back them and in an atmosphere where union membership has dropped to a mere 10 percent in the U.S., has lit the spark.

Much more must happen to keep the flame burning, but it behooves everyone to join this fight. Bezos may be the richest person in the world. Amazon may be seemingly all powerful. But the Amazon workers globally outnumber all of their bosses, and when their power is organized, nothing will be able to stop them.