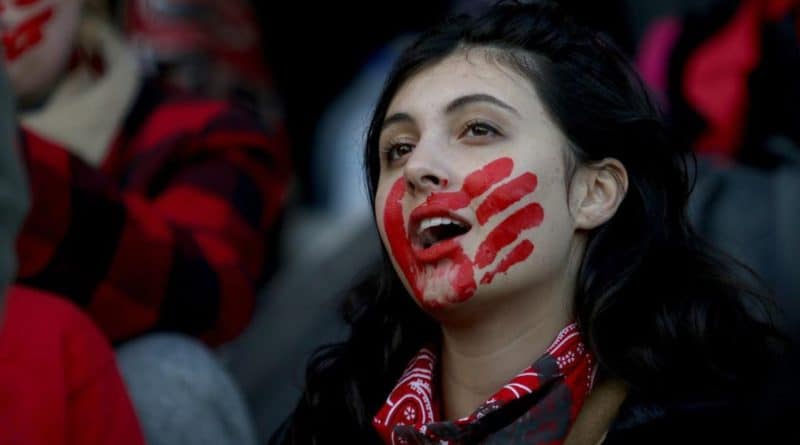 Ottawa—The federal government is getting dragged into a spiralling protest movement as blockades and demonstrations of solidarity with Wet’suwet’en chiefs in British Columbia spread across the country, snarling passenger train traffic and the shipment of goods.

Facing sit-ins at their offices in Toronto and Ottawa, Liberal ministers Carolyn Bennett and David Lametti separately spoke with demonstrators about their demands in support of Indigenous leaders in northern B.C. who oppose construction of the already-approved Coastal GasLink pipeline.

Lametti said he would bring demonstrators’ demands to the federal cabinet, even as the government insists the pipeline project and actions of the Royal Canadian Mounted Police to arrest people blocking its construction fall outside Ottawa’s control.

Cricket Guest, an Anishinaabekwe Métis who demonstrated with Indigenous youth and climate change activists in Toronto on Tuesday, said disruption of traffic and business goods is “absolutely necessary” to bring attention to the injustices inflicted by the government and police on Wet’suwet’en in B.C.

“Reconciliation is dead and we will shut down Canada until Canada pays attention and listens to and meets our demands.”

Guest said those demands include implementing the United Nations Declaration on the Rights of Indigenous Peoples at the federal level, suspending the court injunction against blockades of the Coastal GasLink and calling on the RCMP in the region to stand down.

But Federal Transport Minister Marc Garneau said Tuesday that it was “dangerous and illegal” for Indigenous groups and their supporters to block rail lines near Belleville, Ont., Halifax, Montreal and New Hazelton, B.C.

Garneau said the disruption of railways across Canada can have a huge impact, as more than $300-billion worth of goods are transported over the network every year.

The rail disruption has forced already cancelled Via Rail traffic for more than 24,000 travellers, the company said Tuesday, while CN Rail released a statement saying it has cancelled “hundreds of trains” since the blockades began Feb. 6. The company said the blockades are “harming the country’s reputation as a stable and viable” trading partner, and warned it could be forced to shut down “significant parts” of its Canadian network as parked trains fill available space with containers of perishable food, fuels like coal and propane, de-icing fluid for airports, and other goods.

The company also said it has been granted court injunctions against the blockades in Ontario and B.C. and is working with local authorities to enforce them.

Garneau told reporters in Calgary that it is up to the provinces to enforce those orders. “It’s a complex issue and hopefully we will be able to resolve this as quickly as possible,” he said.

Tensions over the Coastal GasLink project flared up in recent weeks after the company building the natural gas pipeline, TC Energy, obtained an injunction against any construction blockades from B.C.’s top court. While all 20 elected First Nations band councils from the region have signed benefit-sharing deals connected with the project, hereditary chiefs of the Wet’suwet’en nation have claimed the pipeline can’t proceed through unceded traditional territory without their consent.

The 670-km pipeline would carry natural gas from northeastern B.C. to a port in Kitimat, where a conglomerate of companies is building a $40-billion export terminal that Ottawa has boasted as the largest private-sector project in Canadian history.

As RCMP in B.C. enforced the court order to clear demonstrators blocking the pipeline construction, arresting 21 people in recent days, demonstrations in support of the Wet’suwet’en sprung up across the country, sparking questions about Ottawa’s commitment to Indigenous reconciliation and calls for Prime Minister Justin Trudeau to meet with the chiefs opposing the project.

In Victoria, hundreds of protesters blocked entrances to the B.C. legislature, chanting “shame” and “shut down Canada.” The government there was forced to cancel parts of the ceremony surrounding its throne speech scheduled for Tuesday afternoon.

Outside Belleville, the blockade of CN tracks near Tyendinaga Mohawk Territory continued for its sixth day, while demonstrators from the Kahnawake Mohawk community south of Montreal blocked commuter trains into Quebec’s biggest city. More Wet’suwet’en supporters blocked traffic along the CN line in B.C. between Prince George and Prince Rupert.

Some federal ministers are facing protests of their own, as Indigenous youth protesters staged sit-ins Tuesday at the justice department near Parliament Hill, where they met with the minister’s chief of staff, and at Bennett’s constituency office in north Toronto.

In a written statement, Bennett’s office confirmed she met with demonstrators Tuesday, but reiterated that police action and the pipeline are under B.C.’s authority. “The Minister will continue having important conversations with concerned members of the community about their priorities, including the climate change emergency and reconciliation with Indigenous peoples,” the statement said.

Speaking in Vancouver, Environment Minister Jonathan Wilkinson echoed the federal government’s stance that the Coastal GasLink disagreement is a provincial matter — and that RCMP officers making arrests are doing their jobs.

“At the end of the day we do, though, expect Canadians to abide by the law, and the RCMP is enforcing a court order,” Wilkinson told reporters.

Correction – Feb. 13, 2020: This article was edited from a previous version that mistakenly said the pipeline would carry liquified natural gas.