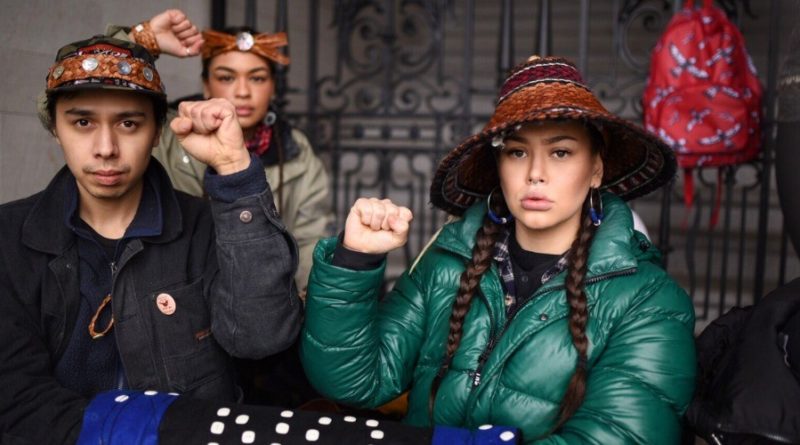 “We are in absolute outrage and a state of painful anguish as we witness the Wet’suwet’en people having their Title and Rights brutally trampled on and their right to self-determination denied.”

Climate action campaigners and Indigenous leaders on Thursday condemned a violent pre-dawn raid by the Royal Canadian Mounted Police at a camp set up by Wet’suwet’en land defenders in British Columbia.

Dozens of RCMP officers—backed up by dog teams, drones with infrared sensors, and tactical officers armed with “what appeared to be sniper and assault rifles,” according to VICE—arrived at the Unist’ot’en Camp near Houston, British Columbia shortly before 5:00 am, a month after the Wet’suwet’en evicted Coastal GasLink from their land.

“Using armed force to take Indigenous peoples off their unceded traditional territories against their will is not reconciliation, it is colonialism in all its ugliness and hypocrisy.”
—Chief Don Tom, Union of British Columbia Indian Chiefs

The company plans to clear a logging road in Wet’suwet’en territory to make way for a pipeline which all five Wet’suwet’en clans have unanimously opposed under the tribe’s code of laws, known as Anuc niwh’it’en. In 1997, the Canadian Supreme Court ruled that the Wet’suwet’en had not given up rights to their land—more than 8,000 square miles in British Columbia.

“We are in absolute outrage and a state of painful anguish as we witness the Wet’suwet’en people having their Title and Rights brutally trampled on and their right to self-determination denied,” Grand Chief Stewart Phillip of the Union of British Columbia Indian Chiefs (UBCIC) said in a statement Thursday.

The Wet’suwet’en hereditary chiefs ordered Coastal GasLink off their land last month, days after the British Columbia Supreme Court ruled that Canadian law trumps tribal law and that the company had suffered “irreparable harm” when the Wet’suwet’en built blockades and camps to stop the construction of the $6.6 billion pipeline project. The court issued an order demanding that the Wet’suwet’en leave the territory.

The hereditary chiefs were in talks with British Columbia officials earlier this week regarding the pipeline, and, according to the tribe, “Coastal GasLink agreed not to enforce the injunction for a period of seven days” during the talks.

“Using armed force to take Indigenous peoples off their unceded traditional territories against their will is not reconciliation, it is colonialism in all its ugliness and hypocrisy,” said Chief Don Tom, vice president of the UBCIC, on Thursday.

During Thursday morning’s raid, according to VICE, RCMP officers told the Wet’suwet’en land defenders they were acting on the earlier court injunction and that they had 10 minutes to leave the camp, under threat of being charged with obstruction of justice.

The police smashed in the window of a truck and “dragged out a woman who was naked and had locked herself inside,” VICE reported. At least six people were handcuffed and arrested.

The land defenders yelled, “Shame on the RCMP! Shame on the colonizer!” during the raid, according to the outlet.

I just got out from #Gidimten clan territory on #Wetsuweten yintah, where RCMP conducted an aggressive, pre-dawn raid. Six land defenders arrested: pic.twitter.com/JkKempHUGM

Greenpeace Canada called on Canadian Prime Minister Justin Trudeau and British Columbia Premier John Horgan to “immediately order the RCMP to stand down” and to “engage in peaceful discussions with the Wet’suwet’en hereditary chiefs.”

“Greenpeace condemns the violation of human rights underway against the Wet’suwet’en camps and people, who are the rightful title holders over their lands and waters and who are peacefully exercising their Indigenous rights to resist the Coastal GasLink pipeline,” said Christy Ferguson, executive director of the organization. “It is unacceptable for Canada to deploy militarized police against Indigenous land defenders and other peaceful protesters.”

The group also called on supporters of Indigenous rights to display solidarity with the Wet’suwet’en by contacting Trudeau and Horgan and attending events including several a rally at the British Columbia legislature.

Indigenous youth are locked down at the British Columbia legislature in solidarity with #Wetsuwetenhttps://t.co/Pbihq7d3sa

Out here at Wet'suwet'en solidarity rally on Hastings to say removing indigenous peoples from their territory is wrong. Simple as that but Canada still doesn't get it. #WetsuwetenStrong #bcpoli pic.twitter.com/2cAQTQQO5W

"We will not bow down and accommodate the systems that oppress us!" @Goldmund8 speaking truth to power at a #Wetsuweten solidarity rally in so-called Vancouver. #WetsuwetenStrong pic.twitter.com/q86C6JWbs0

“All Wet’suwet’en Clans have rejected the Coastal GasLink fracked gas pipeline because this is our home,” said the land defenders in a statement. “Our medicines, our berries, our food, the animals, our water, our culture are all here since time immemorial.”