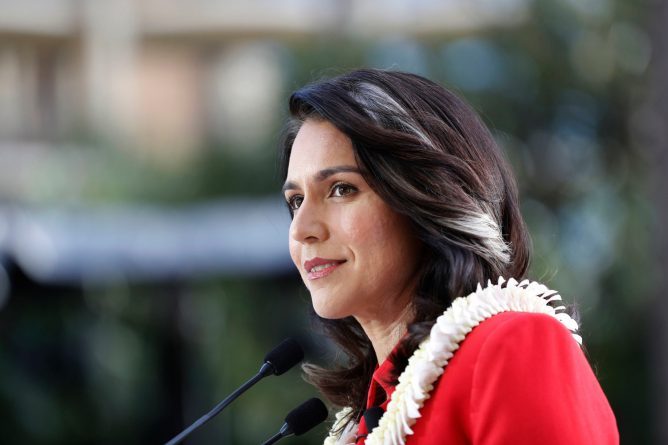 That was followed by the sub headline: “The Hawaii congresswoman is quickly becoming the top candidate for Democrats who think the Russian leader is misunderstood.”

The Gabbard campaign has received 75,000 individual donations. This crazy Beast article is based on (maybe) three of them.

The three names are professor Stephen Cohen, activist Sharon Tennison and someone using the name “Goofy Grapes,” who may or may not have once worked for comedian Lee Camp, currently employed by Russia Today.

This vicious little article might have died a quiet death, except ABC’s George Stephanopoulos regurgitated it in an interview with Gabbard days later. The This Week host put up the Beast headline in a question about whether or not Gabbard was “softer” on Putin than other candidates.

This in turn spurred another round of denunciations, this time in the form of articles finding fault not with the McCarthyite questioning, but with Gabbard’s answer. As Politico wrote: “’Fake news’ is a favorite phrase of President Donald Trump…”

Soon CNN was writing a similar piece, saying Gabbard was using a term Trump used to “attack the credibility of negative coverage.” CNN even said Gabbard “did not specify what in the article was ‘fake,’” as if the deceptive and insidious nature of this kind of guilt-by-association report needs explaining.

“Stephanopoulos shamelessly implied that because I oppose going to war with Russia, I’m not a loyal American, but a Putin puppet,” Gabbard told Rolling Stone. “It just shows what absurd lengths warmongers in the media will go, to try to destroy the reputation of anyone who dares oppose their warmongering.”

Gabbard has had some “controversial” views, having been raised in a conservative religious home, the daughter of a right-wing radio personality in Hawaii who once described homosexuality as “not normal” and “morally wrong.” She later wrote of a political conversion on issues like LGBT rights, but still angered Democrats in the Obama years by invoking an infamous Republican criticism, i.e. that the president refused to use the term “radical Islam.”

Frankly, all the Democratic presidential candidates have controversial statements in their pasts, in some cases boatloads of them (see here, for example). The difference with Gabbard is her most outspoken positions cross party orthodoxy on foreign policy, particularly on war – she is staunchly anti-intervention, informed by experience seeing a failed occupation in Iraq up close — and are therefore seen as disqualifying.

She’s Exhibit A of a disturbing new media phenomenon that paints people with the wrong opinions as not merely “controversial,” but vehicles of foreign influence.

“This is how they control self-serving politicians whose only concern is their career,” Gabbard says. “Unfortunately for them, I am a soldier — not a career politician.”

A transparent hit piece came out as Gabbard was announcing her run. NBC reported “the Russian propaganda machine” is “now promoting the presidential aspirations of a controversial Hawaii Democrat.” The article among things was sourced to New Knowledge, a cyber-analysis firm claiming it had caught Russian “chatter” about Gabbard’s “usefulness.”

This was after the New York Times did a piece outing New Knowledge as having faked exactly this kind of activity in an Alabama Senate race between Democrat Doug Jones and Republican Roy Moore. In that incident, the paper got hold of a memo in which the firm admitted it had “orchestrated an elaborate ‘false flag’ operation that planted the idea that the Moore campaign was amplified on social media by a Russian botnet.”

For NBC to use New Knowledge as a source after this was bad enough. The Daily Beast piece is something beyond, rhetorically. Even during the depths of War on Terror hysteria, we didn’t see Fox headlines stating: “JOHN KERRY: TOP CANDIDATE OF PEOPLE WHO THINK BIN LADEN IS MISUNDERSTOOD.”

The tactic of making lists of thought criminals first reappeared a few years ago, when the shadowy PropOrNot group was profiled in the Washington Post. In this case, the definition of what the Daily Beast calls people pushing “the Russian government line” overlaps with views that are merely anti-interventionist or antiwar in general.

“They smear anyone who is against regime change wars,” says Gabbard.

This applies really to all of the people mentioned in the Beast piece, even Camp, whose inclusion is also ridiculous because it’s not 100% clear “Goofy Grapes” even has a connection to him (and if he does, are we in guilt-by-association-by-association land now?).

Tennison belongs to a type I saw a lot of in Russia, i.e. people who grew up under the shadow of nuclear conflict and perceived bad relations between the U.S. and the Soviet Union to be the world’s biggest threat to security. This was a big progressive craze in the Reagan/Bush years, when people like CNN founder Ted Turner were creating the “made for détente” Goodwill Games. Tennison has a long history of such “friendship” activities and is said to have brought AA to Russia.

Re Cohen: if accepting a check from him is now a treasonous offense, a lot of Democrats are going to have to send money back. I’ve known Steve a long time and though we’ve had disagreements, outlets like The Beast have frequently villainized him for saying things any Russia expert would know are true, like that the U.S. did meddle in Russian affairs after the Soviet collapse (particularly in 1996).

The other anti-interventionist candidate, Bernie Sanders, had his own gross press misadventure of late.

Sanders joins Gabbard in having been tabbed a Kremlin project countless times since 2016. The latest New York Times piece, about the “left-wing activism” of Sanders, hovers around this dreary foreign-subversion theme. The headline revelation was about a trip Sanders made to Managua in the eighties, where he may have attended a rally. The Times explains: “At the anniversary celebration, a wire report described a chant rising up: ‘Here, there, everywhere, the Yankee will die.’”

In a subsequent interview with Times writer Sydney Ember, Sanders responded, when asked about this, “They were fighting against American — huh, huh — yes, what is your point?” He then noted he didn’t remember that particular chant.

This is really silly gotcha journalism (especially since it’s not clear what language the chant was in). Ember asked Sanders if he would have “stayed at the rally” if he’d “heard that directly.” Elsewhere, she asked why Sanders once said the Soviets had a good public transportation system and free health care, and if he believed he had an “accurate” view of Nicaraguan leader Daniel Ortega.

Sanders at first didn’t respond, then spoke and was short with the reporter, seeming exasperated as he explained the context of decades of American interventions in Chile, Guatemala, Brazil and other South and Central American countries. He tried to explain that his “view” of Ortega was irrelevant because he was really protesting the policy of intervention, not supporting the foreign leader.

The whole episode was a Back to the Future version of the same criticisms leveled at anyone who opposes regime change in Venezuela today — if you protest the policy, you’re not antiwar, you must support the targeted foreign leader.

“This was not about Ortega,” Sanders said. “Do you understand?”

His curt response inspired author and Times columnist Jill Filipovic to write that Sanders was “shockingly rude,” adding: “We already have a president who attacks the press, condescends and refuses to answer questions he deems stupid.”

Bernie Sanders is not Trump. Neither is Tulsi Gabbard, nor anyone else but Trump, for that matter. It’s a preposterous take. It’s worse than fake-news: It’s self-fulfilling news.

In 2004, Howard Dean was asked repeatedly if he was “too left” or “too liberal” in campaign stops. You would see lines like, “addressing concerns that he is too liberal to be president…” in coverage. It was nearly a mandatory preamble to Dean stories.

On the trail, I watched Dean take in these questions. Over time, you could almost hear his teeth grind at words like “left” or “liberal.” Eventually he did start to flip out.

When he did, suddenly his “testy” demeanor and “combative,” “finger-thrusting” style earned write-ups of their own, culminating in the campaign-ending “Dean Scream” story. Reporters once reveled in the power to make or break candidates with these circular, quasi-invented narratives.

These smear jobs don’t work the same way they once did. Trump in 2016 clearly used impatience with media tactics as part of his strategy. The more he brought trail reporters into stump speeches by calling us things like “bloodsuckers” (“enemy of the people” didn’t come until later), the better he did with crowds.

Reporters refuse to see it, but the national media now lives on the unpopularity spectrum somewhere between botulism and congress. While some of that is undeserved, some of it isn’t. Voters especially resent being told who is and isn’t an acceptable choice, by a press corps increasingly seen as part of a corrupt and condescending political establishment.

Stories like “Tulsi Gabbard Is the Top Candidate of Traitors” represent exactly the kind of thing people hate about the commercial press as an institution. This scarlet lettering backfired badly in 2016, but we’re doing more of it this time around, not less. Don’t be surprised if it ends badly again.