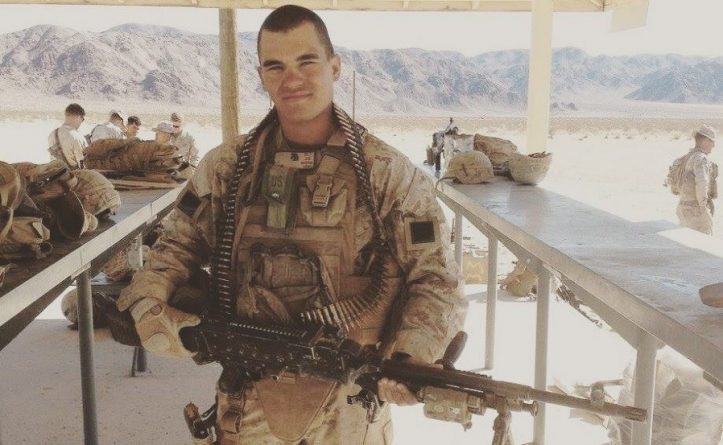 Far-right Venezuelan opposition activist Luis Medina, a former US Marine and volunteer for Juan Guaido’s aid stunt, told CODEPINK embassy defenders “we are coming to get you with plenty of ammunition.”

Editor’s note (May 22): This article was updated afer publication with a statement from Luis Medina. It was also updated with links to social media posts that Medina deleted after the publication of this article.

A far-right Venezuelan opposition activist emailed a death threat to human rights activists from the peace group CODEPINK. The threat was delivered when CODEPINK was helping to protect the Venezuelan government’s embassy in Washington, DC from an illegal takeover by Juan Guaidó’s US-backed coup administration.

This rabid opposition activist, a staunch supporter of Donald Trump, previously served as a machine gunner for the US Marine Corps, and was in the US military reserves until this March. He also was on the Colombia-Venezuela border with violent opposition activists, working with an ostensible “aid group” run by coup leader Juan Guaidó, during a failed US-backed putsch in February.

On May 2, Luis Medina sent CODEPINK an email with the subject line, “Warning some Venezuelans may do something.” In the message, the opposition fanatic identified as a “Venezuelan born US marine veteran.”

“You got 48 hrs to leave the Embassy !!! If you stay in the Venezuelan embassy one more day … we are coming to get you with plenty of ammunition,” Medina wrote.

“This is a credible report,” he added.

Information on his publicly available LinkedIn profile and social media accounts reveal that Medina, who is 27 years old, was born in Venezuela, but left when he was 13. He has lived in the United States since, and is now a US citizen. (Editor’s note: Medina took down his LinkedIn profile after this article was published.)

On his social media accounts, Medina expresses strong support for Donald Trump and publicly calls for the US government to “Bomb the maduro regime.”

Luis Medina threatens legal action
After this article was published, Luis Medina sent a private message on Twitter to the author, Ben Norton, threatening The Grayzone with a lawsuit. He also emailed the same statement to Norton and The Grayzone.

Medina claimed that when he told CODEPINK “we are coming to get you with plenty of ammunition,” by “ammunition” he meant “law and words.” Medina also called on Norton to take down this article, offering insights for another story if he agreed to do so.

After this article was published, Medina sent nearly 20 tweets to The Grayzone and Norton. He changed his name on Twitter to “0331 machine gunner” and altered his profile bio to read, “free the oppress and kill the tyrant.”

“You are slandering my name and defaming me with no evidence of “death threat “ in fact annunciation can be interpreted as law and words that Venezuelan activist were using against the far left activist code pink were arrested for breaking the law. Furthermore , I am will be contacting my lawyers soon and suit you if you do not take down the defamation material , one I don’t own a gun , 2 it clearly says some Venezuelans May do something regarding words and law enforcement to end the illegal occupation . The subject line right away shows That this doesn’t involve me. I am going to contact my lawyers and I hope you can bring your evidence to court . This is completely unnecessary and unacceptable I am an aid worker who was helping Venezuelan refugees in Colombia long before the 23rd of February, you should come down to cucuta with me and see people starved that we help . To clarify US Aid was cited by me due to not knowing how to explain what volunteers for Venezuela was , but I did distribute US aid .

I will give you insight”

Medina was deployed to Djibouti, according to his bio, where he participated in counter-piracy operations in the Gulf of Aden. In Southeast Asia, Medina was a military advisor who oversaw the training of soldiers in Taiwan and the Philippines.

In a video interview on a Venezuelan pro-opposition YouTube channel, Medina claimed that he engaged in “anti-terrorism operations” with the US military in Jordan and Oman. On Instagram, Medina posted photos from his tour with the Marines in Africa, and blamed the region’s problems on Islam, writing, “These poor people suffer, war, hunger, and death. All because of a religion.”

Medina also said he trained Taiwanese soldiers to defend their territory against “any communist aggression from China.” On Instagram, he published video of the trainingin Taiwan. He also posted a photo standing on a communist flag, alongside a quote from Ronald Reagan.

In the video interview on YouTube, which was published on February 16, Medina said that he is still an inactive reservist in the US military. On March 27, Medina posted a photo on Instagram showing that he had been honorably discharged from the Marine Corps, after four years active duty and four years in the reserves. (Editor’s note: Medina deleted this Instagram post after this article was published, but a screenshot is here.)

Medina also explained why he joined the US Marine Corps: “I wanted to liberate Venezuela. When I was a kid, and when I saw Saddam Hussein fall, I also thought that Chávez [could fall too].” He expressed hope that today “an international coalition, like in Libya,” will overthrow the government of elected President Nicolás Maduro.

On his LinkedIn page, Medina posted photos of himself in his Marine Corps uniform, training soldiers in the Philippines, and serving as a military advisor in Taiwan.

On his social media accounts, Medina proudly identifies as a US Marine, using the number 0331, the shorthand for a Marine Corps Infantry machine gunner. On Instagram, Medina has posted dozens of photos from his time in the US military, shooting machine guns and wearing his uniform.

(Editor’s note: Medina deleted the Instagram post that was embedded below after this article was published, but here are screenshots.)

On Twitter, Medina published video of himself in uniform at a military exercise in Japan in 2015. (Editor’s note: Medina deleted this tweet after this article was published, but it is archived here.)

The Grayzone contacted the US Marine Corps and asked if it would comment on Medina sending peace activists a death threat.

A major at Communication Strategy and Operations (CommStrat) replied writing, “In order to verify the status of Luis Medina, we need the last four of his social security and or his date of birth. I apologize for the inconvenience.”

Another major, also of CommStrat, followed up saying, “We cannot provide a service verification without one of these personal identification data points.”

Working for Guaidó on Colombia-Venezuela border
On LinkedIn, Medina also says he was a volunteer for the US government’s soft power arm the United States Agency for International Development (USAID), through which Washington funds regime-change operations and opposition groups across the planet. (Although USAID told The Grayzone that Medina had no official relationship with the organization.)

Medina claims he volunteered for USAID’s Office of US Foreign Disaster Assistance (OFDA) from February to April 2019, in Cúcuta, a city on Colombia’s border with Venezuela. During these dates in Cúcuta, USAID was overseeing a coup attempt against the government of President Maduro.

On February 23, the Donald Trump administration tried to send supposed “humanitarian aid” from USAID over the Francisco de Paula Santander International Bridge. International aid organizations, including the United Nations and International Red Cross, condemned the US government for “politicizing” aid, in what was clearly a thinly disguised regime-change operation to install Washington-appointed “interim president” Juan Guaidó.

On LinkedIn, Medina posted a photo of himself on the bridge in Cúcuta wearing a vest from the group “Coalition Aid and Freedom Venezuela.” This was a US-allied Venezuelan front group of pro-opposition volunteers who served as shock troops for the coup attempt. The Grayzone reached out to USAID, asking whether Medina had been officially working with the organization, and further inquiring about its relationship with Coalition Aid and Freedom Venezuela.

A spokesperson at the Office of USAID Public Relations said “USAID did not employ or contract volunteers in Cucuta, and Mr. Medina has never been employed or affiliated with USAID.”

The spokesperson also told The Grayzone via email that “Coalition Aid and Freedom Venezuela is a group of volunteers organized by Interim President Guaido’s humanitarian team to support their efforts to deliver aid to Venezuela,” adding that “USAID has not funded this organization.”

Luis Medina appears to be exaggerating on his LinkedIn profile when he implies he had an official working relationship with USAID. But what is clear is that Medina was on the Santander bridge during the February 23 aid stunt. And his vest indicates that he was working for US-backed Venezuelan coup leader Juan Guaidó when he was there.

The Venezuelan news outlet Últimas Noticias published video on YouTube of Medina on the bridge with other violent opposition activists. In the footage, which Medina filmed on his cellphone, he issued a message to Donald Trump in English: “President Trump, where are you? Help me, help me save my people.”

“I’m an American citizen,” he declared.

Medina cheered on camera as his violent accomplices threw molotov cocktails towards Venezuelan riot police on the other side of the border. (The US government and corporate media outlets initially falsely claimed that President Maduro ordered the USAID convoy to be burned, but The New York Times later admitted that these molotov cocktails thrown by the opposition are what set it on fire — confirming what The Grayzone correctly reported at the time.)

Campaigning for a hard-right Republican
Before sending a death threat to peace activists, Luis Medina interned for the 2018 congressional campaign of California Republican Sean Flynn. Medina described himself on LinkedIn as a member of Flynn’s field staff from June to November.

In 2018, Flynn posted a photo on his campaign’s Instagram account identifying Medina as an intern. Flynn noted that Medina was born in Venezuela but left at age 13.

Since leaving active duty in the US military in 2015, Medina has worked as a security officer at California security firms. He also studied at Chaffey College and California Baptist University.

On Twitter, Medina has discussed plans to raise money for a “Patriot Army.” He posted a video of an opposition terrorist bombing of Venezuelan state security forces in 2017 and said, “Imagine what we could do if they give us money for a Patriot Army.”

On March 1, Medina published photos from Colombia with the text, “The solution is Option A, intervention, or Option B, Patriot Army,” along with a hashtag meaning “insurgency team Venezuela.” (Editor’s note: Medina deleted this tweet after this article was published, but it is archived here.)

Huge fan of Donald Trump
Luis Medina has made it very clear that he is a big admirer of far-right US President Donald Trump. He often tweets the hashtags #latinosfortrump #venezuelansfortrump, and has called on Trump to “build the wall” with Mexico.

Medina exhibits the characteristics of many young men on the alt-right, posting anti–Muslim comments, calling liberals “soy boys,” and telling youth activist David Hogg “You are a cancer.”

On Instagram, Medina published photos of himself wearing a “Make America Great Again” beanie, along with a Donald Trump-style Christmas sweater. Editor’s note (May 21, 2019): This article was updated after publication with further information about Luis Medina and his social media accounts.