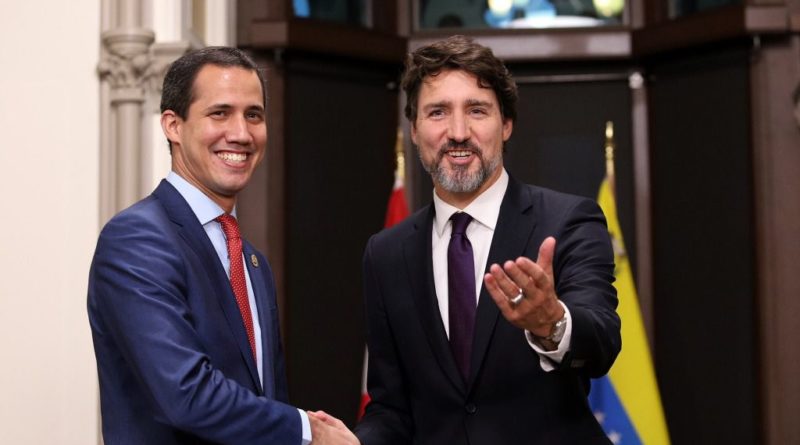 Fortunately, Canada is not a country that has suffered continuous threats of coup d’etats as Venezuela has these last 21 years.

Be that as it may, as a matter of clarification and discernment, let us imagine the following: suppose a powerful foreign power – let’s call it Statesland – intent on taking over Canada, say to possess the Arctic or the oil sands and turn back two decades of progressive change, offered $15 million to anyone who would deliver to them the Canadian Prime Minister who had adamantly defended Canadian sovereignty.

Suppose a political enemy of the Prime Minister, lets call him Mr. Juan, knowing he cannot defeat him in the polls, made a contract with a military entrepreneur, let’s call him Rambo, a former US Green Beret, to help him gain power. Imagine that this signed and sealed contract included detailed provisions for: assassinations, kidnapping, “subduing” the population, and taking over the armed forces and institutions. In addition to the $15m reward from Statesland, according to the contract, Mr. Juan would give Rambo and his henchmen $200m for overthrowing the Prime Minister and the government.

With the contract in hand, Rambo obtains logistical support from a neighbouring country where the men were trained – lets call that country Columbine- and help from the local narco traffic lord – lets call him Pablo Escobar II.

The plan is for Rambo and his mercenaries to arrive by boat at the Ottawa riverside, take possession of stored weapons and machine gun fitted vehicles, proceed to the Prime Minister’s home, overcoming any armed defence, and take him and his wife prisoner. Having also taken control of the Ottawa airport, they are to deliver the Prime Minister, his wife and any other politicians grabbed along with them, to Statesland and claim their reward. Then, taking over Parliament by force, Mr. Juan, the PM’s political enemy, would declare himself the new prime minister and saviour of Canada.

Ridiculous, you say? In Canada, yes. But in essence this is what has just been attempted in Venezuela, motive, contract, plan and all. Juan Guaidó, an obscure second-rate deputy, stood on a city street in 2019, and declared himself the new president of Venezuela with not one splinter of a legal leg to stand on but with full support of the CIA that trained him.

It is true that some Western countries have followed the USA in “recognizing” Guaidó as president of Venezuela. However, the fact is that Nicolás Maduro is fully recognized by the UN and 120 of its nations, as the legitimate, duly elected President of Venezuela. If in doubt ask any Venezuelan on the street, any soldier, any housewife, even the majority of his political opponents, who is the president.

Guaidó is unwilling to stand for election knowing he cannot get the votes. Unable to gain any real following among the Venezuelan Armed Forces, failing to overthrow the government with a series of violent operations with paramilitary thugs, Juan Guaidó has been successful only in deluding President Trump and his allies with tall tales of his popularity among the people and the army, while all the evidence says otherwise. Even his own party has disowned him.

Guaidó with ample funds from assets the USA stole from Venezuela, but no shame, contracted out a coup d’etat to mercenary terrorists. They were trained in three paramilitary camps in Riohacha, Colombia right next to the Venezuelan border, by two USA mercenaries, former Green Berets and with ties to a long time Trump bodyguard. With full knowledge and encouragement of President Ivan Duque of Colombia they trained up to 300 Venezuelan soldiers who had deserted in February of 2019.

Trump and his entourage of yes-men, are desperate to possess Venezuela’s immense oil and gold deposits. Furthermore, its socialist, Chavista, Bolivarian Revolution is anathema to the capitalist hegemon that continues to insist that the whole of Latin America is their backyard. How dare Venezuela think that they can choose their own mode of government? How dare that government implement its own domestic and foreign policies, not those of the USA?

The Canadian Federal government has not expressed a word of concern or sympathy for this violent terrorist attack on Venezuela. It has not condemned this ignominy to the Venezuelan Constitution, political institutions, its legitimate president, and most of all, to the people of Venezuela.

The plot was designed and paid for by Canada’s own preferred political puppet, Juan Guaidó, who is now a political corpse and undoubtedly, the most despised man in Venezuela. There is plentiful evidence of Guaidó’s treason: the signed and witnessed contract and the statements for all to see on the Internet of the two captured US ex-Green Beret mercenaries, (one of whom was born in Canada).

The Venezuelan Armed Forces were quite prepared for the attack on the dawn of Sunday May 3rd. They intercepted the mercenaries who were traveling in speedboats as they attempted to land on the northern coast of Venezuela at Macuto, next to the international airport. One of the boats was sunk and eight terrorists killed, and two were captured.

On the next day, Monday May 4th, a second boat full of mercenaries, fleeing the battle tried to land in the remote, humble, fishing village of Chuao. They were met by the patriotic fishermen and fisherwomen who – with only one rifle and a few pistols – quickly captured the armed mercenaries and tied them up with rope until the local police could arrive. Their indignation was great when the mercenaries offered them dollars to free them. “But why”, their captives asked, “if you only earn pennies and we can give you dollars?” Mercenaries only understand money, not so the villagers who live by other values. The village has now become the symbol of the courage and steadfastness of the Venezuelan people.

It has come to this in Canada. Canada’s once independent, sovereign, foreign Canadian policy has been compromised by the mistaken desire to placate a floundering, unprincipled, befuddled, vain, overbearing and incompetent president in United States. This outrage against Venezuela – a friendly, neighbouring country in our Hemisphere – was ignited by Donald Trump ‘s Wild West offering of money for the head of Nicolas Maduro, and his support for the bogus Juan Guaidó.

The US has tried to overthrow Venezuela’s government since the first coup d’etat in 2002, with paramilitary raids and street violence. But their most lethal and successful weapon has been the illegal economic blockade that is restricting food and other imports and denying medicines to the Venezuelan population. There is nothing “covert” about it. Trump, Bolton, Abrams, Pompeo and Senator Lindsey Graham have all openly stated they wish to oust President Maduro with military intervention if necessary, as if they had any right to do so.

Canada has fallen in step with these nefarious plots by leading the Lima Group – a group of the most corrupt and violent governments in the region – to circumvent the United Nations in a semblance of “multinational” cooperation, and whose main objective is to oust President Maduro, as if they had any right to do so.

The Canadian Government has yet to issue a single word of censure about this attack on Venezuela’s institutions and president. Not one word of concern or sympathy. Not one word of repudiation of the Guaidó whom they embraced and encouraged in the destabilization of Venezuela.

Canadians have a right to expect more honour from our government.

What are you going to do about it Primer Minister Trudeau?