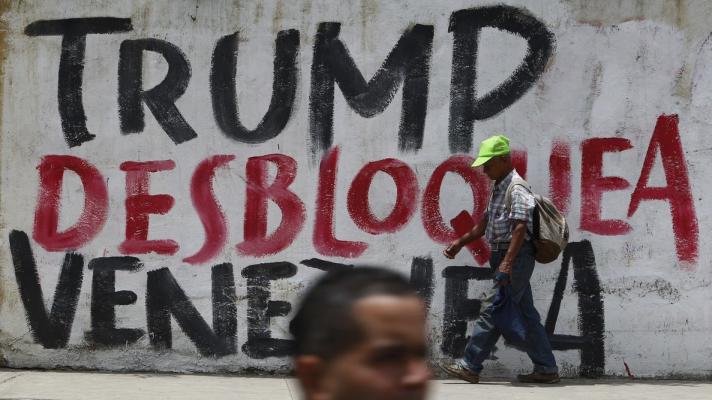 In a report typical of the US Department of State’s narrative against Venezuela, but presented through detailed explanations, Canada-based Reuters news agency referred to a set of practices that Petróleos de Venezuela, SA (PDVSA) would be executing to overcome the commercial obstacles that have been imposed on it by US blockade and sanctions.

The publication details various actions that Venezuela would be undertaking jointly with Iran and Russia, and with a group of new allied companies, to place shipments of crude oil in the international market and thus overcome the coercive and unilateral measures that have been executed by the United States and others “allies” against millions of Venezuelans.

Venezuela, which had a crude oil production of 2 million barrels per day in 2017, has suffered a dramatic drop in its exports, and in the absence of customers the country has been forced to stop pumping from its wells, dropping production to an average of less than 400,000 barrels per day according to OPEC figures reported in mid-2020.

The Venezuelan economy, highly dependent on foreign currency, is also particularly dependent on oil activity. More than 90% of the foreign exchange that historically enters the country has been propped up by the Venezuelan State’s oil exports, driving the country’s authorities and PDVSA to resort to exceptional mechanisms to overcome suffocation.

LEARNING FROM THE IRANIAN EXPERIENCE
According to Reuters, Venezuela is being advised by the Iranians, who have accumulated relevant levels of expertise to circumvent the commercial boycotts that have been applied against the Persian nation intermittently in recent decades.

The commercial oil superstructure, strongly subject to regulations and practices modulated mainly from consumer countries, has been consolidated on the basis of transparency in company registration mechanisms, certification of commercial activity, dispatch protocols and a set of commercial navigation regulations for the transfer of crude oil.

All these items have been progressively modified or omitted in Iran with practices consolidated over the years, allowing it to sustain some modest oil exports and bypass the “maximum pressure” measures of Washington.

An Iranian oil official consulted by Reuters, in the aforementioned report, admitted an exchange of information between the two countries. “We have meetings and we discuss a variety of issues, including trade and ways to circumvent US sanctions,” he said.

According to Reuters , PDVSA is now implementing some of these practices and relying on the discrete, secondary infrastructure that the Iranians, with the support of the Russians, have built to bypass the blockades.

Some twenty-one companies, many of them not involved or without registration in the oil activity, would be the new PDVSA companies to relaunch their exports.

PDVSA would be disrupting old mechanisms in its internal regulations to sell crude to intermediaries. Previously, the state company only sent dispatches to those who were directly involved in refining activities and had more than two years cataloged and certified as commercial operators in the industry.

Venezuela would be relying on fleets of ships that make name changes and flag changes to vessels. Reuters refers to the case of the Otoman vessel, allegedly stationed off Venezuelan coast. Said vessel does not have any registration in the maritime databases and has an identification number with the International Maritime Organization that had been assigned to a vessel called Rubyni.

However, “Rubyni was reported as out of service two years ago, the databases record. Satellite images provided by TankerTrackers.com, an independent vessel monitoring service, show the ship was scrapped off the coast of Bangladesh in 2018,” reports Reuters.

PDVSA would be commercially triangulating with Russia, just as the Iranians are doing, transferring small crude exports that, once they are charted, would find the Asian market as their final destination. The actions of the Americans against Rosneft would be conducive to intermediation and triangulation given the impossibility of regular commercial activities imposed by the blockade. Let us remember that Rosneft withdrew from Venezuela in March of this year (due to US sanctions) but a commercial company under the jurisdiction of the Kremlin has take over activities in the country.

The ships that participate with PDVSA in these operations, once loaded from Venezuela, turn off their GPS and disappear from satellite services, just as the Iranian vessels that have recently brought gasoline to Venezuela have done.

These vessels on the high seas disappear from the satellites and then reappear in other latitudes, and on several occasions with changes in number, name and registration.

“Traveling with the transmitter off means that ships can be renamed while the signal is off and that information is only shared when the signal is turned on again. This usually happens weeks or even months after they have left Venezuelan waters,” says Reuters .

The agency refers to the cases of two vessels that would be operating for Venezuela: the Lion 1 and the Vinland. The Lion 1’s transmitter has been offline since late 2018, according to energy consulting firm Refinitv Eikon, while the Vinland vessel, according to Greece-based Dido Shipping Company SA, “was been dismantled in Turkey this past June,” the agency quotes.

According to Reuters , these maneuvers would be driving a jump in exports and therefore in the production of Venezuelan crude, which, according to the British media, would’ve reached some 700,000 barrels per day last September.

THE EXCEPTIONAL AUDACITY REQUIRED TO CIRCUMVENT THE BLOCKADES
In February of this year, Venezuelan authorities detained two managers of the state-owned PDVSA belonging to the Directorate of Commerce and Supply, in charge of the oil company’s import and export commercial operations. These officials were accused by the Venezuelan Prosecutor’s Office of having facilitated the leakage of “strategic information” on the operations and commercial allies of the state company.

Then in March, US authorities boasted of announcing a set of “sanctions” against ships and freight companies for oil activity, for bringing gasoline to Venezuela or transferring Venezuelan crude, including TNK Trading International, a subsidiary of Russia’s Rosneft, unleashing in that month a sharp increase of fuel shortages in the Caribbean nation that remains until today. The measures against boats were extended in the following months.

The US news agency AP has reported that the commercial asphyxiation measures against Venezuela have resulted in various actions against more than fifty vessels related to Venezuelan activity, especially those linked to the transfer of fuel and additives for the manufacture of gasoline in Venezuela.

Obviously, for PDVSA, the US blockade—that has deepened during 2020—has imposed a change of rules in its traditional commercial activities, which had been built according to international regulations and protocols.

Now the country seems to be redesigning its chain of commercial processes within singular parameters, responding to opportunities as possible.

Venezuela has recently launched the legal instrument called the Anti-Blockade Law, a legal framework that emphasizes selectively “not applying” regulations and sections of some essential laws, according to discretionary parameters of State policy originating from circumstances imposed by the blockade.

In oil matters, this law has an emphasis on some mechanisms provided for in the Organic Hydrocarbons Law, to establish commercial alliances without institutional and legal restrictions and, in addition, establish a reserve in access to information on the operations that PDVSA will carry out henceforth, with the purpose of protecting the allies and the state itself from the actions of the Americans.

It seems clear that in the face of the piracy and commercial poaching practices of the US oil blockade, Venezuela is acting correspondingly, adjusting its commercial activity and protecting its legal basis, in order to resist the attacks of the boycott.

Venezuela would be applying practices that other countries like Iran have taken years to develop. Obviously, the Anti-Blockade Law becomes at this point a clear sign of an understanding and adjustment by the Venezuelan authorities to the particulars of the new reality imposed by the blockades. In this way Venezuela benefits from strategies that several governments of blocked countries took years or decades to interpret, develop and implement in their actions and in their laws.

Featured image: Street pints against the US blockade of Venezuela (Photo: AP)