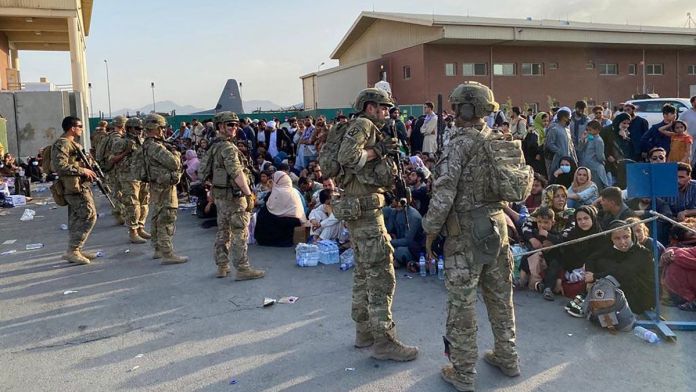 As a result of the crisis in Afghanistan, the Colombian government announced that it will grant temporary humanitarian residence permits to about 4,000 people from the Central Asian nation, as part of a humanitarian aid project financed by the United States.

The costs of this operation, which the Colombian President describes as an “international humanitarian alliance,” will be assumed by the US agency USAID, through which numerous disruptive actions against Venezuela have been financed. Behind this “humanitarian financing” there are some elements that could be aimed at destabilizing the Colombian-Venezuelan border.

More money for Colombia
According to the United Nations, Colombia is among the countries with the highest internally displaced population in the world, above all in the border regions with Venezuela, on the Pacific coast, and in the northern department of Santander, territories where violent internal confrontations prevail for control of transport and distribution routes for Colombian drug trafficking.

The Registro Único de Víctimas [Registry of Victims] and the Global Internal Displacement Monitoring Center determined that between 1985 to 2020 there have been almost 8.1 million internally displaced persons within Colombia. This population is not mentioned in the requests for humanitarian aid by the Colombian government, whose objective has been to provide supposed services for Venezuelan migrants [who, incidentally, frequently complain that they never receive any such aid], and now to Afghan civilian collaborators and refugees.

Among those who will arrive in Colombia from Afghanistan are “civilians cooperating with the government and army of the United States or NATO”—that is, intelligence or military assets under the orders of the White House during its twenty-year invasion and occupation. Many of them will be hired by private and military security [aka mercenary] companies that operate openly in the South American nation.

In his remarks, President Biden reiterated that “President Duque is a great friend of the United States and we thank him for answering the call to provide humanitarian support to Afghan citizens who have worked to spread democracy and freedom.”

It is striking that the United States and NATO collaborators will remain in Colombia until the government of Washington “decides to authorize their entry into the US.”

This particular mode of bilateral support occurs in the midst of a new call for protests by Colombian social movements, whose leaders have been victims of a systematic genocide recognized by the United Nations, and who denounce the organization and financing of terrorist groups to act against Venezuela.

The large transnational industry of military and private security companies was active in Afghanistan during the years of the US invasion. Researchers maintain that although US regular soldiers are withdrawing, the US presence is not diminishing as a result of the outsourcing of the war.

It should be noted that the US invasion of Afghanistan was the longest war in US history and had a cost of approximately two billion dollars. As a result, Afghanistan is experiencing a permanent civil war, is the largest heroin producer in the world, and a center for methamphetamine production.

In the framework of the so-called privatization of the war, Colombia has become one of the main countries in which private military security companies operate. Colombian legislation favors the open operation of these transnational companies that also operate in Afghanistan, and that have been identified as being behind the attempted assassination of President Nicolás Maduro in Venezuela and the assassination of the President of Haiti, Jovenel Moïse.

Along with the business of private military companies comes drug trafficking. During the years of the US invasion, poppy producers in Afghanistan were strengthened by their partnership with powerful heroin cartels in the United States and Colombia. Studies by the Colombian Drug Observatory and the Ministry of Justice of that country recognize heroin use as an emerging reality in Colombia that must be addressed as a public health problem.

In July of this year, the United States announced an extra $400 million for countries that, according to them, help Venezuelan migrants. The United States is the largest humanitarian donor to the “regional crisis in Venezuela,” having provided more than $1.4 billion in humanitarian assistance since 2017, much of the resources allocated to the Colombian government. These years were marked by an increase in the training and organization of mercenaries engaged in the destabilization of the Venezuelan government, including failed incursions of the Colombian-Venezuelan border, and missions such as Operation Gideon at the cost of $200 million, as established in the contract signed by former deputy Guaidó.

To date, USAID has not openly specified the amount of this new humanitarian aid for Colombia to provide for Afghan refugees, nor the number of civilian collaborators serving the interests of the US government, army, or NATO, who will remain in Colombia until their acceptance as refugees in the United States—a process that could take years. Meanwhile, “humanitarian financing” is expected, which the US agency itself has been forced to acknowledge “barely reaches the hands of migrants,” and the Colombian government promotes an “international humanitarian alliance” that sets off alarm bells.

Featured image: US soldiers securing Kabul airport during the chaotic US withdraw from Afghanistan after 20 years of invasion. File photo.