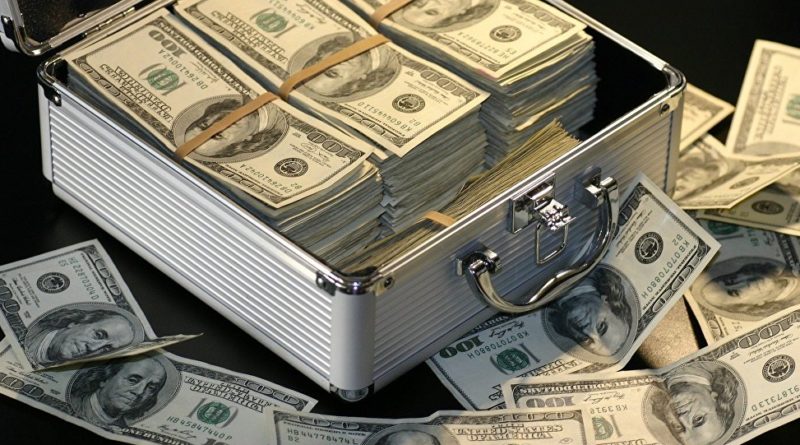 Since joining the Presidency of the Venezuelan National Assembly in January 2019, deputy Juan Guaidó has implemented a series of unsuccessful actions against the government of Nicolás Maduro, which has eroded his leadership.

Moreover, the frequent corruption scandals denounced by his own allies have provoked a wave of dissatisfaction within the Venezuelan opposing sector.

Deputies of the National Assembly now accuse Juan Guaidó of hiding the fate of funds sent by governments and foreign donors, because so far there has been no accounting.

Among the resources managed by Maduro’s main opponent is also the profit of two Venezuelan state-owned companies: Citgo, which is a subsidiary of Venezuelan oil company PDVSA in the United States, and Monomeros, a fertilizer company located in Colombia.

Following the economic blockade imposed against the Maduro government, these companies were seized by the US and Colombian governments.

With this, the industrial facilities were passed to the control of a team appointed by Juan Guaidó, recognized by these countries as the interim president of Venezuela.

In addition, the US government announced in February 2019 that it was currently allocating $ 20 million in humanitarian aid to Venezuela.

Canada had sent $ 40 million at the same time. The Venezuela Aid Live megashow held in Cúcuta on the Colombian border on February 23 (2019) raised another $ 2.5 million, and at that time Puerto Rican reggaeton singer Don Omar donated $ 1 million, which was delivered directly to the Guaidó team.

The United States government sent other resources that were not declared until December 2019, when the United States Agency for International Development (USAID), an agency of the US government, published this information on its web page.

According to the agency, in 2019, $ 158 million was allocated for humanitarian assistance in Venezuela. However, Juan Guaidó claims that he does not manage foreign funds as he said humanitarian aid would be administered by NGOs.

However, USAID itself states in the same document that it had other resources that were delivered directly to Juan Guaidó.

“USAID is providing more than $ 128 million to fund programs to support interim President Juan Guaidó and his government as they restore democratic governance and respond to citizens,” it said on its Spanish website .

RELATED CONTENT: Elliott Abrams: US Government Will Again Fund Guaidó and the “Free Press” in 2020 (Video)

Corroborating this information, the White House special envoy for Venezuelan affairs, Elliott Abrams, said last week in a press conference that Donald Trump’s government sent money to Juan Guaidó’s team for the maintenance of the National Assembly of Venezuela and to finance the support communication apparatus for Guaidó, which includes payments to journalists and media classified by him as the “free press”.

And the resources for 2020 are already guaranteed too. The US government announced in December 2019 that the US Congress has approved $ 400 million, which will go to humanitarian assistance in Venezuela and neighboring countries, which receive Venezuelan immigrants, without stipulating the allocation for each country.

Another $ 17 million were also approved for “democratic political actors and for Venezuelan civil society organizations”.

Although the Venezuelan opposition has received this amount of resources, many lawmakers have not even come close to this money.

Outraged by Congressman Juan Guaidó’s lack of transparency, more than 30 deputies rebelled and failed to support the opposing leader. That is what made possible the election of the new president of the National Assembly, Luis Parra, of the party Primero Justicia, the second largest party of the Venezuelan right.

Guaidó also claims that he was elected president of the Venezuelan Congress, with 100 votes, in a parallel National Assembly. However, among the 100 votes, at least 22 are from disqualified (alternate) deputies whose holders voted for Luis Parra.

Thus, 27 deputies who are out of the country were accounted for, investigated and accused of participating in crimes, and seven others disqualified by the Venezuelan court for electoral fraud and other crimes. On the list are two deputies from PSUV, party of Nicolás Maduro, who guarantee that they were not present in this illegal election.

“We ask the former president of the National Assembly, Juan Guaidó, to report on the current situation of Venezuelan public companies. Former Guaidó ambassador to Colombia, Humberto Calderon Berti, recently reported that Monomeros was virtually bankrupt, was being dismantled. This caught our attention and we have been criticizing it ever since,” said the current president of the National Assembly, Luis Parra, in an exclusive interview with the Diário do Centro do Mundo.

Former Guaidó “ambassador” in Colombia, Humberto Calderón Berti was fired after requesting an investigation with the Colombian Public Prosecutor for possible misappropriations by Guaidó staff members in the Colombian city of Cúcuta, on the Venezuelan border.

This came after right-wing media such as the Miami-based Panampost news site published documents proving misuse of humanitarian aid resources.

According to Berti, there were also problems in the state-owned company Monomeros. “Political parties got their hands on Monomeros and put unskilled and low-profile people into its leadership. There can be no public dispute or partisan distribution in public companies,” Berti said in a press conference last December.

One of the directors of Monomeros nominated by Guaidó is Jon Bilbao Boroja. He said in an interview that the company’s estimated profit for 2019 was $ 6 million in 2019.

However, at the end of the year the company did not publicly present its annual balance sheet. Monomers is the largest fertilizer company in Colombian territory, the market leader with over 70% share of fertilizer sales.

Between 2016 and 2018, the company’s annual profit was never below $ 300 million, according to data released by the Colombian Business Societies Superintendence.

In the US, Juan Guaidó’s top representative, designated as ambassador of his “interim government”, Carlos Vecchio, known in the Venezuelan political environment as a former executive of the US oil company Exxon Mobil, has been under investigation since June by the US Justice for the alleged embezzlement of US $ 70 million from the Venezuelan state company Citgo.

For Luis Parra, the corruption and dismantling of these companies compromises their true role. “Today, we are experiencing a major crisis in Venezuela and it is these public companies that should provide the resources to serve the population,” he says.

Along the same lines, the opposing deputy José Brito, of the opposition party Justice First, highlights the lack of transparency of his former political ally (Guaido).

“Where are the dollars USAID handed over to Venezuela? Juan Guaidó says these resources are run by NGOs. He would have to review who is running these organizations. It would have to be a serious investigation, because there are serious suspicions that those who run all these NGOs, who have received the resources for humanitarian aid, are people very close to Guaidó,” says Brito, in an interview with the Diário do Centro do Mundo.

Since August, Venezuelan political consultant Pedro Pedrosa, an anti-Chavista, had been denouncing what he called “the profitable business of NGOs” in Venezuela.

“Most of these NGOs are satellites of political parties. In Venezuela, it has become a very lucrative business to be opposed to the government.”

Pedrosa also states that much of the resources used by the opposition go to NGOs through international cooperation agencies, such as the USAID.

Amid the dispute over the leadership of the Venezuelan opposing sector, Congressman Juan Guaidó also accuses Parra and Brito of corruption. Brito defends himself.

“How curious that we were the ones who requested an investigation against Guaidó’s corruption and we ended up being investigated by his allies. We denounce the Cúcuta case, in which they stole an important amount of dollars and even the donation of musician Don Omar, worth 1 million,” says the congressman.

Brito also says he was a victim of persecution. “It is they (Guaidó and his allies) who administer the resources, but we are accused of involvement in acts of corruption. I do not manage public resources. So these accusations are politically motivated because they knew what was going to happen on January 5 (when Guaidó was defeated in the election of the board of the National Assembly).”

Revolt of the regions against the leaders of the capital

The internal divisions of the opposition Venezuela, which caused a fracture in the National Assembly last week, is also a reflection of a dispute between the capital and the provinces.

To better understand, it is necessary to go back in time. The National Assembly had its powers suspended by the Supreme Court of Justice in 2015 for failing to comply with court orders. This led the court to also suspend the salaries of the 167 deputies in January 2016. However, the parliament continued working, but can not legislate, only hold political debates.

Therefore, being a parliamentarian in Venezuela has become a voluntary activity, where most politicians have their professions apart from political activity. But the opposing faction receives funding from the United States government, according to White House special envoy for Venezuelan affairs, Elliott Abrams.

However, some MPs claim that these resources did not reach the opposing parliamentarians, who represented about two-thirds of Congress, until three months ago.

In addition, the deputies from the interior of the country were harmed, as the social conditions of these regions are more complex in times of crisis and international economic blockade and claimed they were not receiving assistance. That would have been one of the detonators of the withdrawal of support for Deputy Juan Guaidó.

“We in the provinces are suffering alongside the people. That is why we rose against Guaidó,” said MP Brito. The current president of the National Assembly confirms that the revolt against Guaidó started from the interior of the country. “From the provinces, local leaders have met to agree on a clear proposal for the country that could depolarize Congress so that there will be no confrontation,” says Parra.

After all this, the United States government announced sanctions on Monday (13/01) against the new board of the National Assembly, among those sanctioned is Luis Parra and seven other deputies.

“I have no bank account or assets in the US and there is nothing that matters to me but the people of Venezuela. We ask for respect from governments, just as we sometimes ask for help,” said Parra.

This Tuesday (01/14) there was a session in the National Assembly. Also, Socialist PSUV vice-president Diosdado Cabello called a march in central Caracas to focus on the defense of peace in Venezuela and the end of the confrontation between the opposing sectors that are vying for the National Congress.

Representative Juan Guaidó, who had summoned his supporters for a march that would accompany him to the Legislative Palace, changed the plans and his session will be Wednesday. Although the government of Nicolás Maduro does not recognize Guaido as president of the National Assembly, he is free to enter into the Legislative Palace abd to hold his event, which will only be a symbolic session.

On Tuesday of last week, Guaidó and 38 other deputies held one of these symbolic sessions in the plenary of the National Assembly, after the official session had already ended. The scene of the two legislative sessions is to be repeated this week and Venezuela is thus accommodating its internal political conflicts.

US (taxpayer) money sent to the Venezuelan opposition in 2019: