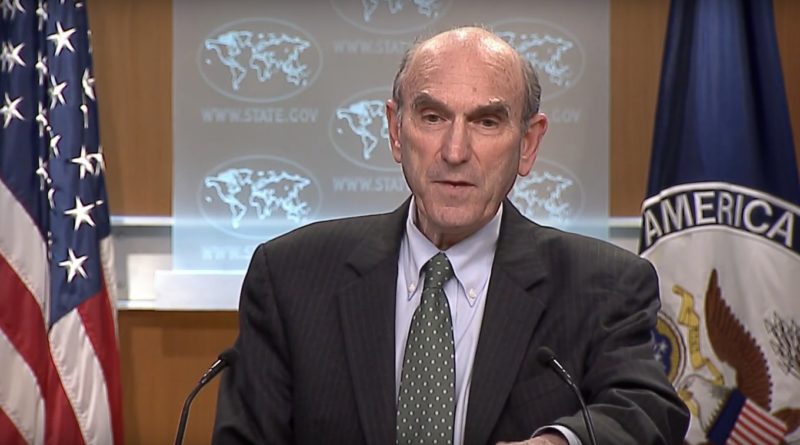 The special representative of the US government for Venezuela, Elliott Abrams, said that in 2020 the Trump administration will provide funds for the National Assembly that is -according to them- directed by deputy Juan Guaidó, as well as for news outlets that the United States calls “free press” and for “the forces of freedom” of the Venezuelan opposition. This was reported in a press conference on January 6.

Questioned by a journalist about the “aid” that the US government would give to the “forces of freedom,” Abrams recalled that the US Congress has approved “a good amount of money to help the democratic opposition in Venezuela.” He noted that “we are thinking of ways to use these funds, and try to make other countries also give political, diplomatic and financial support to the forces of freedom in Venezuela.”

“We have some funds that we can use for the National Assembly, so there are a variety of things,” the US spokesperson admitted.

Abrams did not want to answer the journalist’s questions about the amount of money that would be provided to the Venezuelan opposition, but said that “we have an agreement with the ‘legitimate government’ of Venezuela, a development agreement, and we are authorized to do things to help, for example, the free press of Venezuela, so that they continue transmitting and continue publishing.”

He noted that the funds are being provided through USAID (United States Agency for International Development) and through the Office of Democracy and Human Rights of the State Department.

The spokesman for the US government also announced that they will increase personal and economic sanctions to “put even more pressure on the regime.”

Earlier in his press conference, Abrams congratulated Juan Guaidó for -according to them- having been re-elected president of the National Assembly on January 5, in a controversial session held at the headquarters of the opposition newspaper El Nacional, in which disqualified deputies are reported to have participated, un-sworn deputies and deputies who voted remotely, using a modification to the internal regulations of order and debates that was annulled by the Supreme Court of Justice for violating the Constitution.

On January 5, Luis Parra was elected as president of the board in the National Assembly, in a session that Guaidó did not admit as valid because a group of deputies who were disqualified or were un-sworn alternates not allowed to enter the Federal Legislative Palace. Parra, opposition deputy of the Justice First party, was elected on January 5 as president of the Venezuelan Parliament with the votes of the opposition block “Rebellion of the Regions” (formed by deputies of opposition parties who broke with Guaidó), as well as by the Bloque de la Patria, formed by the parties that support the Venezuelan President, Nicolás Maduro.

Criticism from within the opposition
The journalist Patricia Poleo, hard attacker of the government of Maduro but also critic of Guaidó, admitted in an interview with Jaime Bayly on January 6 in Miami, that among the opposition deputies “there is a great resentment” due to the the way Juan Guaidó has embezzled the funds provided in 2019 by the United States government.

“By the way, today Elliott Abrams made some statements saying that the United States has given money for the National Assembly, for its operation. Where is that money?” asked Poleo on the “Bayly Show” program, which is broadcast on Mega TV. She continued, “Some deputies received money. Other deputies were resentful because some were being given $500 a week and they were only reciving $100. That struggle was on the table for the last few months.

Poleo and Bayly recognized that Guaidó has “a budget, a petty cash”, which according to the program’s leader, is around 90 or 100 million dollars.

During the show Poleo also highlighted that anti-Chavismo forces will lose the upcoming parliamentary elections in Venezuela and that Guaido chose not to enter the parliament (because there are videos showing him refusing to enter) and he did that because he knew he didn’t have enough votes.