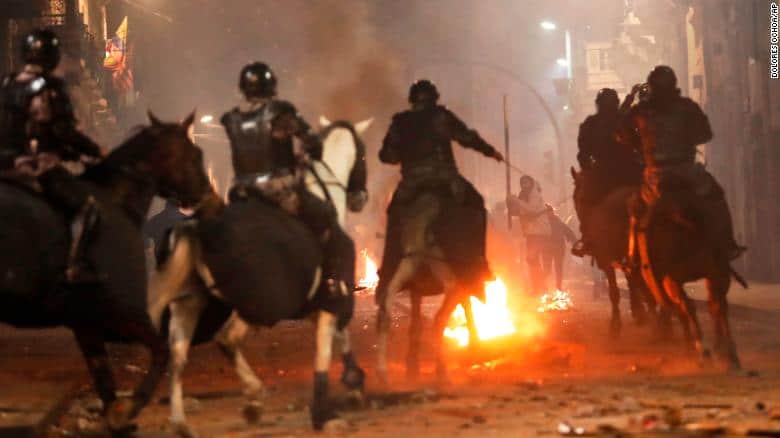 Throughout Latin America and the Caribbean, people are rising up against right-wing, US-backed governments and their neoliberal austerity policies.

Currently in Chile, the government of billionaire Sebastian Piñera has deployed the army to crush nationwide demonstrations against inequality sparked by a subway fare hike.

In Ecuador, indigenous peoples, workers and students recently brought the country to a standstill during 11 days of protests against the gutting of fuel subsidies by President Lenin Moreno as part of an IMF austerity package.

One might expect these popular rebellions to receive unreservedly sympathetic coverage from international media that claim to be on the side of democracy and the common people. On the contrary, corporate journalists frequently describe these uprisings as dangerous alterations of “law and order,” laden with “violence,” “chaos” and “unrest.”

This portrait contrasts remarkably with coverage of anti-government protests in Venezuela, where generally the only violence highlighted is that allegedly perpetrated by the state. In the eyes of Western elite opinion, Venezuela’s middle-class opposition have long been leaders of a legitimate popular protest against an authoritarian, anti-American regime. Poor people rebelling against repressive US client states are considered an unacceptable deviation from this script. 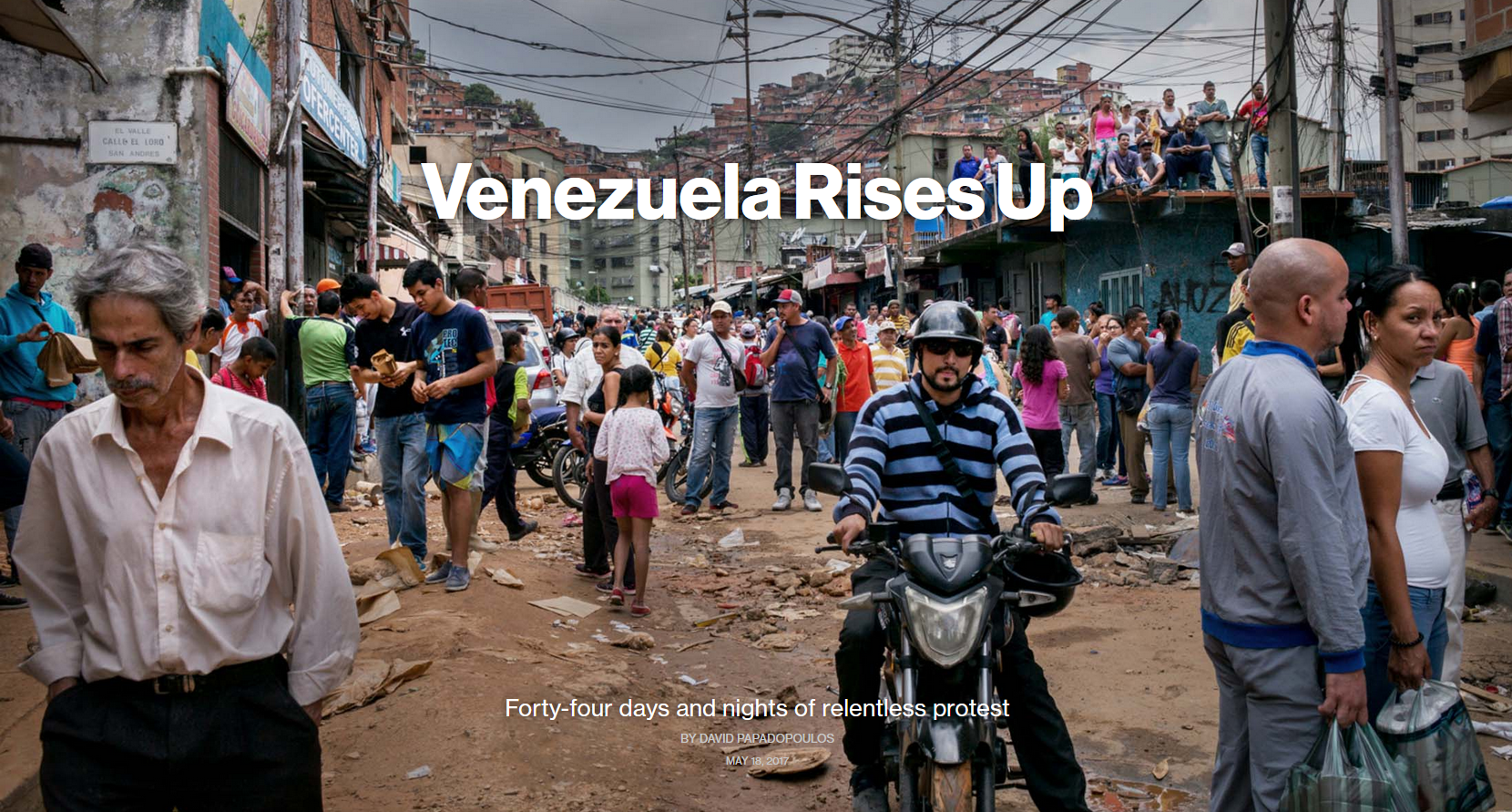 Corporate journalists have never been able to contain their enthusiasm for the right-wing Venezuelan opposition’s repeated coup attempts, which are regularly cast as a “pro-democracy” movement (FAIR.org, 5/10/19).

In 2017, Venezuela’s opposition led four months of violent, insurrectionary protests demanding early presidential elections, resulting in over 125 dead,  including protesters, government supporters and bystanders. It was the opposition’s fifth major effort to oust the government by force since 2002.

Despite the demonstrations featuring attacks on journalists, lynchings and assassinations of government supporters, they were depicted as a “uprising” against “authoritarianism” (New York  Times, 6/22/17), a “rebellion” in the face of “the government’s crackdown” (Bloomberg, 5/18/17) and a David-like movement of “young firebrands” facing down a sinister regime (Guardian, 5/25/17). Reporters frequently attributed the mounting death toll to state security forces (France 24, 7/21/17; Newsweek, 6/20/17; Washington Post, 6/3/17), while generally ignoring opposition political violence reported to be responsible for over 30 deaths.

The pattern was repeated in January, when deadly clashes broke out across the country  in the days before and after opposition leader Juan Guaidó declared himself “interim president” with the US’s encouragement. Corporate outlets described the events as a “violent crackdown” (Independent, 1/24/19), with security forces “spreading terror…to target critics” (Reuters, 2/3/19) and “soldiers and paramilitary gunmen…hunting opposition activists” (Miami Herald, 1/27/19). International journalists based their accounts largely on pro-opposition sources, suppressing inconvenient details that complicated their Manichean narrative, such as the fact that some 38% of protests were violent and at least 28% featured armed confrontations with authorities.

Unlike in Chile and Ecuador, corporate outlets have consistently vilified Venezuelan President Nicolás Maduro—who won 6.2 million votes, or 31% of the electorate last year—as an “authoritarian” (FAIR.org, 4/11/19, 8/5/19) or a “dictator” (FAIR.org, 4/11/19), justifying the latest coup effort.

In recent days, Chileans have taken to the streets in mass demonstrations against the Piñera administration, following a further increase in Santiago’s exorbitant subway fare.

Beginning as high school student–led protests, the movement has escalated into a full-scale rebellion against the savagely unequal neoliberal order, prompting the government to militarize the streets and impose a curfew for the first time since the Western-backed Pinochet dictatorship (1973–90).

Revealingly, no major outlets have described the government’s brutal repression as a “crackdown,” nor called into question the legitimacy of Piñera, who was elected in 2017 with the backing of 26% of registered voters.

It’s true that international journalists are beginning to reference allegations of human rights violations reported by Chile’s National Human Rights Institute, including, as of October 23, 173 people shot and 18 dead, among them at least five presumably at the hands of authorities.

However, the victims of state violence in Chile have not received anywhere near the amount of attention international outlets have dedicated to protester deaths in Venezuela, where the dead have been movingly profiled (New York Times, 6/10/17; BBC, 5/14/17)—provided they were not lynched by the opposition.

In two emblematic cases, Manuel Rebolledo, 23, died on October 21 after being run over by a navy vehicle near Concepción, while Ecuadorian national Romario Veloz, 26, was shot dead the day before at a protest in La Serena. Neither men have been mentioned by name in Western press reports.

It would appear that the only worthy victims, in the eyes of US corporate journalists, are those that have propaganda value from the standpoint of Western foreign policy interests. Reporters spontaneously empathize with neoliberal technocrats like Piñera, even as they occasionally chide them for “excesses.”

“Mr. Piñera said that he is mindful of the broader grievances that fueled the unrest… But he seemed to have difficulty coming to grips with the real source of the population’s frustrations,” the New York Times (10/21/19) sympathetically observed, before going on to note that the president has declared “war” against his own people.

The paper of record suggested that Chileans might find the imposition of martial law “jarring,” given that “the military had killed and tortured thousands of people just decades ago in the name of restoring order.” But despite the article being headlined “What You Need to Know About the Unrest in Chile,” the Times did not find it relevant to mention anywhere that state security forces were currently maiming and killing demonstrators in the streets, and allegedly torturing detainees.

No Western newspapers have published scathing op-eds calling Piñera a “dictator” and demanding their government take action to “restore democracy,” as they have done regularly in the case of Venezuela (FAIR.org, 4/11/19). Rather, they counsel the billionaire president to address “inequality,” barring any reference to what is increasingly coming to resemble state terror (New York Times, 10/22/19; Guardian, 10/23/19; Bloomberg, 10/23/19).

Corporate journalists continue  to whitewash Piñera, describing him as “center-right” (Guardian, 10/21/19; CNBC, 10/19/19; Reuters, 10/21/19) and concealing his personal ties to murderous dictator Augusto Pinochet and those of his top cabinet members.

President Moreno has yet to be labeled by the international media as “authoritarian,” despite ordering soldiers to repress demonstrators in the streets, imposing a curfew, suspending basic civil liberties and arresting rival politicians.

Since betraying his campaign promise to continue his predecessor Rafael Correa’s left-wing policies. and embracing the oligarchy he ran against, Moreno has become the darling of Western elite opinion (FAIR.org, 2/4/18).

As Joe Emersberger has recently exposed for FAIR (10/23/19), Western journalists’ favorite lie is that Moreno “inherited a debt crisis that ballooned as his predecessor and one-time mentor, former President Rafael Correa, took out loans for a major dam, highways, schools, clinics and other projects” (New York Times, 10/8/19). In fact, the country’s debt-to-GDP level remains low, though it has increased slightly under Moreno, due not to public works but to his pro-elite policies.

Corporate outlets have for the most part admitted that Moreno has presented no evidence to back his ludicrous claims of Correa and Maduro supporters orchestrating the protests; nonetheless, they have, with few exceptions (DW, 10/14/19; Reuters, 10/12/19), shamefully ignored Moreno’s draconian persecution of Correaist politicians (including elected representatives), which he justifies on the basis of the very same conspiracy theory. This coverage contrasts sharply with the red carpet treatment regularly provided to Venezuela’s US-friendly opposition politicians, regardless of how many coups they perpetrate (Reuters, 4/30/19; LA Times, 4/30/19; Guardian, 2/6/19).

It is not coincidental that Western journalists stand aghast at the violence of the excluded and exploited in Chile and Ecuador, while rationalizing that spearheaded by Washington-backed opposition elites in Venezuela.

This bias has nothing to do with any actual amount of looting or arson. Rather, it is the eruption of the racialized poor into polite bourgeois society’s technocratic body politic that is viscerally violent to local neocolonial elites and their Western professional-class backers.

Ecuador’s protests are the latest in a long line of anti-neoliberal uprisings, which brought down three presidents between 1997 and 2005.

The rebellion exploding in Chile is the largest in over a generation, evidencing the terminal legitimacy crisis of the “low-intensity democracy” crafted by Pinochet to maintain the neoliberal model imposed at gunpoint. The Chilean uprising has genuinely terrified elites, leading  the right-wing president to wage war on his own people. At stake is not just the stability of a key Western ally, but more crucially, neoliberalism’s ideological narrative that has upheld Chile as a “success story.”

Corporate journalists will most likely continue to muffle themselves vis-a-vis repressive US client states, in the same way that they systematically conceal the impact of Washington’s sanctions on Venezuela (FAIR.org, 6/26/19), which are estimated to have already killed 40,000 Venezuelans since 2017.

If the first casualty of war is truth, its self-anointed purveyors in the international media have much blood on their hands indeed.