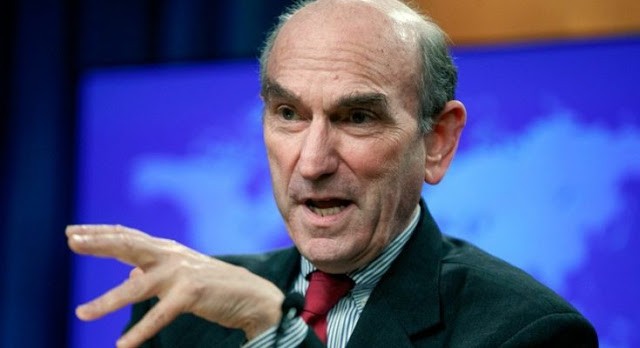 While the Venezuelan political opposition fails to understand its environment or its allies, the US advances in an offensive that seeks to nullify costs and risks.

With his acceptable knowledge of Spanish, Elliott Abrams, the “envoy” of the US government for Venezuela, does not need translators and even less, interpreters. That is why it can be affirmed without doubt that his position on the performance of his government against the “Maduro regime” has been invariable: although all the options were on the table, military intervention was always ruled out for the time being.

Hence, the “disenchantment” of  spokesmen of the Venezuelan opposition, expressed last Thursday, after Abrams told the Colombian radio station Caracol that no conventional armed intervention was planned, is further evidence of their inability to listen and understand what is happening around you and accept that nobody will come to do your homework.

A review of his statements since February demonstrates the consistency of the plan of the “envoy”, based essentially on “much humanitarian aid” or in any case in an exacerbation of the need for it. Abrams is willing to demonstrate that there is a humanitarian crisis and, if necessary, provoke it.

On February 21, the VOA (official US radio station) picked up his response, before traveling to Miami and Cúcuta, about the possibility denied of an overthrow of Maduro “today or tomorrow.” Very calmly (although in English) he said that “we will continue in the fight, we will continue sending humanitarian aid, we will continue to apply more pressure”. And showing indifference regarding the specific moment, he said that they would do so until the day the regime falls.

A week later he told Patricia Janiot, for Univision, that the military intervention was not planned and that the route was diplomatic, economic, financial and political pressure, along with the revocation of visas for officials and their families.

On March 11, in an interview with Actualidad Radio, in Miami, he again ruled out military intervention even though the National Assembly invoked article 187, ordinal 11, of the Constitution. And he was emphatic in pointing out that the US will remain on the path of political, economic and humanitarian pressures. He reiterated, almost with irony, that his government is “trying to give a lot of humanitarian aid to the country.”

But he added a new element, related to the contribution of the people of Venezuela to the overthrow of Maduro, which would be the execution of street protests that served as a mechanism of pressure on  the FANB and that it, in turn, would press for the resignation of the president. He gave as an example what had happened the previous Sunday in Algeria, where President Bouteflika had withdrawn his candidacy for re-election.

However, the Venezuelan opposition was not convinced that the US chooses, at least now, not to use the military way until Thursday, when Abrams said it again in Caracol.

For important opposition spokespeople, such as columnist Orlando Avendaño or VENTE political party leader María Corina Machado, Abrams’ statement was a surprise, and while the former took it as a surrender of Trump, for the second it was a demonstration that the times of the US government and its allies are not the same as those of Venezuelans.

However, possibly for Chavismo and for the Venezuelan government, more than a triumph against Trump, the opposition reaction is an acknowledgment of their inability to successfully confront the institutional structure through their own means and resources. It lacks capabilities on its own and inevitably depends on others to do the hard work.

In that sense, the position of those spokespersons deactivates the opposition bloc as a real adversary of Chavismo, to the point that it forces (now it does) articulators like the Jesuit father Luis Ugalde (high catholic church hierarchy), to propose a kind of capitulation in his article published on Friday in the SIC magazine, of the Gumilla Center, with the title “National agreement or death”.

Although the proposed surrender has its nuances and in reality seeks to justify it before the opposition’s social base, it is undoubtedly favorable for the government since it has canceled the pressures and demobilized it in an evident way, as happened with the “simulation” of Operation Libertad called last Saturday.

It also shows that the US and the allied governments are not willing to pay the cost of using the conventional military action to solve the “Venezuela case”.

It is worth noting that Abrams’ statements have been very skeptically received by Chavismo and were interpreted as a tactic to reach the military option, to do so in a surprising way. In this regard, the criminal profile of the “envoy” and his background with Nicaragua in the 1980s was argued.

In this sense, it is necessary to take into account that the motivation for Trump’s frontal entry into the dispute was linked to the possibility of having quick access and with costs close to zero, to Venezuela’s oil wealth. However, any increase in investment or the appearance of additional risks would be enough to get out of the attempt without many arguments.

Without ignoring that the offensive against the Bolivarian Revolution is part of the strategic vision of the US, it is convenient to specify that the tactical definition was developed by the Obama administration (with Hillary Clinton as Secretary of State) at the end of 2014 and was finalized in 2015 with the declaration of unusual threat.

On the other hand, an eventual increase in Venezuela’s oil production would not be convenient for companies in the sector that have made significant investments to guarantee the expansion of fracking within US territory, since it would tend to lower prices, which would make amortization difficult for the investments made. And on the other hand, that fall in prices would also discourage business in the “clean energy” sector. In this sense it is possible that the generous intervention of British magnate Richard Branson, who organized and financed the concert “Venezuela Aid Live”, on February 23, is related to his interests in the business of non-fossil electric generation.

On the other hand, for Venezuela and Chavismo, the choice of non-military pressure implies a growing and profound deterioration of its economy and productive infrastructure, as has occurred at least openly since March 2015, with the resulting penalties of “Obama’s Executive Order”. Without this implying a high political risk for the aggressor when his hostile action is diluted as part of an “economic crisis” derived from the alleged wrong policies of socialism or populism, as the media reports.

And in addition, the economic and institutional deterioration, in the context of an indefinite or barely identifiable aggressor, would favor the development of an opposition electoral option that is favorable to the interests of the US and the EU.

To this should be added actions of sabotage, such as the attack on the electrical system initiated a month ago, through technological mechanisms whose responsibility is difficult to determine.

The sum of these mechanisms could lead to an accelerated and widespread “humanitarian crisis” such as that announced by Abrams in each of his press statements and would allow the alliance against Venezuela to develop the strategic line of the “responsibility to protect” and consequently justify within a period of months (less than one year according to the “envoy”) a “humanitarian intervention”.