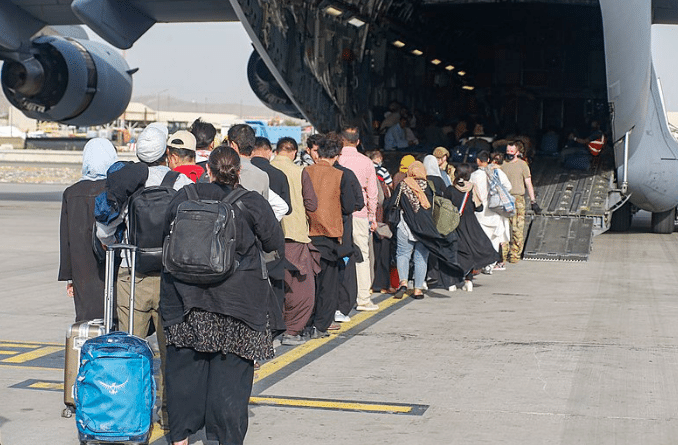 Scenes of thousands of Afghans flooding the Kabul International Airport to flee the country as Taliban fighters were quickly consolidating their control over the capital, raised many questions, leading amongst them: who are these people and why are they running away?

In the US and other Western media, answers were readily available: they were mostly ‘translators’, Afghans who ‘collaborated’ with the US and other NATO countries; ‘activists’ who were escaping from the brutality awaiting them once the Americans and their allies left the country, and so on.

Actually, the answer is far more complex than that offered by Western officials and media, which ultimately – although inaccurately – conveyed the impression that NATO armies were in Afghanistan to safeguard human rights, to educate women and to bring civilization to a seemingly barbaric culture.

Though political dissent is a basic human right, there is a clear and definitive line between the legitimate right to challenge one’s government/regime and willingly collaborating with another – especially when that collaboration can have dire consequences on one’s own people.

In the United States and Europe, there are thousands of political dissidents from many parts of the world – from South America, the Middle East, East Asia, and others – who are, sadly, used as cheerleaders for political and military interventions, either directly by certain governments, or indirectly, through lobby and pressure groups, academic circles and mainstream media.

These individuals, often promoted as ‘experts’, appear and disappear whenever they are useful and when their usefulness expires. Some might even be sincere and well-intentioned when they speak out against, for example, human rights violations committed by certain regimes in their own home countries, but the outcome of their testimonies is almost always translated to self-serving policies.

Thousands of Afghans – political dissidents, NATO collaborators, students, athletes and workers seeking opportunities – have already arrived in various western capitals. Expectedly, many are being used by the media and various pressure groups to retrospectively justify the war on Afghanistan, as if it was a moral war. Desperate to live up to the expectations, Afghan ‘activists’ are already popping up on western political platforms, speaking about the Taliban’s dismal record of human rights and, especially, women’s rights.

But what is the point of appealing to the western moral consciousness after 20 years of a NATO-led deadly invasion that has cost Afghanistan hundreds of thousands of innocent people?

In Afghanistan, an alternative narrative is evolving.

On September 11, hundreds of Afghan women protested in Kabul University, not against the Taliban, but against other Afghan women who purport to speak from western capitals about all Afghan women.

“We are against those women who are protesting on the streets, claiming they are representative of women,” one of the speakers said, Agency France Press reported.

While AFP made a point of repeating that the women protesters have “pledged” their commitment to “all Taliban’s hardline policies on gender segregation”, emphasizing how they were all covered “head to toe,” the event was significant. Among many issues, it raises the question: who represents Afghan women, those who left or those who stayed?

A large banner held by the protesters in Kabul read: “Women who left Afghanistan cannot represent us.”

The truth is no one represents Afghan women except those who are democratically elected by Afghan society to represent all sectors of that society, women included. Until real democracy is practiced in Afghanistan, the struggle will continue for real freedom, human rights, equality and, obviously, representation.

This fight can only take place within an organic, grassroots Afghan context – whether in Afghanistan or outside of the country – but certainly not through Fox News, the BBC or US Senate hearings.

The late Palestinian-American scholar, Professor Edward Said, had repeatedly warned of the pseudo-reality painted by the ‘native informants’ – supposed political dissidents recruited by western governments to provide a convenient depiction of the reality in the Middle East and elsewhere, as a moral justification for war. The consequences, as the 2003 Iraq war and invasion have demonstrated, can be horrific.

Said challenged a particular ‘native informant’, the late Fouad Ajami, a Lebanese academic, whose ideas about the Iraqi enthusiasm for the US war, though proved disastrously wrong, were used by George W. Bush and others as proof that the impending war was destined to be a ‘cakewalk’.

Ajami’s ideas were long discredited, but the political machinations that still prefer ‘native informants’ to genuine human rights defenders and good scholarship remain in place. Many of the Afghan escapees are sure to be strategically placed through the same channels, which continue to promote interventions and sanctions as sound policies.

The war in Afghanistan has ended, hopefully for good, but the conflict on who represents the people of that war-torn country remains unresolved. It behooves the Taliban to deliver on its promises regarding equal representation and political plurality, otherwise, there are many others abroad who will be ready to claim the role of legitimate representation.

In the Middle East, in particular, we have already witnessed this phenomenon of the west-based ‘legitimate’ democratic representations. Ultimately, these ‘governments-in-exile’ wrought nothing but further political deception, division, corruption, and continued war.