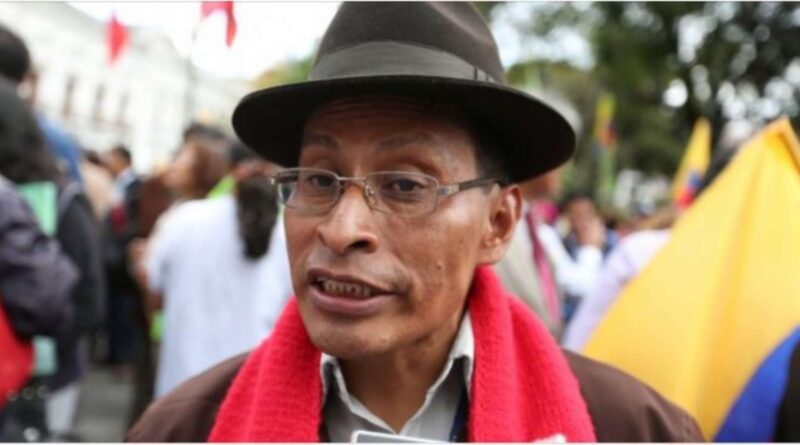 José Agualsaca is a well-known Ecuadorian indigenous leader who is currently running as a candidate for the National Assembly. Agualsaca has been a protagonist, together with the rest of the men and women of the indigenous peoples, of the uprisings against the International Monetary Fund’s package and also against the arrests that took place during those days to punish the fighters. That is why, a few hours before the critical election on Sunday, February 7, we spoke with him to get an insight into the atmosphere before what’s expected to be a triumph for the Arauz-Rabascal formula.

-How have you seen the campaign of the Arauz-Rabascall campaign within indigenous communities?

We have suffered attacks and betrayals of all kinds. We have suffered a campaign to try to stop the return of progressivism. We were not been given the opportunity in time to register our candidacies. But we managed to dialogue with the candidacy of Andrés Arauz and Carlos Rabascall, and thus recover progressivism with all the political support of President Rafael Correa Delgado. I am the fourth candidate for the General Assembly and representative of the indigenous peoples and nationalities of Ecuador. We have campaigned with sacrifice, with difficulties, but nevertheless, we have reached the majority of the indigenous population of the country to explain the problems that Ecuador is going through, as well as the countries of Latin America, the pandemic and also the betrayal of Lenín Moreno.

-How was your proposal—to return to the Citizen’s Revolution developed when Correa was president—received?

In this sense, the people have reacted positively and this Thursday we have just closed the campaign in the capital of the Republic. On Sunday, the Ecuadorian people will vote en masse for the only hope that Ecuador has, the hope for access to health, the hope for land, the hope for water, the hope for credit, the hope for housing and security, the hope for food sovereignty, as defined in the 2008 Constitution promulgated by Rafael Correa and now set aside by this government that has embraced and implemented IMF policies, the shrinking of the state. They are trying to privatize the economy, they have laid off workers, there are a million Ecuadorians without jobs and without hope. Every day there are more robberies, people are dying due to lack of access to health care, and suicides have increased. There is terrible insecurity in the country. In the face of this, we want to say that in Ecuador, this government of treason, along with the bankers and the media, have accumulated resources and budgets for themselves. Agribusiness are also taking everything and harming the indigenous peasant people. In this way, poverty is consolidated and growing. Therefore, the alternative that we propose to the people is the ticket of Arauz and Rabascall.

-Specifically, what are the main priorities that you will fight for from the Assembly?

We are going to promote a system of health, education and food sovereignty. I come from the militancy of the left, of the communist youth, of Revolucion Ciudadana, and we are working full time. We gave everything and it’s really not difficult for me to know the reality of the indigenous peoples, the reality of the peasants, the reality of the Ecuadorian people. I know, as a leader and as a social activist, the people, and we are going with that momentum. We are going in that direction on Sunday. The indigenous communities that I represent are organized to position the Arauz government, we are going to defend the progressive people and we’re going to defend the priority of attention for the most vulnerable sectors, the peasants, the indigenous people. These are the general issues that we are dealing with. We have the perspective of power to manage the country and to push for a program of social development, a solidarity economy that will lift the country out of poverty. We know that small and medium-sized farmers, small and medium-sized entrepreneurs, small and medium-sized businessmen and indigenous peoples are the ones who are going to get Ecuador out of this brutal crisis we are suffering. We know that the bankers don’t even invest in the country, there is no social investment, they have taken billions of dollars to tax havens, we have an oligarchy that does not change, it is conservative, and does not think about human beings, nor social beings, and even less about social equality.

-What proposals are you going to make to unite the indigenous movement? We know that during Rafael Correa’s government there were difficulties with CONAIE, although now CONAIE does not support the Pachakutik candidate Yaku Pérez.

The important thing is that we have to get down to work. The one that I represent is the first indigenous organization born in 1945. From there we promoted the struggle for the agrarian revolution, for the issue of water, for the issue of credit. We fought against the landowners, against the land-grabbers. In fact, [in] the 1990 uprising in which all the organizations, CONAIE and other fraternal organizations participated. We came together and fought from 1996 to 2006 against those who governed, we always had to stand up and protest. The governments don’t give us a place, however. From 2006 to 2017 there was economic and political stability and the fundamental improvement of all the people. In this sense, we believe that the most important thing for indigenous peoples is the construction of a multicultural and plurinational state, as stated in Article 1 of the Constitution. Article 57 recognizes the rights of the indigenous peoples, black people, and other diverse communities of the country. The important thing in the agrarian revolution is land and water. And with that, food sovereignty would be consolidated. In the indigenous movement there are two ideological paths. One is the ethnic indigenous movement that fights for the peasant peoples, while the other is a class-based indigenous movement, in which I am an activist, and we have always fought against the landowners, against the bankers, and currently we are confronting the agro-industrialists, the capitalists and the neo-liberal model. In other words, we in the indigenous class movement, which I represent, are fighting for the transformation of the state, [for] transformation of society and the improvement of the quality of life of Ecuadorians. We have to dialogue with the organizations and fight for common objectives, as the Constitution says, in the construction of an intercultural and plurinational state. Attention to the issue of indigenous peoples and also agrarian demands is fundamental.

-You are also part of the ALBA Movement in Ecuador. What will the Arauz and Rabascall government’s actions be like with regard to Latin America and also in the face of the difficult relations with the United States?