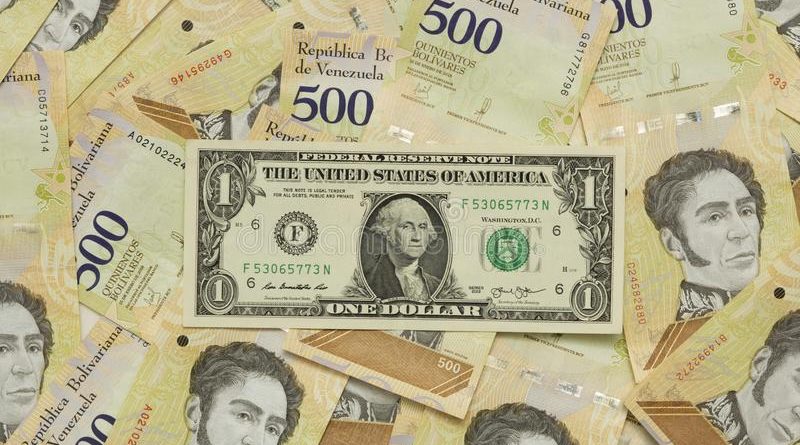 The black market dollar continues its upward trend, as has been registered in recent days and with “unpredictable” behavior.

The value of the US currency is already above 20,000 bolivars, a devaluation of 28%, in the last seven days.

Similarly, the Central Bank of Venezuela (BCV) said, on Tuesday afternoon, that the value of that currency according to the average official rate is 17,551, 73 bolivars.

Economists used social networks to explain the behavior of the currency in the black market:

“The dollar does not go up for retail. It rises because a group of companies were paid in bolivars and are covering themselves by buying dollars. In a shallow, shallow market, with very little supply and demand, the price over-reacts. There are [only a] few actors. That is why when one of them presses the demand because it has bolivars and is willing to pay whatever, the rate at which the exchange rate rises increases.”

Then he added: “The problem is not transparency, the key issue here is that with this model, the exchange rate cannot be stabilized. Even were the market handled by Jesus and the 12 apostles. ”

“There is no surprise in the severe increase in the parallel dollar (which pushes the official rate). In a market with total “reserve requirements” and artificial liquidity restriction, when the government or PDVSA have to pay bolivars, the exchange is triggered and distrust finishes it, ”he insisted.

He explained that “the current increase in the dollar does not correct the overvaluation of the Bolivar. It is still cheap. Its displacement will slow down when the excess of Bolivars that stimulate its current demand run out. Then there will be more inflation, more overvaluation and another devaluation. The dog biting its tail. ”

José Guerra, deputy of the AN and economist

“To those who ask me about this maxi depreciation of the bolivar these days. Here is my answer: people are repudiating the bolivar because they are anticipating that inflation is going to accelerate and those who stay long in bolivars would be ruined. Nobody wants bolivars. ”

RELATED CONTENT: Tales of Resistance: No Growth or Prosperity

“And to think that in the second semester is where we will see a greater execution of public spending (for those who think that the parallel cannot go up any more). Whenever you have doubts about the trajectory of the parallel, remember the prophet of “the dollar is expensive, the unification is coming”.

“Beyond the increase in liquidity and sanctions, it is a kind of adaptation of the dollar that has been lagging behind and is now moving towards its true value,” the economist told Unión Radio.

The researcher of the Center for Research and Training Workers said that inflation “pushes the exchange rate.” “The government has used fictitious money, fictitious capital, and when that money enters the economy it causes inflation, and inflation is what causes or pushes the exchange rate towards devaluation, i.e., to have to give more bolivars for the same amount of dollars”.

“Operations have been increasing both in buying and selling. The market is becoming more dynamic, because specific imports are being registered for trade, on the one hand, while the government is gradually making payments to suppliers, whose destination is the purchase of dollars or euros,” says an analysis of the portal Banking and Business and about the behavior of the currency.

“Likewise, the number of bidders of smaller amounts has increased, because inflation forces us to require more foreign exchange to meet the basic needs of those privileged who are lucky enough to receive foreign currency,” they said.