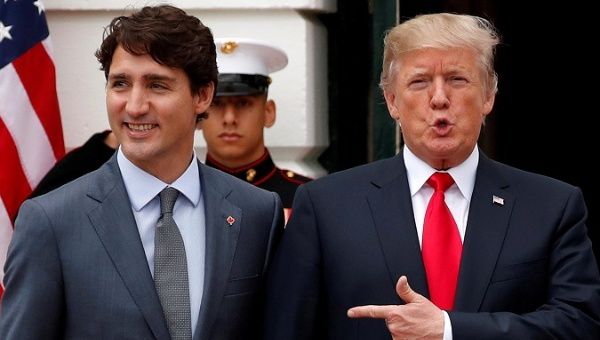 Indeed, US-Lima Group policy represents a declaration of war, even though there has yet to be any military intervention as such.

Since the attempted U.S. coup against Venezuela on January 23, backed by the Lima Group of which the Justin Trudeau government is an active member, Canada’s corporate media have joined in a chorus of hate and disinformation against the Bolivarian Revolution, with the criticism focusing on Nicolás Maduro, the country’s constitutionally elected president.

In response to the nationalization of certain companies by the previous Chávez government, a number of Canadian companies have undertaken legal battles.

At the same time, a debate has arisen among workers, trade unionists, and social and political activists. A few months ago, the Cuban daily Trabajadores reported the response of Canadian affiliates (over 5 million workers speaking through their unions) in support of Venezuela’s right to self-determination and to be free from interference by the United States and the Lima Group in its internal affairs. New actions and statements are still emerging from the grassroots.

Examples include a series of articles that have appeared in the alternative press and on Canadian social networks, especially those representing left-wing and progressive forces; indeed, anyone who opposes foreign interference. These pieces lead us to wonder: what is Canada up to and why?

These authors bravely question the traditional media, which only have space for writers who make sure to use key words like “contested elections” and to call Maduro an “authoritarian” in their pieces. Such phrases afford credibility to the narrative put forward by the United States and the Lima Group to the effect that interference in Venezuela’s affairs is a putative matter of “humanitarian” necessity.

The corporate media suppress any attempt to give a serious answer to the question: why Canada? In this way, despite Canada’s pretense of being a paragon of freedom of expression and the press, the truth is being hidden from the public.

What Progressive Canadian Journalists and Writers are Saying

The search for gold in the mythical place of El Dorado in Latin America drew armies of Spanish conquistadors in the 16th century and caused many deaths of indigenous people. The gold remained elusive, but Spain colonized most of the region and exploited other riches until the Latin American independence movements of the 19th century.

But the search for gold never really ended, be it black gold – crude oil – or real gold of which Venezuela has plenty. The United States has publicly declared that is interested in the black gold. In the meantime, Canada has remained more secretive about its aspirations in its ventures in Venezuela. The truth is that Canada has corporate interests in the mining sector, and gold in particular.

In a bid for a greater share of oil revenue, Venezuela forced private oil companies to become minority partners with the state oil company in 2007. This prompted Calgary-based Petro-Canada to sell its portion of an oil project and Canadian officials to privately complain about feeling ‘burned’ by the Venezuelan government…

A number of Canadian companies clashed with Hugo Chavez’ government over its bid to gain greater control over gold extraction. Crystallex, Vanessa Ventures, Gold Reserve Inc. and Rusoro Mining all had prolonged legal battles with the Venezuelan government. In 2016 Rusoro Mining won a $1 billion claim under the Canada-Venezuela investment treaty. That same year Crystallex was awarded $1.2 billion under the Canada-Venezuela investment treaty. Both companies continue to pursue payments and have pursued [sic] the money from Citgo, the Venezuelan government owned gasoline retailer in the US.

In 2011, the Financial Post reported that ‘years after pushing foreign investment away from his gold mining sector, Venezuelan President Chavez is moving on to the next stage: outright nationalization.’ Highlighting its importance to Canadian capital, the Globe and Mail editorial board criticized the move in a piece titled “Chavez nationalizes all gold mines in Venezuela…

Barrick Gold founder Peter Munk wrote a 2007 letter to the Financial Times headlined ‘Stop Chavez’ Demagoguery Before it is Too Late.’” [Munk wrote] … “aren’t we ignoring the lessons of history and forgetting that the dictators Hitler, Mugabe, Pol Pot and so on became heads of state by a democratic process? … autocratic demagogues in the Chavez mode get away with [it] until their countries become totalitarian regimes like Nazi Germany, the Soviet Union, or Slobodan Milosevic’s Serbia… Let us not give President Chavez a chance to do the same step- by-step transformation of Venezuela…

The banks too, says Engler, have worked to bring about this liberalization:

A few days after Chavez’s 2013 death the Globe and Mail’s ‘Report on Business’ published a front-page story about Scotiabank’s interests in Venezuela, which were acquired just before his rise to power. It noted: ‘Bank of Nova Scotia [Scotiabank] is often lauded for its bold expansion into Latin America, having completed major acquisitions in Colombia and Peru. But when it comes to Venezuela, the bank has done little for the past 15 years – primarily because the government of President Hugo Chavez has been hostile to large-scale foreign investment.’

These considerations no doubt explain why the Trudeau government has been involved in Donald Trump’s attempted coups against Venezuela. Canada is also spearheading the economic sanctions imposed on the country, which recent studies have termed genocidal. Indeed, US-Lima Group policy represents a declaration of war, even though there has yet to be any military intervention as such.

Is this the only way Canada can defend the interests of its companies in Venezuela? Surely not. There must be much more “Canadian” approaches that it can draw upon.