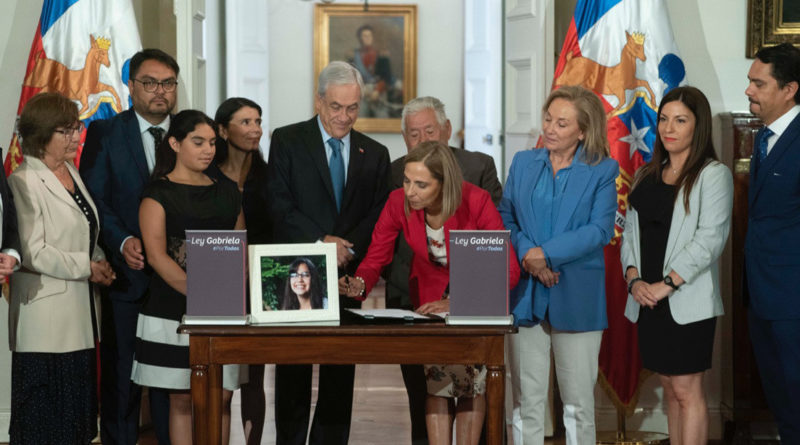 A phrase of the Chilean president in his speech (“because sometimes it is not only the will of men to abuse, but also the position of women to be abused”) unleashed the anger of those who expect more justice for women thanks to the promulgation of the so-called ‘Gabriela Law’, a regulation that extends the criminalization of the crime of femicide.

This Monday, the president of Chile, Sebastián Piñera, promulgated the so-called ‘Gabriela Law’, a regulation that broadens the criminalization of the crime of femicide and includes relationships of courtship and ‘pololeo’, a Chilean term that refers to informal relations.

The regulations are known as Gabriela, because they are inspired by Gabriela Alcaíno, 17 , and her mother Carolina Donoso, 53, who died after being stabbed by a man with whom the teenager had an informal relationship, in June 2018, and whose crimes were not classified as femicide, because the law considers that crime only when the victim “is or has been the spouse or the cohabitation of the criminal.”

In the act of promulgation, Piñera referred to this case and pointed out that Gabriela, at some point in her short life, said that her mother had taught her about “self-love” and that “no one can put a finger on her.”

“That reflected an attitude that is very necessary. Because sometimes it is not only the will of men to abuse, but also the position of women to be abused,” said the president. He added: “We have to correct the one who abuses and we have to tell the person (women) that she cannot allow that to happen and that the whole society will help and support her in denouncing and preventing those events from happening.”

Criticism of his statement
Immediately, criticism rained against the president, for placing the victimizer and the victims on the same level.

In social networks, they pointed out that Piñera “does not understand” about gender-based violence and emphasized that “the victim never has the responsibility for their abuse.”

In Chile, president Sebastian Piñera passed a law named “Gabriela law” to strengthen the exisiting legislation against femicide. During the speech, he said “it’s not only the men’s willingness to abuse, but also the women’s position to be abused.” https://t.co/wpVkyzh75O

Minister “clarifies” the statements of Piñera
After the controversy was generated, the Minister of Women, Isabel Plá, defended the president and said that what he meant “never had to do with holding women accountable.”

“The president has said, let the women of our country know that when you denounce [abuse], you will have the support of society, of institutions, of all the powers of the State.”

The promulgated ‘Gabriela Law’ modifies the current typification of femicide in Chile, mainly because it is incorporated into couples without cohabitation and aggressions within the ‘pololeo’.

In addition, the figure of femicide is established for gender reasons; which will be considered when death occurs in the following cases:

The regulations also consider some aggravating factors, as when the victim is pregnant, if she is under 18 or in a condition of disability, among others, the government official stated.

The outrage was so evident that the far right President himself had to tweet trying to “clarify” but evidently wrenching what he said, that was recorded on video:

Let’s be clear: I have never said that women have responsibility. What I said is that too many abused women can not denounce [abuse] and do not receive prompt and proper attention. For that the Gabriela Law and our policy of zero tolerance against abuse and violence towards woman, he posted while many Chileans still have fresh images in their mind of police sexual abuses during the protest against neoliberalism in the South American country.