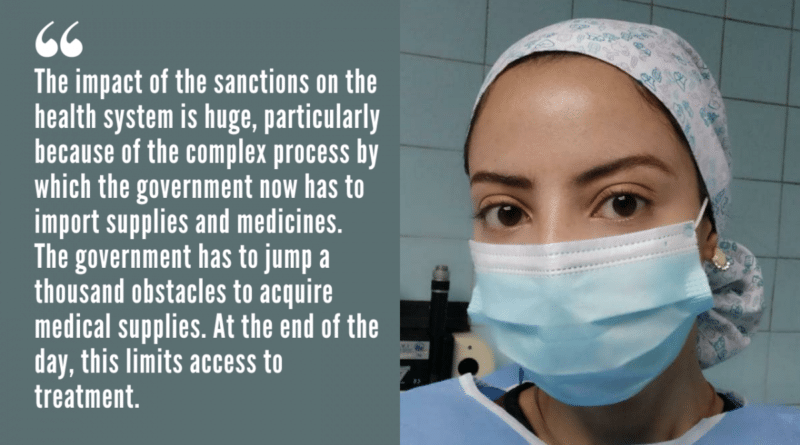 Frontline health workers reflect on the first year of the pandemic in Venezuela.

Elisabeth Daza and José Mireles are frontline medical workers in Caracas. Daza is doing her residency at the Angel Vicente Ochoa Ambulatory in the working class “Cementerio” barrio in Caracas. Mireles, a third-year medical student at the Hugo Chávez University of Health Sciences, is regional secretary of the Venezuelan University Student Federation and president of his university’s student center. Last year we interviewed both Daza and Mireles about Venezuela’s then successful strategy against Covid-19. One year later, the healthcare system – which was deficient before the pandemic but now further weakened by sanctions – is displaying its limitations.

A year ago, the government’s fight against Covid-19 looked very successful. Authorities implemented a country-wide radical confinement and quarantined many of those who had tested positive or were exposed to the virus in state-run centers. House-to-house visits to locate outbreaks and to inform the population were also put in place. How has prevention and care changed since we last talked?

Mireles: The first case in Venezuela was detected in March 2020 and the government immediately decreed radical confinement. Strict confinement was followed by the 7×7 model: a week of radical quarantine in which people are confined to their homes with the exception of key area workers (food, health, security, and telecommunications), followed by a week of flexibilization where most sectors of the economy reopen. As an alternative, when cases go up, the 7×14 model is implemented: one week of flexibilization followed by two weeks of confinement.

During the first months, these measures went hand in hand with vigilance and strict compliance with biosecurity rules: correct use of masks, personal hygiene, etc. However, as the months went by and vigilance eroded, people became less compliant.

At the community care level, the first months involved an active house-to-house screening process to map pathologies and locate outbreaks. This process continues, but it is far less frequent due to the high number of medical personnel needed in sentinel hospitals [hospitals that are prepared to receive Covid-19 patients] and field hospitals.

At the national level, the government set up a network of field hospitals for patients with mild Covid-19 symptoms. These hospitals are located in sports centers such as the Poliedro de Caracas. Patients with severe symptoms are sent to sentinel hospitals, where the capacity has increased somewhat, although the infection curve is putting pressure on them.

In fact, it is no secret that the hospital infrastructure has deteriorated over time and available beds and ICU units are limited. This is why hospitals are forced to prioritize severe cases, while less serious ones must be treated in field hospitals or at home. Even though we saw some steps in the right direction, our public healthcare system was not prepared for a pandemic.

Fortunately, we have been able to expand our diagnostic capacity. A year ago, PCR testing could only be processed in state laboratories in Caracas. Today there are a number of mobile laboratories, and they are deployed in hotspots such as border posts. Also, from day one, tests have been performed free of charge with one exception: those coming into the country from abroad through Maiquetía’s International Airport must be tested, and they have to pay US $60 to 80.

Finally, I should add that the Ministry of Science and Technology and the Venezuelan Institute for Scientific Research [IVIC] are developing a line of Covid-19 treatments, and Carvativir, a drug that strengthens the immune system, is already being distributed.

Later we will talk about the vaccination process, but Venezuela has received some seven hundred thousand doses, mostly Sputnik V [Russia], but also Sinopharm [China]. Soon we will be receiving Soberana II [Cuba], recently approved by the World Health Organization. Of course, the vaccination process is slow due in part to the sanctions, which limit Venezuela’s capacity to purchase them.

Daza: Indeed, the situation has changed quite a bit since we talked a year ago. Radical confinement to limit the spread of the virus was in place: only essential sectors were allowed to open and there was a 2:00 pm curfew. That was followed by periods of flexibilization reactivating non-essential sectors of the economy. This increased the number of people on the street and, of course, the number of contagions.

Confinement was relaxed because people need to make a living and run errands. In fact, while it is not a perfect system, alternating flexibilization with confinement is a good solution.

Regarding the house-to-house visits, currently they are far less common, as José mentioned. Fortunately, the population is now aware of Covid-19 symptoms, so the process of mapping cases is no longer so important.

However, it was in a recent house-to-house process that a major outbreak of the Brazilian strain was detected in Caracas’ 23 de Enero barrio. That was followed by an epidemiological encirclement. Through experience, we have learned to take such initiatives.

Finally, throughout the year, the attention to mild and asymptomatic patients has changed: at first, all positive cases, symptomatic or not, were hospitalized or isolated. Even those who had only been in contact with positive cases were isolated in state-run centers. Now only patients with more complex symptoms are admitted to the hospitals. This happens either because people do not want to go into fully isolated confinement or because there is just no capacity to take people in.

There has recently been an upturn in the number of cases. Why is this happening?

Mireles: Many factors have contributed to the upsurge. During the first months, confinement and surveillance were very strict. In those months, perhaps until October [2020], mobility was restricted, and people who did not comply with the rules were sanctioned.

To this, we must add another factor: the arrival of two new strains from Brazil. These strains are highly contagious and can lead to the patient’s condition deteriorating more rapidly. Last year we saw mortality mainly in people in their 70s and 80s. Now we see people in their 30s, 40s, and 50s dying as well.

I am convinced that we urgently need an awareness campaign. However, we cannot fail to recognize that most people don’t have savings and have to work. In other words, radical confinement cannot be imposed right now.

A year after the beginning of the pandemic it is evident that people’s material conditions have worsened: many lost their jobs and many don’t receive social protection from the government. Inequality is growing and people are being forced to seek alternatives to survive.

Daza: Indeed, there are several factors contributing to the upward turn in the infection rates. First, the exponential growth in cases puts a lot of pressure on the healthcare system. We see more positive cases, but we also have to attend to recovered patients who have sequelae and need to continue receiving oxygen. All this puts pressure on the system.

In the beginning, with the system less burdened, care was more comprehensive and recovery was faster, so it was easier to admit patients. In the early days of the pandemic, we also had a more comprehensive view of the situation through testing. However, with more people presenting symptoms, satisfying the demand for testing becomes harder.

Of course, flexibilization also has implications, although it is necessary – people need to work.

To this, I would add another factor, which goes along with what José was mentioning: the population is not entirely clear about how to protect itself. Although people in the city center wear masks, social distancing, frequent hand washing, and constant use alcohol need to be reimplemented. That requires a broad public campaign: radio, television, and social networks. These instruments must be used so that people comply. If this doesn’t happen, numbers will continue to go up.

I think it is important that we examine the upsurge and the problems that we face in a regional context. During the first months of the pandemic, the Colombian and Brazillian healthcare systems collapsed. Here, with the policies that were implemented, we were able to flatten the curve for a while. This has its virtues and its limitations. The virtues are obvious, but the limitation is that the population, which has had limited exposure to the virus until now, is relatively relaxed: parties happen, some people do not wear masks, people don’t comply with social distancing, etc… and so numbers are going up.

In Venezuela, we managed to postpone the entry of the virus to a large degree, but now we are facing many infections and an overloaded healthcare system. The situation is getting more complicated.

How do the sanctions impact the Venezuelan healthcare system, especially in this pandemic context?

Daza: The impact of the sanctions on the health system is huge, particularly because of the complex process by which the government now has to import supplies and medicines. The government has to jump a thousand obstacles to acquire medical supplies. At the end of the day, this limits access to treatment.

However, we have also seen bottlenecks in other countries. In addition to the criminal sanctions, the world economic model is failing: the crisis is systemic and global. A lack of supplies and PPE shortages is not unique to Venezuela. Listening to the news, it becomes rapidly evident that the healthcare systems in two neighboring countries, Colombia and Brazil, are close to collapse.

To get a better picture of what is happening in Venezuela, I would like to discuss the Poliedro in Caracas, which is the largest field hospital in this country. I have talked to several colleagues who are working there and they tell me that most medicines are in supply, although there are shortages of Azithromycin and Levofloxacin, antibiotics used to address bacterial infections.

Through agreements with Iran, China, and Russia, we have been able to import medicines. However, syringes, PPE, and beds are in short supply. Beyond the lack of supplies, however, perhaps the main problem at the Poliedro is the lack of personnel: it isn’t enough to cover the number of patients that arrive there every day!

Mireles: Undoubtedly, the unilateral sanctions have a huge impact on the healthcare system, and the situation has worsened with the pandemic. These coercive measures have limited our access to medical supplies and medications. Sanctions have also delayed the acquisition of vaccines through the UN’s COVAX program.

Venezuela has a population of approximately thirty million, but to date only about seven hundred thousand vaccine doses have arrived. This is partly due to the fact that the sanctions prevent the government from negotiating directly with pharmaceutical companies to purchase vaccines.

Moreover, sanctions not only limit access to the supplies required to fight the pandemic, but there are also many other medical supplies which the country needs, from insulin to treatments for cancer patients.

The sanctions are criminal. As people on the frontline of the fight against Covid, we have to say so.