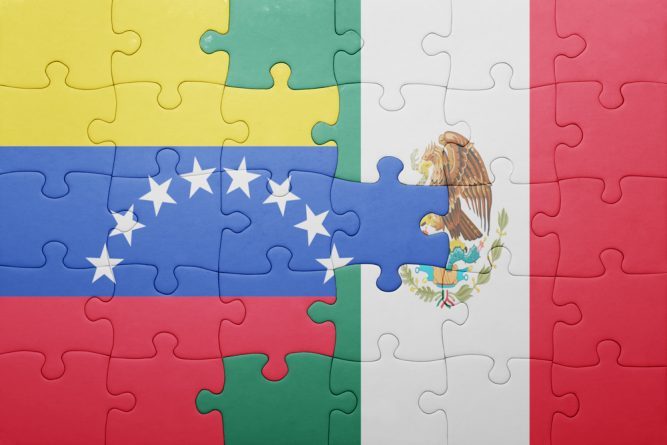 The imminent visit of Nicolás Maduro to Mexico has aroused the outrage not only of the right, but also of some sectors of Morena.

Although López Obrador has made it clear that all the presidents of the world, including Maduro, are welcome, it is striking that the neoliberal right and the lightberal progress have not protested the arrival of Mike Pence, vice president of the United States, human rights violator (both within US borders, as in other regions of the world, from Latin America to the Middle East) or Iván Duque, Uribe’s dolphin, whose legacy in Colombia of disappearances and false positives leaves more human remains in common graves that all the military dictatorships of the southern cone as a whole; a Colombia where today, during Duque’s government, dozens of social fighters continue to disappear (more than 150 since the recent peace agreements were signed with the FARC-EP).

Nothing of the previous thing happens in Venezuela, whose government does not have military bases in foreign territory, does not impel coups d’etat nor makes political interference in other countries, and neither disappears social leaders; However, the opinion trends that are built, especially around two axes, economic crisis and migratory exodus, to force us permanently to comment on their government.

Let’s talk and debate then, about the two trends around Venezuela on which people who have never been in that Caribbean country, which has the largest certified oil reserves in the world (added to the very high reserves of gold or coltan, besides a south-south link with China or Russia), they think from what they see or read in the mass media.

There is no doubt that Venezuela is immersed in a serious economic crisis. What is perhaps not so well known is that it is the result of the executive order of Barack Obama, of March 2013, which declared Venezuela a danger to the national security of the United States. Order that has allowed a multidimensional attack on the Venezuelan economic structure.

On the one hand, through the economic sanctions that affect the accounts that the Venezuelan government uses for its purchases abroad to the financial investigation unit that investigates, and blocks if necessary, accounts of the Islamic State and other terrorist groups. This has allowed, for example, that banks such as Citibank blocked in September 2017 the purchase of 30 thousand units of insulin, or that on May 18, 2018, two days before the presidential election, Colombia blocked the arrival of 15 containers with 25 thousand boxes CLAP (Local Committee of Supply and Production, a reinforcement of the Venezuelan government to guarantee the food security of its population) that contained 400 thousand kilos of food.

And for those who still doubt the existence of a blockade, the Brazilian foreign minister recently admitted that they can not pay a debt of 40 million dollars to the Venezuelan state company Corpoelec (for the supply of electricity to the state of Roraima) due to sanctions imposed by the United States and the European Union.

This block has two more components. In the first place, the surgical operation of the US economic elites through its rating agencies Standard & Poor’s, Fitch Ratings and Moody’s, placing the Venezuelan debt (as JP Morgan does with country risk) at the level of African countries in armed conflict. The objective is clear: to drive away any possible foreign investment. And the circle initiated by Obama in 2013 is closed in 2018 by the Trump administration, with sanctions against PDVSA with another clear objective, reduce the income capacity of a country that lives and moves from the oil rent.

To this media trend against Venezuela we must add the so-called migratory exodus. While Televisa’s top journalists go to the Venezuelan border to show us the border reality, no media goes to nearby Honduras to make a story that explains why thousands and thousands of Central American brothers flee their country with only a backpack on their backs, crossing rivers, mountains and entire countries, risking kidnap and murder in the vast areas of Mexican territory controlled by criminal mafias and narco.

One fact: while Honduran migration belongs to the lowest socioeconomic strata, direct victims of the doctrine of the neo liberal shock therapy, the majority of the Venezuelan population that migrates (52%), according to the National Survey of Living Conditions of the Venezuelan Population, belongs to the upper-middle and upper classes. 82 percent of the total claims to migrate in search of better economic prospects.

It is therefore a lie that the Venezuelan migration is due to political issues (there are very few requests for asylum and refuge granted by the member countries of the Belligerent Group of Lima). The Venezuelan migrant population does it for economic reasons, looking for a better future, something as dignified and legitimate as when more than 20 million people do in Mexico and Colombia.

In short, hopefully Nicolás Maduro’s visit to Mexico will help us to discuss the Venezuelan reality objectively, taking distance from the media noise produced by geopolitical interests.