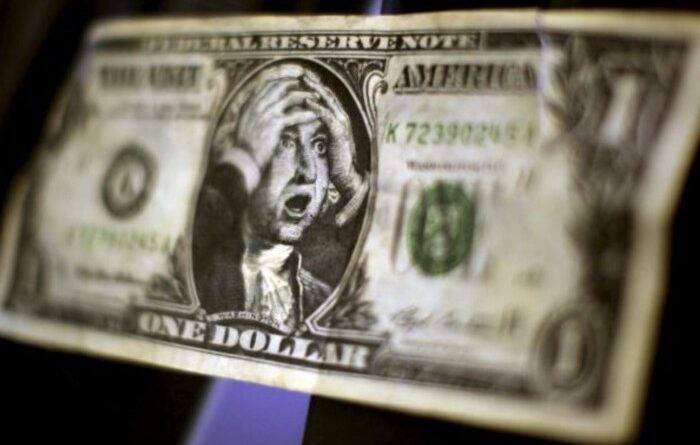 It’s not just that the hope for a V-shaped recovery from this last year’s economic crisis has been lost. It’s not just that we can expect a double-dip recession, as the media has called it. It’s that the contradictions within 21st-century capitalism are going to produce a financial meltdown larger than the one from 2008, and that the very tools we’re using to try to survive the current stage of capitalist crisis will make the meltdown even worse.

These tools relate to the piling up of debt throughout the US economy, an event which neoliberalism has made inevitable since the 2008 crash. Ordinary people have had no choice but to take on the record amounts of credit card debt which now hangs over US households. With the perpetual depression we’ve been stuck in for the last thirteen years, credit has served as a lifeline, letting us keep buying food and paying the bills despite being broke. The system has coerced us into ingesting poison to keep us temporarily safe from the worst miseries of poverty. And as the finance commentator Condoda has observed, this destructive and unstable process has been marketed to us under an absurd brand of “security”:

Decade after decade, similar booms and busts surfaced across the world, with the same flawed thinking from elites producing the same result. But when the 2008 financial crisis came along, the rules of the game changed. The interconnectedness of global finance meant that one asset class was capable of bringing down the entire system. The US government and the Federal Reserve “had no choice” but to use the same policies that had caused the crisis, to prevent a collapse. Their solution? Turn the entire US economy into one gigantic moral hazard. Thirteen years on, and bubbles are no longer bubbles. Instead, they have become the hip, new asset class on the street. Every speculative asset class has been “securitized”: stocks, corporate debt, real estate, fine wine, fine art, vintage guitars. Take your pick. You’re spoilt for choice. Valuations don’t matter. It’s whether the price goes up or down.

The reality behind this that Wall Street hides, concludes Condoda, is a situation where the entire economy has effectively become “sub-primed.” Which is a poetically heinous strategy for Wall Street to take, since sub-prime loans consist of loans with higher-than-normal interest rates which are given to those who don’t qualify for prime loans. And the tens of millions of people in this country who’ve slipped into poverty these last thirteen years, who are desperate for any momentary access to money, have been perfect targets for the sub-prime strategy of offering benefits to people while demanding wild amounts of money in return. This describes the debt servitude trap that most working class people in this country now find themselves locked into.

Such is the existential horror that neoliberalism has forced upon the proletariat within the core of global imperialism. In order to survive under this system of hyper-financialized monopoly, privatized essential resources, austerity and falling wages, they need to dig themselves ever deeper into debt. And when this results in the popping of an unprecedented economic bubble, they’ll again pay the price for the system’s failures.

The Biden administration and the Federal Reserve are trying to offset this cruel reality with their stimulus. But under such a concentrated and dangerous financial system, the printing of $1.9 trillion more will help exacerbate the additional factor of the US dollar’s destabilization. As Market Watch’s Peter Morici has written:

Very little of the new debt or money will be backed by new productive assets or a larger economy. Real gross domestic product will not rebound to pre-pandemic levels much before early 2022. A lot of capital assets — vacant office buildings, aircraft and the like — won’t be needed again for several years and have lower intrinsic value now than before the pandemic…the lessons from the oil crises of the 1970s indicates supply shortages tend to set off self-perpetuating cycles of inflation, as pricing pressures spread through labor and goods markets generally. Paul Volcker, who took the helm at the Fed in 1979, tamed inflation by jacking up interest and unemployment rates. The sum of the inflation rate and the unemployment rate became Ronald Reagan’s misery index and cost Jimmy Carter a second term. Now it could become just as bad.

Again, isn’t it poetic? The economic crisis of the 1970s, itself an early part of the internal blowback from Washington’s imperialist actions, was what started off the ongoing campaign to redistribute wealth upwards through neoliberalism. Now neoliberalism has brought things to a point where the same kind of blowback is set to soon happen, except in an enormously more destructive way which causes the economy to irreversibly contract.

I say “irreversibly” because this financial unraveling looms amid the permanent decline of US imperial hegemony, an event which it’s becoming more and more clear will entail a dollar crash. Earlier this year, the dollar’s purchasing power reached its lowest point on record, a development that supports the prediction from economist Stephen Roach about how the dollar will experience a value drop of at least 30% by the end of 2021.

RELATED CONTENT: Fears of Proletarian Revolution are Behind the Campaign to Censor the Internet

As Roach observes, the pushback against his claim was all about the conventional financial wisdom that there’s no viable alternative to the US dollar, and that such a crash for it would therefore be unrealistic. But Roach has pointed out the recent upsurges for currencies which rival the dollar, observing how “China’s yuan has appreciated about 4% since last June and should continue to strengthen as China leads the post-COVID global recovery… Meanwhile, gold prices surged for a couple of months in June and July but then retraced those gains over the balance of the year. It was a different story for cryptocurrencies. Little did I know what was to come for Bitcoin, which surged four-fold since June, or two-and-a-half times the late 2017 spike that, at the time, had been depicted as one of the greatest speculative bubbles in history.”

There’s still evidence that Bitcoin represents a bubble akin to the one that produced the subprime mortgage crash, as has been observed by “Big Short” investor Michael Burry. But doesn’t this represent yet another part of the all-encompassing financial bubble that neoliberal financialization has brought us towards? In a situation where US GDP remains unable to recover from the fact that last year it experienced its biggest contraction since the second world war, where the dollar has reached its lowest buying power on record, and layoffs remain high after the tens of millions of jobs the country has lost in the last twelve months, two unstable currencies are competing for primacy over a financial system that’s “securitized” itself into severe debt.

These events can only preclude the acceleration of class struggle. In the US empire’s neo-colonies, where the chain of capital is far weaker than in the imperialist countries, the class struggle has reached a far more advanced state than here. A quarter of a billion people just went on strike in India, Haiti has been shut down by a general strike, and Ecuadorians are ready to mobilize towards defending democracy if their ruling class tries to prevent the election of an anti-IMF candidate. The weakening of the chain of capital in the US gives Marxists in this country more potential to radicalize the masses, and to organize towards proletarian revolution.