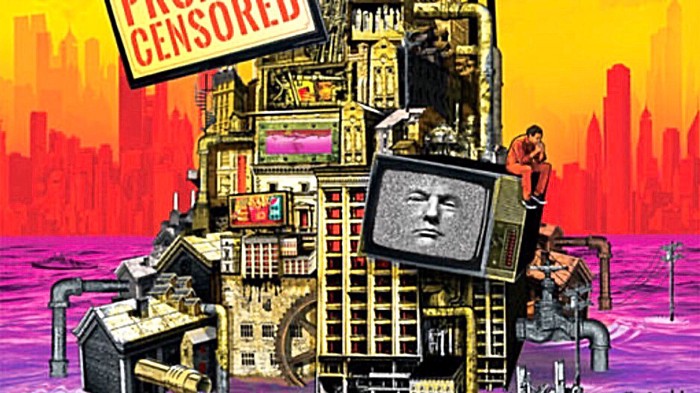 Behind all these censorship debates, Big Tech crackdown measures, and demagogic rhetoric about how Washington’s rivals seek to exploit the current chaos, there’s a war going on for which class holds control over the predominant consciousness of the masses within the United States. The capitalist state isn’t nearly as concerned about the threat from right-wing extremists (Capitol Police a psyops officer aided the effort to storm the building) as it is about the rising of a proletarian consciousness amid growing capitalist crises.

The censorship against anti-imperialist outlets like The Grayzone, Venezuela Analysis, and MintpressNews that Big Tech has carried out in collaboration with the U.S. intelligence community in recent years shows which type of content they’re most concerned with suppressing: content which exposes the lies behind Washington’s foreign policy actions. It’s been crucial that the public hasn’t been made aware of the numerous holes in the 2018 Syria “gas attack” narrative, or the unsubstantiated nature of the claims about “Russian hacking” in the 2016 election, or the hoaxes behind the recent claims about Maduro “stealing” Venezuela’s elections, or the fabricationswhich have went into the narrative that China is committing a “genocide” against the Uyghurs.

The neoconservative think tanks, intelligence officials, and oligarchic corporate censors have met any attempts to reveal the bogus nature of these claims with swift censorship, while the media has worked to paint the anti-imperialist journalists as stooges for Washington’s rivals. This neo-McCarthyism is going to intensify in the coming weeks, months, and years as Biden further escalates the new cold war against Russia and China. There are already hints from Biden’s media team that the next four years will see an intensification of government censorship, and of covert state-created propaganda against the U.S. population.

Why, in the post-2008 crash era, has the country’s ruling class grown so fixated on controlling the flow of information? Because it’s during this era of economic hardship that the seeds for revolutionary action have gained great potential to grow within the minds of the masses. If anti-imperialist journalists are able to expose the State Department’s lies, some people will have the educational tools to come to revolutionary socialism. And if some of these people commit to revolutionary socialism, a myriad of risks will appear for the future stability of the capitalist state.

Is it any wonder that during his 2017 Senate hearing, former FBI agent and pro-censorship fanatic Clint Watts used language which perfectly reflected what I just described? He said that “Civil wars don’t start with gunshots, they start with words. America’s war with itself has already begun. We all must act now on the social media battlefield to quell information rebellions that can quickly lead to violent confrontations and easily transform us into the Divided States of America.” Because of this risk inherent within a free and open internet, concluded Watts, the government must work with Big Tech to “silence” sources of “rebellion.”

His paranoia was entirely valid, because as someone who was radicalized towards Marxism-Leninism after years of reading debunkery of U.S. regime change narratives, I can say that actors like me are indeed created through letting people access information which goes against what the government says. Watts and the censorship-eager figures within the Biden team are engaging in a preemptive counterrevolutionary war. A war which is for now primarily taking place online, where revolutionary sentiments have such great potential to spread.

Therefore, we who’ve already become learned in the deceptions of the imperialist propagandists and the need for proletarian internationalism must preemptively defend against their future censorship moves. What will these moves be? The U.S. Army War College told us five years ago in a report titled “Military Contingencies In Megacities and Sub-Megacities.” It concluded that in a near-future scenario where a class war breaks out in the country and the army has to step in, the open internet will create an environment where:

Adversaries can exploit the almost automatic transparency that it creates — both to show U.S. forces in a bad light and their own actions very positively. Consequently, part of IPB [intelligence preparation for the urban battlefield] prior to any action in a megacity or sub-megacity must be to identify the service providers for both telecommunications and the Internet. It is also important to identify online opinion-makers who could have a major impact in any controversy over U.S. military intervention.

The implication is that these domestic military interventions will have to involve efforts to shut down the internet and cell phone service while trying to ensure that the local media within the occupied zones only puts out official U.S. military propaganda. Another part of the report justifies this by categorizing the online flow of information as a crucial part of modern warfare:

Although cyberspace is sometimes regarded as a fifth operational domain of warfare, it is more. It permeates society, economics, politics, culture, and increasingly, warfare. It is part of the context within which military operations have to be conducted, yet also provides insights into both conditions in a megacity and the adversaries operating there. As one study noted, “megacities function at the intersection of the physical, social and cyber spaces” and, therefore, should be treated as information hubs.

In short, when a class war breaks out in the U.S., the state will try to cut off the impoverished people under its military occupations from all information which conflicts with what the military wants them exposed to. We can stop them from accomplishing this by building hidden alternative communications networks for revolutionaries. Radicals within the country, not exclusive to communists, are already working towards this. This October, the Indigenous Anarchist Federation wrote:

Cell phones and the internet rely on corporate infrastructure and is subject to both government surveillance and service denial. What do we do when social media bans anti-capitalists and anti-colonialists? What do we do when our cell phones fully become monitoring devices we willingly keep by our side, all to the benefit of state intelligence services? What happens when our cell phone numbers are blocked from service?….People forget; no struggle has ever been successful without robust communication networks that are not subject to state control. From the French resistance in WWII to the Zapatistas in the Lacandon Jungle, communications matter!

The rest of their article, which I highly recommend you read, explains what kind of equipment we’ll need to buy in order to build these alternative communications networks. As it elaborates on, for our local groups we should get a series of small, short-range radios like the 5 watt Boafeng UV-5R. For our larger communities of accomplices, we should use these radios to make groups which the Federation says “would have both a radio dedicated for their immediate comrades encrypted communications, and a separate radio tuned to the general band.” Regional resistance networks will require us to make this operation larger; as the Federation says, “HF radio is what will be needed for this to be completely autonomous, but VHF can be used via repeaters, if that is the only affordable option.”

You can look over the Federation’s article for specific instructions on which items to buy given the climate and landscape that you’ll be operating within. Keep in mind that to make these radios work, you’ll need to do some basic programming which makes certain radios able to transmit to certain others. Distribute the shorter-range radios among the people in your local area who you trust, while working with aligned groups in your general region on establishing longer-range radio communications.

In the scenario of domestic warfare that the U.S. military anticipates, we won’t have access to the tools for mass information dissemination and highly convenient long-distance communication which we have now. But if we take all of these steps beforehand, we’ll be able to outsmart the state in its attempts to make us demobilized during what will be the most crucial stage in our class struggle.