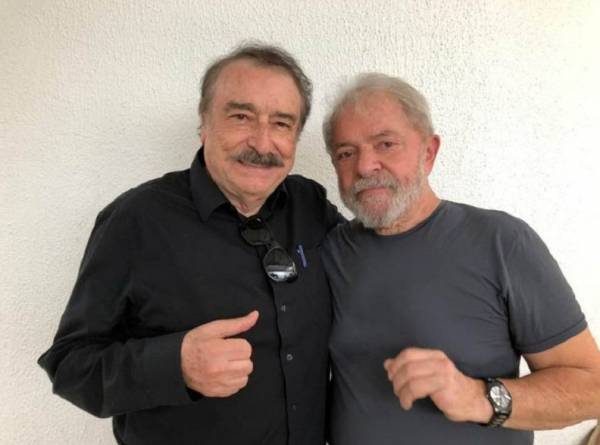 The former president of Brazil, Luiz Inácio Lula da Silva, imprisoned in the city of Curitiba, in the south of the country, is only allowed two visits per week. One hour. On Thursday afternoons, from four to five. We have to wait our turn. And the list of those who want to see him is long… But today, September 12, it’s time for Adolfo Pérez Esquivel, Nobel Peace Prize laureate, and me.

Lula is in prison, serving a sentence of 12 years and 1 month “for passive corruption and money laundering”, but he has not been definitively convicted (he can still appeal) and above all, his accusers have not been able to prove his guilt. It was all a farce. As confirmed by the devastating revelations of “The Intercept”, an online research magazine run by Glenn Greenwald. Lula has been the victim of the most absolute arbitrariness. A totally manipulated legal plot, destined to ruin his popularity and eliminate him from political life and to assassinate him in the media. Thus preventing him from standing and winning the 2018 presidential elections. A sort of ‘preventive coup d’état’…

In addition to being judged in an absolutely arbitrary and indecent manner, Lula has been permanently lynched by the large dominant media groups – particularly O Globo – at the service of the interests of the largest businessmen, with a fierce and revanchist hatred against the best president in Brazil’s history. When his older brother, Genival ‘Vavá’, the most beloved, died, he was not allowed to attend the funeral, despite being a right guaranteed by law. And when his grandson Arthur, 7 years old, the closest, died of meningitis, he was only allowed to go for an hour and a half (!) to the wake… Humiliation, humiliation, miserable revenge…

Visitors are allowed to bring to the prisoner books and letters. We’re not going to see him in a special visiting room but in his own cell where he’s locked up. At the end of a small corridor, on the left, is the door. There is an armed guard sitting in front who opens the door for us. In no way does this resemble a prison – except for the guards – it looks more like an administrative and anonymous office space. The chief jailer, Jorge Chastalo (it is written on his shirt), tall, strong, blond, with blue-green eyes and tattooed forearms, has accompanied us here. A kind and constructive man who has, I see, cordial relations with his prisoner.

The cell-room is rectangular. In the left corner of the back is the single bed. Above the bed, nailed to the wall, are five large color photographs of the recently deceased little Arthur and Lula’s other grandchildren with their parents.

All modest and austere, even Spartan, for a man who was for eight years the president of one of the world’s ten major powers… But everything is very neat, very clean, very organized…

With his usual affection, warm embraces and words of friendship and affection, Lula welcomes us with his characteristic voice, hoarse and powerful. He looks very healthy, robust, and strong: “I walk nine kilometers a day” he tells us. And in excellent psychological condition: “We will wait for better times to be pessimistic,” he says, “I have never been depressive, never, since I was born; and I am not going to be now.”

I give him the two books I have brought to him, the Brazilian editions of “One Hundred Hours with Fidel” and “Hugo Chavez, My First Life”.

We asked him about his state of mind. “Today it is 522 days since I entered this prison on Saturday, April 7, 2017… And yesterday it was exactly one year since I had to make the most difficult decision, to write the letter in which I resigned to be a candidate in the presidential elections of 2018… I was in this cell, alone… doubting… because I realized that I was giving in to what my adversaries wanted…. to prevent me from being a candidate… It was a hard moment… one of the hardest… and I was completely alone here… I thought: It’s like giving birth with a lot of pain and without anyone to hold your hand… “…

He opens the book “One Hundred Hours with Fidel” and says to me: “I met Fidel in 1985, exactly in mid-July 1985… I was in Havana for the first time participating in the Trade Union Conference of Latin American and Caribbean Workers on External Debt… I had already left the CUT, I was no longer a trade unionist, I was a full-time General Secretary of the PT and a candidate in the legislative elections of the following year… But there were not only trade unionists in that Conference, Fidel had also invited intellectuals, professors, economists, and political leaders… I remember that it was already about five o’clock in the afternoon, he presided over the conference and it was very boring… Then Fidel, whom I did not know personally, sent me a message asking if I was going to speak… I replied that no, that I had not planned to.. He then almost gave me an order: “But the CUT didn’t want me to take the floor in any way… So I didn’t know what to do… At about seven o’clock in the afternoon, and surprisingly, Fidel announces that I have the floor… I was almost forced to take it, I got up, went to the podium… and began to speak… without translation… I made a long speech and ended up saying…: “Comrade Fidel, I want to tell the friends gathered here that the United States is trying by all means to convince us that they are invincible… But Cuba has defeated them, Vietnam has defeated them, Nicaragua has defeated them, and El Salvador is also going to defeat them… We must not be afraid of them! “ There was loud applause. Well, the day ends, and I go to my assigned house in Laguito… And when I arrived… who was waiting for me in the little living room of the house? Fidel and Raúl! The two of them sitting there waiting for me… Fidel began to ask me where I had learned to speak like that… I told them about my life… And that’s how we became friends forever.”

“I must say, adds Lula, that Fidel was always very respectful, never gave me unrealistic advice… He never asked me to do crazy things… Prudent… Moderate… A wise man… A genius…”

I ask him how he judges these first eight months of Jair Bolsonaro’s rule.” Bolsonaro is handing over the country,” he replies. And I am convinced that everything that is happening is being piloted by Petrobras… Because of the super-extension of offshore Pre-Sal oil, the largest in the world, with fabulous reserves, of very high quality… discovered in 2006 in our territorial waters… although it is at great depth, more than six thousand meters, I can even say that the reactivation of the 4th Fleet, by Washington, which patrols along the Atlantic coasts of South America, was decided when the Pre-Salt deposit was discovered… That is why we, along with Argentina, Venezuela, Uruguay, Ecuador, Bolivia, etc… created the Security Council of UNASUR… It was a determining element.

“Brazil,” continues Lula, “has always been a country dominated by elites who voluntarily submitted to the United States… It was only when we came to power in 2003 that Brazil began to play a leading role… We joined the G-20, founded the BRICS (with Russia, India, China and South Africa), organized – for the first time in an emerging country – the Olympic Games, the World Cup… Never was there so much regional integration in Latin America…. For example, our exchanges within Mercosur were started with 15 billion dollars, when I finished my two mandates they rose to 50 billion… Even with Argentina, when I arrived they were 7 billion, when I finished 35 billion… The United States does not want us to be the protagonist. It did not want us to have economic, financial, political and industrial sovereignty, and even less a military… They do not want, for example, Brazil to sign agreements with France on nuclear submarines… We had made progress on that, with President François Hollande, but with Bolsonaro it all collapsed… Even that miserable declaration, so frighteningly anti-feminist, against Monique, the wife of French President Emmanuel Macron, must be placed in that context…

The time of the visit is ending. We talked about many of his friends who still have high-level political responsibilities in various countries or in international organizations. He asks us to convey his most affectionate greetings to each and every one of them, and thanks them for their solidarity.

He insists on the following: “Say that I am well, as you can see. I am aware of why I am in prison. I know that very well. I am not unaware of the number of lawsuits against me. I don’t think they will release me. If the Supreme Court finds me innocent, there are already other trials going on against me so that I will never leave here. They don’t want me free, they don’t want to take any risk… That doesn’t scare me… I’m prepared to be patient… And as far as I’m concerned, I’m lucky… a hundred years ago, I would have been hanged, shot or quartered… to make me forget any moment of rebellion… I’m aware of my role… I’m not going to abdicate… I know my responsibility before the Brazilian people… I’m in jail, but I don’t complain, I feel freer than millions of Brazilians who don’t eat, don’t work, don’t have a home… it seems that they are free but they are prisoners of their social condition, from which they can’t get out…”

I prefer to be here being innocent, than outside being guilty. To all those who believe in my innocence, I say: Do not defend me only with blind faith… Read the revelations of the “Intercept”. Everything is there, argued, tested, and demonstrated. Defend me with arguments… Elaborate a narrative, a story… Whoever does not elaborate a narrative, in today’s world, loses the war.

I am convinced that the judges and prosecutors who set up the manipulation to imprison me do not sleep with the calm that I have. They do not have a clear conscience. I am innocent. But I don’t just sit back and do nothing. What matters is the struggle.”

for the complete interview in Spanish go to: Cubadebate