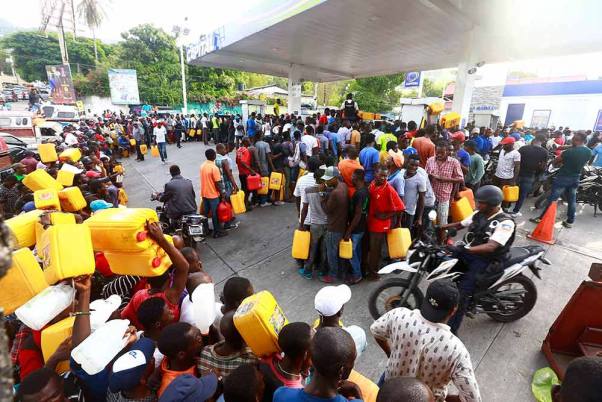 Haiti is heating up again due to claims of institutionalized corruption, nonstop combustible shortages and rumors of a possible increase in fuel prices which would directly impact the costs of transportation and food. Members of parliament and social movements opposed to the Government believe a measure of this kind would be a real attack against the poor majorities who are surviving on less than two dollars per day, said representatives of the Patriotic Forum for a National Agreement against the Crisis in a recent meeting in the rural town of Papaye, central Haiti, with the presence of over 250 leaders from all over the country. This is the reason that several organizations and political parties are calling on the population to go out to the streets again to demand the end of the economic crisis and the immediate resignation of President Jovenel Moise.

The Government’s latest attempt to increase oil prices, under the dictates of the International Monetary Fund, ended up in July 2018 with 1.5 million people on the streets, including a general strike that brought the country to a standstill, forcing the suspension of the unpopular measure, and the resignation of former Prime Minister Jack Guy Lafontant. The lack of fuel is a direct consequence of the embargo imposed on Venezuela by the United States, which is prohibiting the entry of subsidized oil provided to Haiti through the Petrocaribe agreement that gives Haiti preferential payment. In this connection Haiti, through the BMPAD (Bureau of Monetization of Development Aid Programs, for its French acronym) is obliged to purchase oil from U.S. companies at highly unfavorable market conditions and it is not capable of paying its debts to importers.

In a country with no production of hydrocarbons of its own but with moderate consumption, the situation has a self-repeating pattern that goes like this: general shortage; smuggling; doubled or tripled gas or diesel price increases; partially paralyzed transportation; etc. Several filling stations which had multiplied in the country, not because they were profitable but because they were a cover-up to launder the proceeds of drug trafficking as Haiti is a transit zone, are now closed. Motorcycle taxi drivers now have to push their vehicles up through the hills and when a rumor spreads about an upcoming supply in a specific fuel station, they gather by hundreds and struggle for the scarce available liters of gas. Nowadays, nobody goes out without their iconic yellow plastic containers, being compared by many as a symbol of struggle similar to the yellow vests used by French protestors. The now scarce “tap tap” —small pick-up trucks that represent the country’s most popular transportation— move about with exceeded passenger capacity.

RELATED CONTENT: “Down with the Rebels Against the Bill of Sale!”: Guy Endore’s radical reimagining of Haiti and revolution

The long national highway, route number one, which links the capital Port au Prince with the city of Gonaives, has taken on a strange look these days. Though there have been oil shortages for weeks, “Madam Saras” continue their daily routine. These market women accumulate, move, and distribute domestic produce in Haiti. They connect agricultural products of the beaten rural areas to the needs of the large urban centers. Particularly, to the capital city Port au Prince, a megalopolis of three million of inhabitants. These hard-working women load trucks with plantain, rice, beans, corn, fruits, and other basic staples, and then settle in on the top of the huge packages, in the smallest place available. The old trucks consume their last gallons of gas in their attempt to reach the city. One by one, they are going to die in the closest fuel station, waiting for the precious liquid to be brought to the stations. Throughout all the highways, every fuel station becomes a large camping area surrounded by dozens of trucks with the Madam Saras and their children sleeping over mats or directly on the pavement, in nearby land, or in the shade of large trailers.

Meanwhile, spontaneous demonstrations including blocked roads with stones and burning tires of the discontented. Behind every obstacle, tap taps and motorcycles gather to undertake a difficult transfer barricade by barricade. Traveling 25 or 50 kilometers becomes an odyssey that may last hours. For the Madam Sarda, in turn, a part-time journey may be delayed for days or even weeks. Besides the metropolitan region, total roadblocks have been reported in the town of Arcahaie in the Artibonite region, in the central region of Mirebalis, in Cabo Haitiano in the north, and in several areas in the south of the country. During the last few days, government, commercial and school activities have been reduced to the minimum, and it is expected a total standstill will be coming in the days ahead.

But this serious drama being lived in the Caribbean nation also has a political dimension to it. In this context, in parallel to the economic crisis, the crisis of legitimacy has worsened. The Jovenel Moise Administration and the PHTK party are trying to impose a new prime minister, Fritz William Michel, following the brief time in office of Jean Henry Ceant and Jean-Michel Lapin. Both of these insignificant figures were mere devices that unsuccessfully tried to contain the crisis, and extend a bit the survival rate of the acting President. Michel, the new candidate, worked as chief accountant for the Ministry of Economy and Finances between 2009 and 2011.

Though Michel was announced as a candidate for prime minister last July 22, the Haitian Constitution clearly stipulates that the President can propose a candidate but the Parliament must approve or reject him. His ratification by the Deputies was filled with accusations of corruption by Senator Sorel Jacin who claimed that the favorable vote of several lawmakers had been bribed by the ruling party for $500,000. The truth is that he could not be ratified by the Senate as several senators and demonstrators crowded the chamber. Michel however is serving the functions of the Prime Minister anyway contravening the national Constitution. Making matters worse, Michel has been implicated in a new corruption scandal involving the local political class, concerning overpriced sales to the State by an agricultural company in his name.

The Jovenel Moise Administration already counts as its opposition the peasants, trade unions, crowded towns in the suburbs, the commercial bourgeoisie gathered in the Private Economic Forum, and part of the traditional political class. Only a fraction of the oligarchy and the unrestricted support of the United States, which has not said anything about the last death rattle of the crisis, seem to be maintaining him in power. Nevertheless, the simultaneous worsening of the political and economic crisis leads one to think that a new cycle of mass actions could take place, which every time are more radical and more and more unified under the demand of resignation and the demand of a political transition that allows the rebuilding of the country. 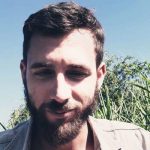