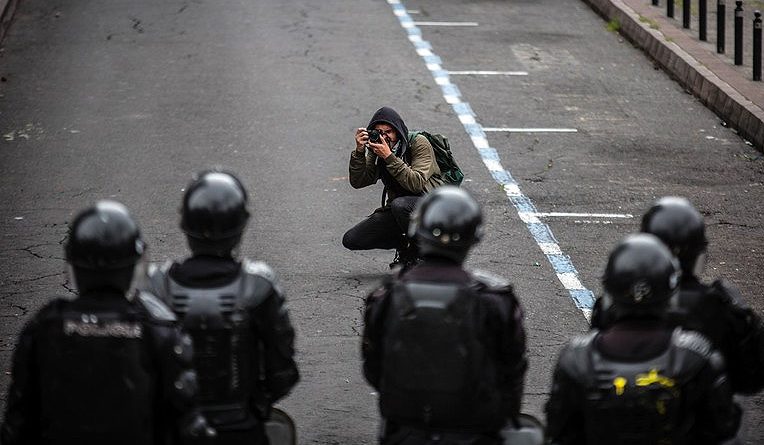 There is virtually no coverage of the massive resistance to Moreno in Ecuador in the corporate media in the US. We know all too well how the coverage would be if this was say Venezuela or Bolivia. -editorial

The social upheaval underway in Ecuador has been given curious and selected media coverage. The magnitude of the events have surprised many while the major media has focused on rioting or damage caused in the streets they have ignored the police repression and, above all, they are giving no space to inform about the social demands being raised by the population or the strengthening of the ties of the Lenin Moreno Administration with Washington and the International Monetary Fund (IMF).

As a matter of fact, the singular performance of journalists in some news channels such as Ecuador TV —openly pro-government— went viral on social media. In one example a reporter can be seen defending the role played by security forces but she then cuts off an interview with a citizen when he comments about his reasons to be protesting against the Government.

Teleamazonas, one of the most followed media in the Ecuador, was the channel chosen by the President to offer an interview last Tuesday. The same day in their social media they gave extensive coverage to a “vandalized” bicycle rack. According to them, that was one of the outstanding moments amidst the conflict that is keeping the whole region in turmoil.

On the day of the transportation strike day, Teleamazonas also took it upon themselves to release the names and personal data of the union leaders who announced the strike leading to some of them to be arrested.

In turn, digital media outlets like El Comercio, Ecuavisa, and El Universo highlighted the “millionaire losses” caused by the protests and their respective strikes in strategic areas of the country, such as industry and tourism.

On the contrary, some alternative and community media have been focusing on the performance of police officers and their excessive use of force. For instance, the Confederation of Indigenous Nationalities of Ecuador (known as CONAIE, an umbrella of native communities) has been posting in their social media some videos of large mobilizations, together with the repressive response of the police.

Days ago, the Inter-American Commission on Human Rights (IACHR) expressed its concern on the “excessive use of force by the Police,” though it was not quite echoed in the local media. They also highlighted that some journalists were injured while doing their job.

The United Nations did the same, noting that the rights suspended by Moreno’s decree represent “very important liberties” according to public statements given by the Vice-Chair of the Committee on Economic, Social and Cultural Rights, Mike Mancisidor.

It was the indigenous confederation that broke the news of the arrival of 50,000 Indigenous demonstrators who arrived in Quito from several areas of the country.

Even though the President did not explain it he is taking full advantage of his power through the state of emergency decree to “order prior censorship in the information released by the media” as long as it is related to the issue that led to the emergency, according to article 165 of the Ecuadorian Constitution.

In this context, police forces raided public radio station Pichincha Universal last October 8 at the orders of the Attorney General. They claimed the station had committed the crime of “stirring hatred among citizens.” This radio station usually issues comments questioning the current Administration, even though they interviewed several of its officials. Last Thursday, authorities demanded the “immediate suspension” of its broadcasting.

Also, Moreno increased the limitation of freedom of expression through decree number 888 and added that the Secretary General of Communications shall develop a mechanism to have “obligatorily broadcast” any messages issued by the President and other officials.

Political communications expert Amauri Chamorro commented that “the media was already distorting information prior to the unrest.” He added that “Ecuadorean private media companies were always working under a self-censorship and were not publishing real information.”

Concerning the recent events, Chamorro underlined that “the state of emergency made the public institutions, such as hospitals, the morgue or the Police, are not obliged to give official information about what is going on. Essentially they are preventing the international and national media to have access to real information to know the real size of the march.”

In turn, sociologist David Chavez noted, “One of the saddest and embarrassing chapters of the crisis we are living in is the terrible role played by the media in Ecuador. But this is not new.” According to him, “one of the most important allies” of the President has been the media “in the midst of his political shift to ally with the Right, powerful groups and economic elites.”

Professor at Ecuador’s Central University, Chavez commented that, “there is a media siege regarding the Government, they actually seem like propaganda machines.” In this way, he stated that “the media are co-responsible for the crisis.” Many of them were “openly political opponents to the Correa Administration and they have now turned pro-Government,” he added.

Furthermore, Chavez noted that “in order to have proper information, you have to look for alternative, communal, digital and foreign media” because “this is the only possibility. These small channels are the most effective and are critically important .Through what they are witnessing in the streets they have radicalized their perspective” he stressed.

What is going on in the streets?

Large protests have spread through Ecuador for a week since the Moreno Administration announced its severe economic measures and a package of labor and tax reforms. Thousands of people turned to the streets as they linked such measures to the debt of the current Administration with the International Monetary Fund.

The steps taken by the Executive, called “neoliberal package” by his opponents, include two aspects that aroused controversy:

Eliminating fuel subsidies in force for the last 40 years. Thus, oil prices increased from $1.85 to $2.38 per gallon, while diesel increased by 123 percent. The impact of the measures in the rest of the economy has not been assessed yet, considering the transportation of staples such as food.

The transport unions launched a strike on October 3, when the decree came into force, but it was lifted the following day. However, the mobilizations were joined by the Confederation of Indigenous Nationalities of Ecuador (CONAIE) together with students and opponents to the measure in general.

The Government responded by announcing the state of emergency the same day that protests started, calling on certain legalities pertaining to “serious domestic commotion” in article 164 of the Constitution. About 30,000 soldiers were deployed to hold the protests back, especially in Quito. The right to freedom of assembly was suspended, among other restrictions to be in affect, initially for 60 days but was reduced to 30 by the Constitutional Court.

As of this writing 714 people have been arrested during the this period of civic unrest according to Interior Minister Maria Paula Romo and seven civilians have died under circumstances that are still to be clarified.

Following days of confrontations among demonstrators and security forces, a strike was carried out by indigenous communities last Wednesday and thousands of people walked peacefully towards the historic downtown of the capital city. How will this be reported to the Ecuadorean society?