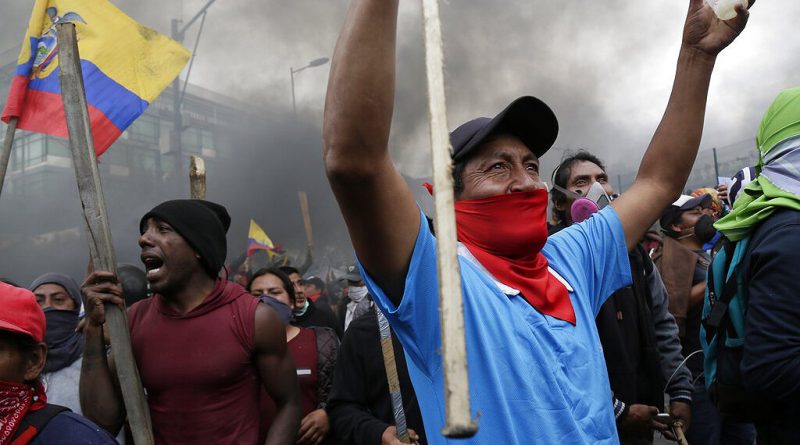 The imminence of greater misery and famine, such as those imposed by Macri on millions of Argentines, provided an example for the great indigenous and popular rebellion in Ecuador against the cruel package decreed by Lenín Moreno at the beginning of October. The decree is made up of draconian measures dictated by the International Monetary Fund (IMF) in exchange for granting the country a loan of 4.2 billion dollars. Curiously, Moreno previously forgave fines and interest to the large economic groups to the tune of more than 4.5 billion dollars, which decapitalized the state and led to an increase in unemployment, poverty and extreme poverty. In other words, the IMF loan is equivalent to the amount of the cancellation of fiscal obligations to the multimillionaires and, added to that measure; it implies pushing the country into an even more desperate situation than that already experienced by large sectors of the Ecuadorian population.

In exchange for the loan, the IMF demands an increase in Aggregated Value Taxes, the liberation of the price of fuel, the privatization of strategic sectors, labor reform, the modification of the statute of the Central Bank and harsh measures to balance public accounts, including the dismissal of 23,000 public workers, in addition to tens of thousands who had already suffered the same fate. Moreno seems to forget that another agreement with the IMF of President Lucio Gutiérrez in 2003 was the main reason why a popular uprising forced him to leave office without finishing his mandate. It was precisely from there that the favorable climate was created for the outbreak of the rebellion of the outlaws, the arrival of Rafael Correa as president in 2007 with a copious vote and the beginning of a decade of unprecedented progressive economic, social, political and cultural advances in the country.

Now the spark that ignited the prairie was the sudden increase in the price of fuel and, almost immediately, of public transport, once the authorities reached agreements with the leaders of the transporters to defuse the general strike they had set in motion. But then the government, which imagined it had controlled the situation, stumbled upon the outbreak of an indigenous mobilization in the Sierra and the Amazon coinciding with popular protests by workers, students and women in all the cities of the country, which had their climax in the general strike called for October 9 by the Confederation of Indigenous Nationalities of Ecuador (CONAIE).

Moreno, unconstitutionally, decreed a state of exception for 60 days and, under his protection, militarized the country, established a curfew in various places and sectors, used violence, even against the expression of ideas other than neoliberal ones, which explains the censorship and persecution of journalists and media, as in the case of Universal Pichincha radio.

It is easy to understand the detonating indignation of the current protests, since the dismantling of almost all the programs, economic, social rights and democratic liberties established by President Correa now adds up to a tremendous increase in the price of fuel. Diesel rose from 1.03 to 2.30 dollars and the extra gasoline from 1.85 to 2.39 dollars, which will lead to an unbearable increase in the price of the basic food and public services. The situation is reminiscent of the Caracazo (1989) and the wild increase in fuel and public transport that caused it to explode.

The barbaric repression has been denounced with alarm by several UN bodies, human rights organizations and the Network in Defense of Humanity. On the 8th in Quito, in violation of all international protocols and norms and the Ecuadorian Constitution itself, in addition to the massive use of tear gas and fierce violence against demonstrators, real fire was used, including against a hospital in the center of the capital where they were taking refuge. There are hundreds of prisoners, dozens of wounded and seven people killed, a return to the worst neoliberal style of the 1990s by the government that everyone already describes as the worst the country has ever had. The political persecution and incitement to hatred reaches the point where Moreno himself accuses without proof former President Correa, Ricardo Patiño, Virgilio Hernández and Paola Pavón, leaders of the Movimiento Revolución Ciudadana, of trying to destabilize his government. The situation has reached an impasse in which Moreno refuses to withdraw the package, a condition set by CONAIE to initiate a dialogue. Meanwhile Correa challenges him to call elections.

There is nothing viler than a traitor like Moreno, who after being a militant in the Citizens Revolution, having been vice-president with Correa and elected to the presidency thanks to his support, and then the next day knelt before the United States and the local oligarchy. Later it became known that, unlike his former comrades, he is a corrupt. He probably allowed himself to be blackmailed by the CIA. Just a real piece of human waste.