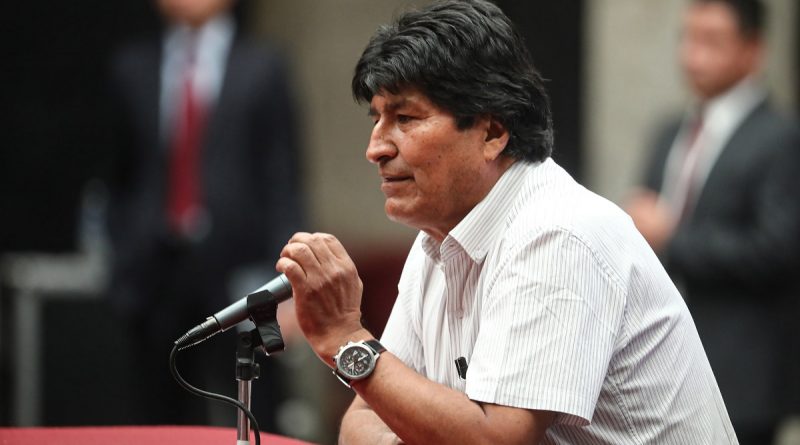 Mainstream commentators continue to assert that Evo Morales oversaw a fraudulent election in Bolivia that led to his resignation. But the “resignation” was a coup — and there’s still no proof the election was even fraudulent.

On November 10, Bolivian president Evo Morales was ousted in a military coup. Increasingly violent protests calling for Morales’s departure had rocked the country for three weeks, following contested presidential elections. Police forces of major cities declared themselves in mutiny, leading to even greater chaos. Finally, the military high command insisted that Morales resign. He did so and then, facing threats to his life, fled to Mexico, where the government of Andrés Manuel Lopéz Obrador offered him asylum.

The Washington-based Organization of American States (OAS) — whose motto is “democracy for peace, security, and development” — played no small role in sparking the chain of events that rapidly led to Morales’s toppling.

But, first, a little background.

In 2017, Bolivia’s elected Plurinational Constitutional Tribunal ruled that term limits were unconstitutional, paving the way for Morales to run for reelection despite having narrowly lost a 2016 referendum on the subject. The OAS secretary general, Luis Almagro, declared earlier this year that “[t]o say that Evo Morales can’t participate is absolutely discriminatory considering other presidents who have taken part in electoral processes on the grounds of a court ruling.” Since the OAS often serves as an election observer, Almagro’s comments were widely seen as endorsing the legality of Morales’s reelection bid. This was much to the dismay of opposition lawmakers and others opposed to the abolition of term limits who tried to lobby the Trump administration to oppose Morales’s reelection run.

RELATED CONTENT: The Two Phases of the Destabilizing Offensive Against Evo Morales

It was with Almagro’s validation that Morales’s Movement for Socialism (MAS) party approached the country’s October 20 general election, and invited the OAS — which had shaped the design of Bolivia’s electoral system — to observe it. The election would feature two methods for counting votes: a quick count and an official count. The quick count, or TREP (Transmisión de Resultados Electorales Preliminares), provides preliminary, non-legally binding results on election night. The OAS has recommended or helped implement these types of systems in several Latin American countries, including Bolivia, which has used a quick count in several previous elections.

On election night, the Bolivian electoral authorities held a press conference to report the preliminary results from that quick count, which covered 83.9 percent of the vote tally sheets. Morales, they announced, was in the lead with 45.7 percent to Carlos Mesa’s 37.8 percent. Given that Bolivian law stipulates the front-runner must have at least 40 percent of the vote and a ten-point lead against the runner-up in order to declare victory, these results suggested the election would go to a second round, where many believed Mesa had a chance of winning. At this point, the electoral authorities stopped reporting the results of the quick count — a decision that was consistent with what they had done in the past and what they had announced they would do this time.

RELATED CONTENT: Race is Central to Both Revolution and Reaction in Latin America

But with the final outcome still unclear, the opposition and the OAS electoral mission in Bolivia expressed alarm and demanded that the quick count be restarted. The next day, the electoral authorities released quick count results with 95.7 percent of the vote tally sheets counted. These showed Morales winning by slightly more than 10 percentage points, 46.9 percent to Mesa’s 36.7 percent. Breaking with protocol, the OAS then put out a communiqué expressing “surprise” and “concern” regarding this “drastic” and “inexplicable change in trend.” To many outside observers, starting with opposition leaders, the OAS’s statement suggested that fraud had taken place. And so the fraud narrative was established, fueling opposition protests in the streets of La Paz and other big cities.

When the results from the official count — the only legally binding results, which were regularly and publicly updated online — came out a few days later, showing a first-round Morales victory, few were paying attention, or even seemed to realize that the official results were something other than the quick count results.

Perhaps even more importantly: was the “inexplicable change in trend” in the quick count really inexplicable? It doesn’t appear so. An analysis of the OAS’s claims by the Center for Economic and Policy Research, the Washington-based think tank for which I work, shows that the results released at 95.7 percent were consistent with the trend in tallies at 83.9 percent. As in prior elections, areas that overwhelmingly favored Morales were simply counted later than those favoring his opponents. After accounting for geography, there was no significant “change in trend.” Simply put, the OAS had misrepresented the results and the quick count process. More disturbingly, the OAS had cemented its place as a political actor in the crisis instead of an impartial observer. The opposition, already in the streets, was emboldened.

Morales, still with a plurality of support either way, indicated he wanted to see a prompt and peaceful resolution to the crisis. Although acknowledging that Bolivian law was the only applicable authority on the election, he nevertheless agreed to a binding OAS audit of the results, perhaps believing it would confirm his win. Curiously, after initially supporting the audit, Mesa declined to agree to the OAS’s terms.

On November 10, the OAS issued its preliminary audit report. It relied heavily on identifying technical vulnerabilities and process concerns for both the quick and official counts, much of which was in a technical report from a security consultant that the electoral authorities had hired. However, it failed to prove that these vulnerabilities and failures, although serious, were exploited for fraudulent purposes or that they may have had a significant impact on the outcome of the election. (And with election systems around the world facing the same challenges, it is hard to understand how these concerns are unique or warrant throwing out the election.) The OAS auditors also doubled down on its charge that there had been an “inexplicable” change in the quick count results, which formed the basis for so many cries of fraud directly after the election.

The OAS audit concluded that the elections should be held again, which Morales, given his commitment, agreed to. But it was too late. With the audit results in hand, MAS party legislators and their families were threatened, and the military “suggested” that Morales resign. He did, and sought asylum in Mexico.

It’s unclear what will happen next. The United States and Brazil (along with many mainstream commentators) have endorsed the right-wing coup and recognized the hastily installed right-wing, anti-indigenous opposition senator Jeanine Áñez as president. Áñez says Morales will be barred from the next election and charged with crimes if he returns to the country. And as “interim” president, she has already radically changed Bolivia’s foreign policy. These actions almost certainly violate the Bolivian constitution. Members of the MAS party convened the legislature as well, and currently, many anti-coup protesters are in the streets — although unlike with the anti-Morales protests of the previous week, these protesters face violent repression.

What is certain is that at every critical junction since the election, various organs of the OAS have played an enormous role in driving the crisis that led to Morales’s ouster. Almagro validated the coup by refusing to characterize it as such and even suggested that Morales’s supposed fraud in the October 20 elections — still unproven — was the real coup.

Bolivia is more the rule than the exception in this respect. The OAS has a sordid history in Haiti, where it set the stage for the country’s 2004 coup and overturned the results of the 2010 election. In recent years, Almagro was expelled from the left-wing Frente Amplio coalition in Uruguay for advocating interventionism in Latin America — including recognizing the US-backed Guaidó government as the legitimate government of Venezuela, sanctioning the stolen elections that brought Juan Orlando Hernández to power in Honduras, and standing by while Dilma Rousseff was ousted in Brazil. In recent years and in the past, the OAS’s power has mostly been used in one direction: against the Left.

So too now with Bolivia. The first indigenous president in the country’s history, a socialist with a remarkable record of slashing poverty, has been toppled following an election that the OAS denounced as fraudulent — even though the OAS still can’t furnish conclusive proof of that fraud.