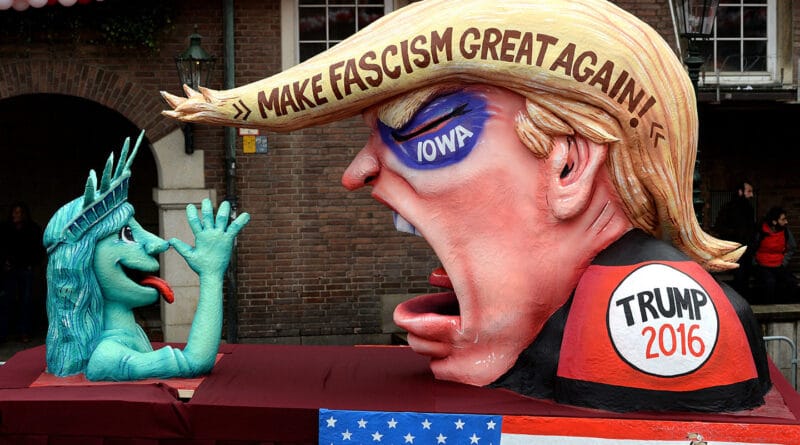 The absolute height of fascism talk in recent US history took place at the beginning of June, in the aftermath of George Floyd’s killing. It occurred amid America’s largest-ever popular mobilization against white supremacy and racist police violence. Allegations of fascism inadvertently testified to the possibility of change; it had been generations since so many people demanded an end to American state brutality. Those same charges of fascism, however, provided no help in effecting that transformation.

It is undeniable that Donald Trump’s presidency gave the notion of fascism cultural prominence in American politics. In the last 15 years, the term had entered public discourse only three times before this past summer: when Trump’s candidacy broke through among Republicans in March 2016; after he beat Hillary Clinton and took office in January 2017; and when the disgusting Unite the Right rally was held in Charlottesville, Va., in August of the same year.

This shows that nothing Trump actually did sparked the discourse—unless one counts the rhetorical fuel he added to the fire of outrage and violence set off in Virginia by several hundred punks. The fascism frame was a choice that activists, commentators, and politicians made, and June 2020 proved it again and conclusively. No comparable talk—especially about Barack Obama—happened in response to the police slaying of Michael Brown on the streets of Ferguson, Mo., in August 2014. So the real questions are: Why did we make that choice? And are there better ones now?

Asking them is not to deny that America experienced a kind of fascism during the Jim Crow era, that fascism in one of its varieties across the world could return, that America could host it, or even that fascism is latent so long as injustice lasts. All true, but so what? To insist on hypothetical possibilities or eternal fascism is to dodge the obligation to provide a responsible inquiry into contemporary American politics. Instead, most people who have denounced fascism over the last four years wish to return to the status quo ante Trump and restore the failed policies that provided him the opportunity to win the White House.

A factual approach to the Trump years shows that those crying “fascism” tended to rely on the first half of every frightening news cycle. But the second half showed Trump shying away from any fascist endgame, changing his mind under pressure, or finding himself blocked by his own servants. And that was before any heavier weaponry in the American system came into play.

I am more sympathetic to the claim that fascist elements in civil society became emboldened with Trump in charge. But racist militias are anything but new, and the white boys of Charlottesville and the Proud Boys hardly constitute a fascist uprising. (In the March on Rome, Benito Mussolini had tens of thousands of Blackshirts at his command, while in 1933, Adolf Hitler had personal goons in the millions.) The disgusting events of January 6, 2021 illustrate frightening new potentialities for the future, while also reinforcing the end of this presidency—assuming it even lasts until January 20. Indeed, the culmination (so far) of Trump’s parodic coup staged by “a mob of angry white dudes”—as Keeanga-Yamahtta Taylor put it—led the inevitable outcome of Joe Biden’s installment to be even swifter and more widely supported.

We need theories that capture both the Trump years’ continuity with the past as well as their novelty. But the allegations of fascism too often distract us from the need and possibility for America to diverge from the trajectory that led to them.

The Trump administration’s most serious evils were either rhetorical and symbolic, or came in adjusting the already obscene American immigration regime in an even more exclusionary direction. Trump’s national security record, based on that same unchecked executive power, is more mixed. Under Trump, America killed fewer foreigners overall than it did when his two predecessors were in office. Even as he extended some of their worst choices and made grievous new mistakes, there was no resemblance to the hyper-imperialism of historical fascism.

None of this is to say that Trump wasn’t a terrible president, let alone that “the system” worked. Just the opposite: The same system that often rendered Trump harmless continues to fail most Americans. The most graphic proof of this lies in the latest election returns, which embarrass the fascism paradigm. The most shocking thing about them is that, after four years of delegitimation, Trump increased his support among the presumed victims of fascism, while the Democratic Party faltered. Biden broke through, thanks to the wealthy and powerful. The state where I live, Connecticut, is among the most unequal, with some of the country’s worst poverty. Biden fared worse among urban workers, including Blacks and Hispanics in my city of New Haven, than earlier Democrats—but far, far better among the wealthy denizens of Greenwich and Westport.

If we are lucky, the fascism debate will become a historical curio, allowing Americans who want to overcome structural injustice and political impasse to focus where it matters. Far from reflecting any real intellectual dilemma, it marks a missed opportunity. It also poses a risk for a future in which too many progressives spend their time fretting about the end of American democracy, allowing the mainstream to shirk responsibility for its enduring flaws and the right to keep on fooling too many of its longtime victims.

Samuel Moyn teaches law and history at Yale. His most recent book is Not Enough: Human Rights in an Unequal World (Harvard University Press).(The Nation)