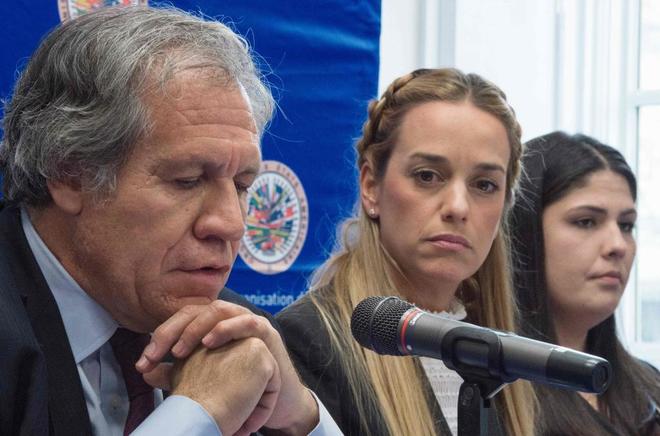 Luis Almagro, Secretary General of the Organization of American States (OAS), the organization that, under his command, promoted and carried out the coup against President Evo Morales in Bolivia, paving the way for the civic-military dictatorship headed by Jeanine Áñez responsible for crimes against humanity and various crimes of corruption, intends to sweep its accountability under the rug and direct its malice towards Venezuela.

As if nothing has happened in Bolivia, where the OAS had a clear role in promoting the coup against Evo Morales under false fraud allegations, confirmed by the landslide victory of Luis Arce, the OAS held its so-called Assembly on Monday with the foreign affairs ministers of the organization based in the US capital, Washington DC, resuming their anti-Venezuela campaign via videoconference.

The far-right coup the OAS supported in Bolivia failed, so now its coup-mongering chief Luis Almagro is going back to trying to overthrow the democratically elected government in Venezuelahttps://t.co/ANyiN4OdJj https://t.co/pQVYee1nTa

RELATED CONTENT: This is What Happened to Patricia Arce – Mayor Harassed by Fascist and Misogynist Mob in Bolivia’s 2019 Coup

“We must recover democracy in Venezuela. It is a criminal regime that affects regional stability by generating humanitarian crisis, migratory crisis, supports terrorism and drug trafficking and commits crimes against humanity,| Almagro stressed as part of his new attack against Venezuela, as usual, and as he did with Bolivia, without presenting any evidence to corroborate his statements.

“They have identified that crimes against humanity are perpetrated in Venezuela, this is happening today, atrocities occur without the international community acting to protect Venezuelans,” Almagro added. Using the denounced  UN “independent” report promoted by the Lima Group and the US government to undermine the work that Venezuelan government has been doing with the Office of the UN High Commissioner on Human Rights (OHCHR), Michelle Bachelet, work that has been praised by Bachelet herself.

"Keep your 'congratulations' to yourself. The time will come when you're brought to justice for your interventions in Honduras, Venezuela and Bolivia." 🇧🇴🇻🇪🇭🇳 https://t.co/chWFswmhvm

According to Almagro, the President of the Republic, Nicolás Maduro, represents “a threat” and therefore “must be a crucial element of the analysis and solution that we should considering for Venezuela,” in a renewed attack against Venezuela’s legitimate institutions, following the script written for him by the US Department of State.

We are overjoyed that democracy and justice have prevailed in Bolivia. But we aren't done fighting. Now, we call for @Almagro_OEA2015 to resign from the OAS to atone for the organization's role in the violent coup that displaced Evo Morales.

“Keep your ‘congratulations’ to yourself,” wrote Evaliz Morales Alvarado wrote. “The time will come when you’re brought to justice for your interventions in Honduras, Venezuela and Bolivia,” referring to Luis Almagro. US journalist Ben Norton added “the far-right coup the OAS supported in Bolivia failed, so now its coup-mongering chief Luis Almagro is going back to trying to overthrow the democratically elected government in Venezuela,” al these in reference to Almagro’s impudence.

Today, world renowned anti-war feminist organization Code Pink announced the launch of a campaign demanding the resignation of one of the worst OAS’ secretary generals in history, Luis Almagro, for the damage he has caused in several countries in his capacity as lap dog of the US empire.