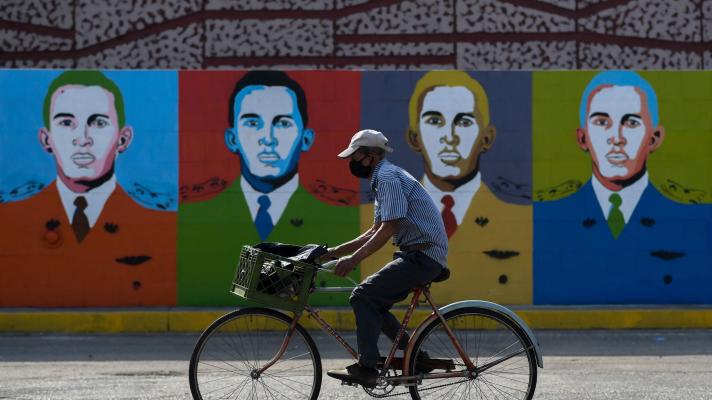 Thus, regarding the result of this election, it is important to specify some key points.

1. The Preceding Inertia
In strictly mathematical terms, by combining the opposition votes of Freddy Superlano and Rafael Rosales, the November 21 elections left an electoral asymmetry of 66% of the vote count against Chavismo.

In the January 9 election, this asymmetry went in favor of Sergio Garrido, who managed to add up the votes of the opposition candidates in the earlier election in his favor.

In just one month of campaigning, Arreaza managed to maintain and even increase the Chavismo core vote, going from 103,693 votes (37.2%) in November to 128,583 votes (41.2%) in January. It is evident that the result was not enough to give the Chavista candidate a victory, but in statistical terms, support for his candidacy grew exponentially.

In strictly electoral terms, Garrido’s victory was largely due to a previously existing inertia in Barinas which could not be reversed by Arreaza’s campaign and which, furthermore, was not just due to electoral factors, for it was a manifestation of other inertias already existing in the state.

2. Chavismo’s political setbacks in Barinas
Until recently, Barinas was a state with a great particularity. It was the only state in Venezuela that had been continuously governed by relatives of Commander Hugo Chávez. This created an internal political climate that is very different from that of the rest of the country.

Different subjective realities were thus formed in Barinas which sustained a sensation of “perpetuity” and “immovability” when it came to the Chavista leadership, partly brought about by an overconfidence in the traditionally Chavista electorate. Political networks were also created around the local leaders through the implementation of a sort of political caste system.

Thus, relationships of patronage based on a false belief in an unmovable political “eternity” prevailed. This situation, as a whole, generated a sustained and prolonged deterioration of the political fabric in the state and in the management and handling of public affairs.

This became accelerated during Argenis Chávez’s term in office, and created an extremely adverse political inertia that Chavismo was unable to reverse at the January 9 polls.

Barinas was particularly impacted by the drop in national income, the blockade, and the consequent loss of the material base of the Venezuelan State, which translated into a significant loss of public management capacities.

Although all this is also true at the national level, it is a fact that, in the political sphere, the Barinas leadership did not try to properly maneuver the administration under such circumstances, they simply allowed them to penetrate into public policy areas.

All of this ended up getting expressed at the polls, in two consecutive elections in a short interval.

3. Chavismo’s inner fabric in Barinas
Intra-family disputes amongst the leaders of Barinas with family ties to Hugo Chávez did not help the situation either. Especially, the feuds between Adán and Argenis Chávez (Hugo Chávez’ brothers), and then between Argenis and Hugo Chávez Terán, son of Nacho Chávez, were detrimental.

The family dispute which had been discretely going on for years gained more notoriety at the end of Adán Chávez’s last term and with the rise of Argenis in 2017, reaching concerning levels in the last four years. Hugo Chávez Terán’s participation made the contradictions more evident, generating an inner division within the base and in the functioning of PSUV.

In the 2021 PSUV primaries, Argenis Chávez managed to circumvent the party’s regulations and Hugo Chávez Terán took advantage of the situation for his self-promotion, thus unleashing a difficult dispute that forced the party structures to take sides.

Then, in the election of November 21, 2021, many of those who followed Chávez Terán refrained from voting for Argenis. Those who rejected the mayoral candidates imposed by Argenis, abstained from voting and the outcome was evident. In fact, in some municipalities in Barinas, more people voted in the PSUV primaries than chavistas voted in the actual 21N elections.

Argenis Chávez ended up with 630 votes less than Freddy Superlano, and could have won the election with 37% of the votes. Hence, this minimal difference, which had been catastrophic, could have been avoided if the PSUV structures in Barinas had remained united.

The aforementioned leadership divisions and feuds fractured the functioning of the PSUV machinery, such as in the organization of the 1×10 strategy for the November 21 elections, which had repercussions in the January 9 election (9E) as well.

But the structural fractures of the PSUV were not the only sign of deterioration of Chavismo‘s inner fabric in Barinas. There are also other more dangerous characteristics typical of social decomposition.

The dispute between the Chávez brothers led to divisions and attacks between regional factions and of favor-seeking networks of “loyal” supporters surrounding the party leaders.

The feuds disabled the mechanisms of internal control within the party, in local institutions and in society in general, since many of the criticisms, many of the legitimate denunciations of corruption were taken as “betrayal” and “attack” from one side or the other.

These circumstances generated a downward spiral of social decomposition. In other words, corruption and the gains from it, on different scales and levels, began to take shape as an amalgamation of political loyalties.

Then, the party organization which was shaped by Argenis’ impositions at all levels of the party and which replicated the practices of the inner circle around the former governor became weakened by the very decomposition they had fostered. That is to say, the whole party structure was weakened by the very weight of the corruption of the middle and upper leadership.

The entire erosion of the political fabric ended up being a key factor for the outcome of the January 9 election.

4. The Opposition factor
Besides the difficulties at a national level and the negative circumstances of the leadership in Barinas, Chavismo faced other adverse conditions at the local level.

Possible vote buying tactics used in Barinas and the the flow of illegal resources seemed to have struck once more. This is a security threat at a national level.

There was also an influx of corrupt resources coming in from the fake “government,” which seemed to have camped in the Barinas political arena, making this a national laboratory for fraudulent tactics.

In purely mathematical terms, the opposition’s overall numbers did not grow significantly in the January 9 elections compared to those in the November 21 elections. Hence, the post-election November turmoil was not significant in voter preference. Rather, the accumulated rejection and the monetary incentives were detrimental for Chavismo.

Barinas has not had a right-wing government in charge during the Chavista era, hence its voters have now entered uncharted territory. Many of the expectations of the people of Barinas, especially those from the opposition, are not based on concrete solutions or hopes, rather on a rejection of what had been experienced in recent years. Therefore, defining Barinas subjectively as an “opposition” state may be short-lived.

5. What Chavismo achieved
Jorge Arreaza’s campaign managed to fix, at least temporarily, an immense part of the political fabric of Chavismo. Arreaza managed to unite the party in his candidacy, through a campaign of hope which moved people by invoking Barinas’ profound Chavista sentiment.

Interestingly enough, and against negative expectations, Arreaza, who has a solid profile as an official and not as a political leader of the masses, managed to connect with the people by alluding to the semiotic codes of a Chavista origin and identity, and by evoking an exciting and concrete political saga. Arreaza evoked a sense of Chavista pride and proposed meaningful ideas, not only for Barinas, but for the whole country.

Although this could not manage to overcome the adverse statistics, it did highlight that the Chavismo ideals have great validity and potential and have not been overwhelmed by external smear campaigns, by the corrosion that the country’s infrastructure has suffered, or by subjective changes in the nation in recent years.

Regarding the numbers, Chavismo increased its vote by 25% in Barinas in just four weeks.

The PSUV campaign recurred to a significant deployment of its national leadership, which allowed Barinas to be considered as a representative sample, albeit a very idiosyncratic one, of the political situation in the country. If Argenis Chávez or Jorge Arreaza had won the Barinas elections, there would not be such essential regional discussions for understanding the new national realities.

Today, Chavismo in Barinas, but also on a national scale, has regained a minimal but invaluable space to maneuver, seeking in itself the keys for its recomposition. Barinas showcased that social and political structures are dynamic, and that they also demand the permanent 3Rs in everyday life.

Barinas must urgently rethink its political arena to revitalize itself, and to endure.

Although Barinas, with its sentimental and symbolic value, has been taken over by the opposition, this is not a foreshadow of the end of Chavismo at the national level, since there are no solid arguments to sustain such a thesis, given the complexity and diversity of Venezuela’s national social fabric.

“Defeat” is the mother of opportunity.