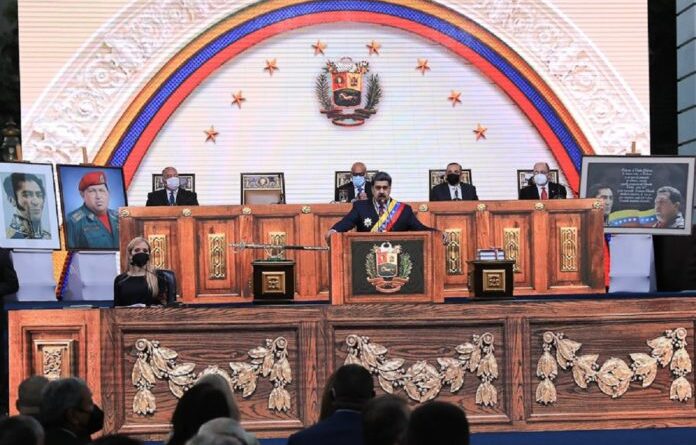 The President of Venezuela, Nicolás Maduro, announced this Saturday, January 15, that 2021 was the year of economic growth, which was a national collective achievement.

During his annual speech to the nation, from the National Assembly, the president highlighted that the real economic growth achieved in 2021 was done so with national effort and work, for which he thanked workers, businesses and the entire country.

President Maduro insisted on focusing on Venezuela’s economic recovery, but without getting distracted from the main goal: to build socialism.

“I thank all the workers, businesspeople, and the country as a whole, because this achievement of economic growth in 2021 is a collective, shared, and national achievement; it is everyone’s achievement,” he said.

The head of state asserted that after five years of financial persecution, blockade and boycott, the real economic forces of Venezuelan society were activated, such as the 17 engines of the economic agenda, which was done with a lot of patience, intelligence and appropriate decision making.

He explained that during the third quarter of 2021 an increase of 7.6% was achieved, and that specialized institutions project a growth of more than 4% of the Venezuelan economy, a fact that he described as a wonderful achievement.

Likewise, he repudiated the sectors of Venezuela’s politics that have opted to harm the national economy, industry and currency; to which he does not understand why they would want to prohibit Venezuela’s economic and commercial freedom.

“It is because Venezuela does not have the right to sell the products it produces, to sell its wealth abroad, to receive profits and to invest them in salaries, roads, education, health, housing, or public services,” he condemned.

Maduro stated that 2021 was also the year of the consolidation of political peace, a period characterized by great achievements.

In this regard, he stated that the objectives were achieved because each and every person in their respective function and responsibility made it possible.

2022: A year to maintain economic growth
Speaking of his aspirations for the new year, the president expressed that he hopes that 2022 will maintain this economic growth, in order to further stimulate the growth of the social economy.

“2022 will have to be marked as the year of the emergence and consolidation of this economic phenomenon; in the emergence of the entrepreneurs of the country,” he pointed out.

In that sense, the president indicated that there are thousands of men and women who have taken their knowledge and work to become entrepreneurs, offering their products, goods and services.

The head of state, addressing the entrepreneurs, said that in 2022 he will go as far as to expand financial credit and support entrepreneurship; for which he made a call to the public banks to support them.

Featured image: Venezuelan President Nicolas Maduro during his annual speech to the nation from the National Assembly headquarters. Photo by Presidential Press.