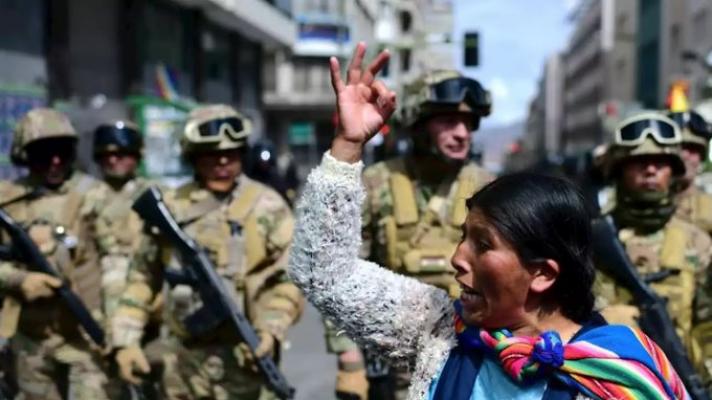 Jeanine Áñez, towards the end of the reign of her coup government, requested military assistance from the United States and United Kingdom embassies “to repress the Bolivian people.” This was declared by the Deputy Minister of Citizen Security of Bolivia, Roberto Ríos, on Tuesday, December 7.

“All the weapons and equipment requested were supposed to be used to repress the Bolivian people,” denounced Ríos. He showed letters sent by the de facto government to Washington and London’s diplomatic missions in Bolivia just months—and even weeks—before the October 2020 presidential and parliamentary elections. A similar situation occurred in days prior to the coup perpetrated against former president Evo Morales and during Áñez’s subsequent accession to power, when the governments of Mauricio Macri of Argentina and of Lenin Moreno of Ecuador provided military assistance to the coup plotters.

RELATED CONTENT: Bolivia Has the Lowest Inflation in Latin America

Bolivia's coup regime wrote these letters to the UK and US embassies to ask for military aid, just 3 weeks before the 2020 elections.

Leaked audios show that the Ministry of Defense was planning a second coup to prevent Luis Arce from taking power: https://t.co/3ZRNkdbTfn pic.twitter.com/end7HaAHpB

The first page of the letter that Áñez sent in May 2020 to then US ambassador, Bruce Williamson, reads: “I request you to comply with our requirement in order to defend the integrity of the Bolivian people and their territory.” A similar official note was sent to the British embassy in September 2020.

Moreover, after the de facto government lost in the October 2020 elections, the coup leaders planned to deploy hundreds of US and Colombian mercenaries to overturn the election results in a frustrated attempt to prevent President Luis Arce from assuming the presidency.

Thus, the coup government had planned to repeat the script that overthrew the reelected president Evo Morales and made him flee the country in 2019. During the anti-coup marches that took place in the post-coup period, the police, under Áñéz’s orders, harshly repressed the protesters with bullets and tear gas. The police and military repression was responsible for several massacres that went unpunished and caused an estimated 36 deaths and over 800 grave injuries.

Featured image: Throughout the year-long coup government of Jeanine Áñez, the Bolivian people were severely repressed by the Bolivian military and police forces. Photo: EFE