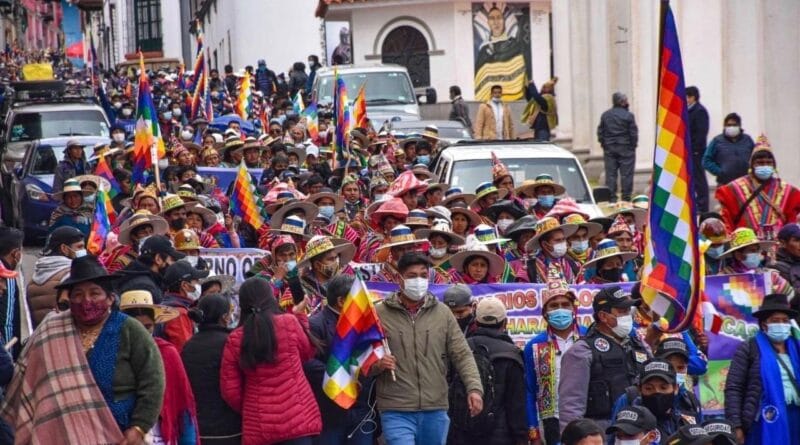 In response to the anti-government strike called for by the far-right sectors in Bolivia, hundreds of citizens took to the streets in different parts of the country to express their support for the socialist national government. Meanwhile, local media reported that the business activities are running normally across the country

A 24-hour strike called for today, October 11, by the far-right sectors in Bolivian against the socialist government of President Luis Arce has been diminished by massive counter-mobilizations by the working class and popular sectors in the country. Since midnight, hundreds of Bolivians have been marching in different parts of the country to express their support for the national government and to reject the destabilization action by the opposition forces.

In the capital La Paz, hundreds of citizens marched through main streets, shouting slogans such as “coup d’état never again.” Meanwhile, in the Santa Cruz department, a strong base of right-wing groups and oligarchy, the residents of the Plan 3000 district took to the streets and declared that they would allow the right-wing protesters to block roads in the department. In Santa Cruz de la Sierra, the capital city of the department, the supporters of the ruling Movement Towards Socialism (MAS) party, demonstrated in the streets against the opposition leader and governor of the department, Luis Fernando Camacho, as well as against the Pro Santa Cruz Civic Committee and its leader Rómulo Calvo, who gave the call for the strike.

“Down with fascist Camacho, down with the Civic Committee!” pic.twitter.com/hTx20P5uiN

Bolivian media outlet, Kawsachun News, reported this morning that the “anti-MAS strike has failed in every city” and that “everyone is working normally,” except for “a few wealthy districts in Santa Cruz.”

Gustavo Arce, the cultural secretary of Bolivia’s trade union center, the Central Obrera Boliviana (COB), confirmed that the businesses are running normally across the country. “Things are normal and, therefore, the aforementioned civic strike does not exist,” said the union leader in an interview with the state channel Bolivia TV.

The call for the strike was given on October 1, the day the Prosecutor’s Office summoned Camacho to testify over his role in the 2019 coup d’etat against former left-wing president Evo Morales. The far-right organization deemed the judicial action as an act of “political persecution.”

Various political and social leaders condemned that with the maneuver, the leaders of the civic committee were seeking impunity for those responsible for the 2019 civic-military coup and the massacres of those who resisted it in the streets.

In addition to the pro-government marches and demonstrations being held today, massive actions have been planned for tomorrow. Indigenous organizations, social movements and trade unions will hold nationwide mobilizations on October 12, celebrated as Decolonization Day in Bolivia.

These mobilizations were called on October 3, in defense of democracy and President Arce’s government, and against the insults to the Indigenous Wiphala flag by Camacho and his supporters in the past weeks. The Wiphala is a national patriotic symbol recognized by the Constitution. It represents the struggle for recognition and equality of the Indigenous people and is a sacred symbol of the Plurinational State of Bolivia.