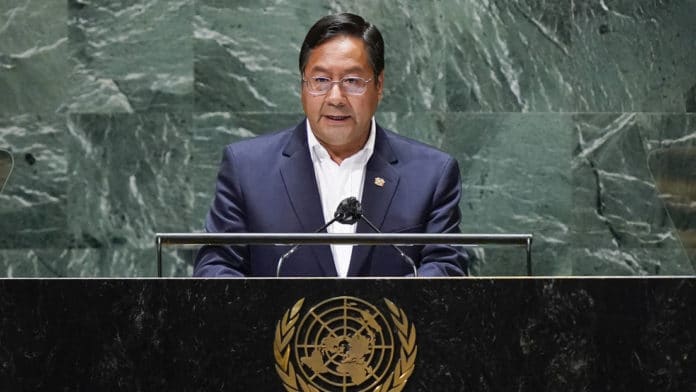 On Thursday, September 23, at the 76th session of the United Nations (UN) General Assembly, the president of Bolivia, Luis Arce, denounced the Organization of American States (OAS) for its divisiveness and for promoting coups d’état to generate destabilization.

During his speech at the UN General Assembly, President Arce highlighted that Bolivia recovered its democracy after the coup d’état perpetrated against the nation in 2019.

Regarding the coup, he recounted the participation of the OAS and other countries in generating destabilization after the elections.

Arce also repudiated the human rights violations committed during the de facto government of Jeanine Áñez. “The persecution, prosecution, and imprisonment of innocent people became a daily and normal fact against a population mobilized for their rights,” he said.

This is not the first time that the president of Bolivia has rejected the OAS. During his visit to Mexico to participate in the Summit of the Community of Latin American and Caribbean States (CELAC), he affirmed that the OAS does not represent Latin America.

“The OAS no longer represents us” he declared. “Other interests enter into decisions of what happens in the OAS.”

Universal access to COVID vaccines
In his first speech at the 76th UN Session, Arce called for equitable, fair, and timely access to vaccines and other supplies to combat the COVID-19 pandemic.

The Bolivian president said that the pandemic has shown that inequality continues between the central countries and those of the periphery.

“To the multidimensional crisis of capitalism, the health crisis has been added,” Arce explained. “At the same time, this crisis has shown that inequality continues between the central countries and those of the periphery, euphemistically called developed countries and developing countries.”

On the other hand, he pointed out that countries should prioritize the “eradication of extreme poverty and the reduction of inequality in all its dimensions,” in order to guarantee access to basic services for people.