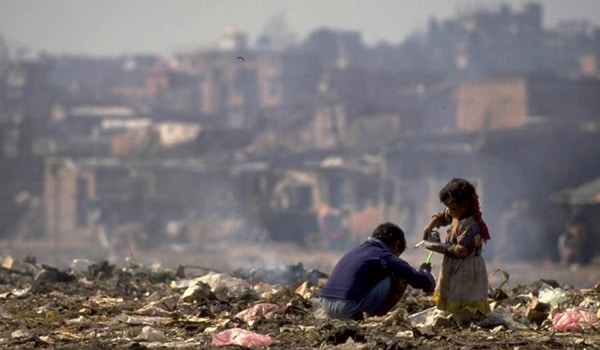 Seven out of ten children in this wide world of the south are victimized, in their bellies, by Argentina’s political capitulation to the managers of false dreams, to the CEOs of hunger, to the bosses of the world. Seven out of ten, which will become eight, in this country of fertile land, with the excuse of a war 14,000 kilometers away—a land where wheat is a symbol of national identity, where the price of bread has increased so that it is no longer affordable by many, because of the wheat that Ukraine no longer exports. Food prices shot up by 7.5% in February in only 28 days. The INDEC does not point out the consequences on the figures. It does not highlight the poverty that reaches millions when food flies away to heaven and moves away from stomachs.

They, the owners of the land that the poor do not even have to drop dead on, cannot bear to give up a fraction of their obscene profitability. There is talk of retentions, and the voices of those who shout the loudest are raised. Faced with the tragedy of millions in surpluses that destabilize the construction of this country for the few. Then the scarce political courage retreats indecorously. And the state declares itself impotent to regulate the exponential profit that shoot up with the same speed as the poverty of the faceless masses, those who are in the majority, at the bottom of the pyramid, but without the power to harm the elected.

In the midst of the hecatomb, the government is split in two in an atrocious internal fight that those nameless ones watch from the outside.

The abdication before the International Monetary Fund is the noose around the neck in the face of the powerful of the world. The mortgage of a future that is no longer there, that is tomorrow, that is the abolition of happiness, that is the lack of calcium in the bones, of an open-minded growth, of white teeth, of a school that can support children, of a hospital that can prevent sickness, of a life that does not end at 14 because of hunger, the consequence of a state that abdicates before the power but disciplines the punished.

It was the state that decided to pay an illegitimate debt, not contracted by the masses, who pay their debts like good folk. It was those who humiliate themselves to keep themselves in government, to the point of making pacts with the local partners of the world’s bosses. Those who used the government to indebt 45 million oblivious people and to siphon off $45 billion. However, now they feel morally authorized to demand to be exempted from public blame. And the petty, milquetoast, pusillanimous government accepts it.

It is a noose around the neck of the owners of life and death in this quadrangle of land where dreams are drowned, where access to bread, eggs, and milk is going down the drain due to the impact of a war 14,000 kilometers away. Today bread, the symbol of food in the history of mankind, that which arrived during the Neolithic period shortly after the invention of fire, is close to 300 pesos per kilo, against 140 in December 2020, or 73 in 2019.

Today, war is the subterfuge when before it was the pandemic and, further back, without any pretext whatsoever, it was the simple need to fulfill the demands of international creditors and large producers.

Obscene figures
The establishment media shamelessly reveal the tragedy in numbers. Argentina appears on the world’s financial charts as the third largest producer of honey, soybean, garlic, and lemons, the fourth largest producer of pears, corn, and beef, the fifth largest producer of apples, the seventh largest producer of wheat and oils, and the eighth largest producer of peanuts. La Nación writes: “Argentina’s largest export products are the oilseed sector (soybean, soybean meal and pellets, oil, beans, and biodiesel); the cereal sector (corn, wheat, among others); the beef and automotive sectors.” Of course, these are not small producers who work the land in loving harmony with the Pacha. Cargill, from the United States, is the main exporter of grains, pulses, flours, and vegetable oils (15.1 million tons). Cofco (China National Cereals, Oil & Foodstuffs), with 14.4 million tons, is the company in second place, and Viterra (ex Glencore Agriculture, of Canadian origin) is in third place with 14.35 million tons.

Singenta’s CEO travels visits spotless television studios and speaks to one and all, calmly outlining this world of technology, transgenesis, and poisons that structures the extractive production model which keeps the land and the people in check.

Seven out of ten children in this wide world of the South see the fierce shards of political capitulation to each one of the mega-companies that set the rhythm to which this portion of the earth must dance. While seven out of ten children hear the emptiness of their stomachs, exports to China increased by almost 37% in 2021; 32.6% to the Middle East; 32.4% to the European Union; 18.1% to USMCA (USA, Mexico and Canada); 7.2% to MERCOSUR, and 3.2% to ASEAN (Southeast Asia).

Meanwhile, last September the Institute for the Promotion of Argentinean Beef announced that beef exports “grew by 25% in volume last August versus last July.” However, in order to calm consciences and mold the criticisms to their own standards, Miguel Schiariti, president of the beef chamber (Ciccra) clarified: “We sell to the world products that are not consumed in the domestic market. To China go old cows and skinny animals, and a small amount of steak, rump, and loin. To the United States and the EU we sell three-year-old steers, weighing 500 kilos, which are not consumed in Argentina either. Here, people prefer smaller animals, of 270 or 300 kilos, 18 to 24 months old.” How much meat, of old cow or skinny animal, of 300, 400 or 500 kilos animal, of loin or stew, went to the plate of those seven out of ten children? How long has it been since those children have seen a piece of meat? From where does the children’s bodies receive proteins? How can life continue, if that meat helped develop the brain so that humans could be thoughtful and lucid humans?

Argentina, they say, produces food for 300 million inhabitants. Who do not necessarily inhabit this land. The best food of this land is exported and fills with foreign currency the pockets of the super-producers, those who cannot be regulated in their obscene profit with one more point of retentions. The food that remains, the discarded, is for the surplus. The seven out of ten children who go hungry or eat poorly.

The empty plate
While a model that focuses on extractivism has been deepening for decades, that was—and still is—capable of razing the forests to not leave a single centimeter of land unexploited. And that allows the use of more than 500 million liters/kilos of agrochemicals per year, capable of subjecting more than 12 million people to a daily poisoning as a result of fumigations.

Today an inflation rate of 4.7% was announced for February, the highest in a single month since 1991, and a 7.5% inflation in the cost of food—a blow to the daily table of those seven out of ten children in these devastated lands in the south of the world.

Meanwhile, Mauricio Macri—responsible for a fatal chapter of this calamity—will play the Bridge World Cup in Italy. And Alberto Fernández—responsible for this cowardly capitulation—announces a war against inflation for the day after tomorrow. A war. When the world is bleeding to death. And the future looks tiny. Very small. Like the poor man’s dinner.