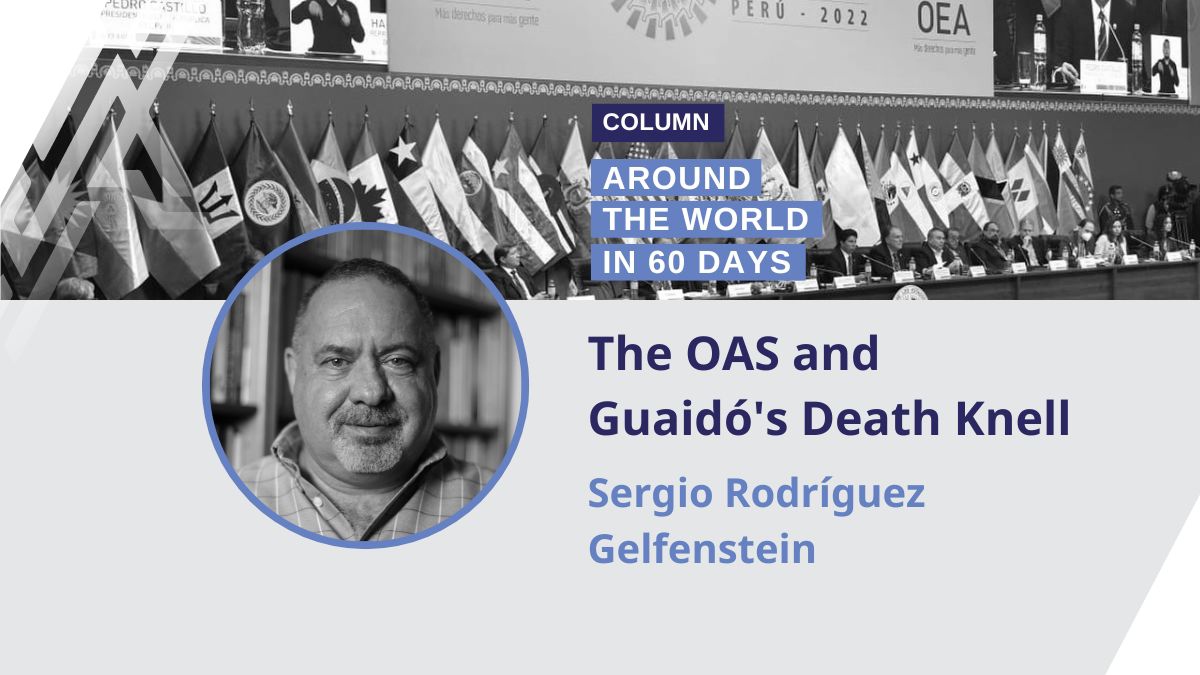 The opposition leader’s “international recognition” charade no longer holds even in Washington-aligned forums.

In today’s world it is impossible to assume that local or even regional realities can develop in isolation, thus making it impossible to understand them if removed from the global situation. World events are interrelated in such a way that events that occur in distant places, far from where we are, have a direct influence on our environment, including on the daily life of each citizen.

Transnational media corporations and the powerful take advantage of this reality to generate “truths” that are quickly transmitted to hundreds of millions of people who, oblivious to the surrounding reality, believe, assume and echo these axioms as if they were paradigms of the sustainability of politics, the state and society.

This is what explains the rise of an obscure figure of dubious respectability such as Juan Guaidó to the category of head of state, without ever having been chosen for such post, not even if it were within the framework of the most fragile democracy that could have existed, which is not the case in Venezuela, a country where since 1958 the institutions of the State and society have functioned, with a National Constitution that supports them.

The year 2019 saw a change to this reality after 61 years of continuity of the democratic system, when Guaidó proclaimed himself president of the republic, sustained only by power and force expressed in the form of threats, blackmail and attempts at intimidation by the United States and the European Union.

Thus began a powerful media operation, working in tandem with strong diplomatic, economic, military and political pressure, to announce the “imminent overthrow of Maduro.” From then on, Guaidó was the axis around which all kinds of actions aimed at taking power by force revolved. These included efforts to fracture the Bolivarian National Armed Forces (FANB); the attempted assassination of President Maduro, and invasions by sea and land with the complicity of the Colombian government of Iván Duque and that of other countries such as Chile, Argentina and Paraguay, to name a few. Likewise, there were alliances with drug trafficking and organized crime in order to unleash destabilization plans and terrorist sabotage against critical infrastructure facilities in the country.

The attacks from abroad also featured a strong targeting of the national currency (the Bolívar) through financial instruments that sought to weaken it and make its use unfeasible; the introduction by force of false humanitarian “aid” as a tool of political pressure that would grant credibility to Guaidó; brutal diplomatic concomitance to isolate Venezuela through the creation of the Lima Group as the driving force of said policy; the breaking of diplomatic relations, the withdrawal of ambassadors and a rejection of the diplomatic representatives of the Venezuelan state in order to accept those appointed by Guaidó; the illegal appropriation of assets belonging to the Venezuelan state, including [state-owned] companies, diplomatic and consular headquarters and other buildings; the theft of currency reserves and precious metals owned by Venezuela, protected in financial institutions outside the national territory; sanctions of all kinds against authorities and institutions in the country, especially those related to the production, distribution and export of oil; the blockade of the country’s maritime territory to prevent ships loaded with food and medicine from reaching national ports; and threats to private and public institutions of any country that relate, trade or exchange with Venezuela; among others.

As seen above, the complete menu, as well as the operational methods used by Washington and Brussels against Venezuela, were very extensive and perverse. But against all odds set in the imperial capitals, the Venezuelan people resisted and were able to create conditions to overcome the worst of the crisis, although today the conditions that created it remain as an expression of a prolonged genocide of the global powers against the Venezuelan people.

What is certainly true is that there was never a day during this long ordeal in which the stability of the government was in question and the continuity of President Maduro’s mandate was at risk, despite all the headlines to the contrary made by the misinformation transnational media companies throughout this period. I remember that approximately two years ago, I typed the phrase “Maduro’s imminent fall” in an internet search engine and it returned some 600,000 hits… since 2014. This was more wishful thinking than reality.

Trying to make sense of this situation, the European Union High Representative for Foreign Affairs and Security Policy Josep Borrell, when he was still Spanish Minister of Foreign Affairs, when asked by a journalist during an TV appearance in his country, as to who he recognized as president of Venezuela, he replied that: “undoubtedly Juan Guaidó.” Next, the journalist asked him what would happen if a problem arose with a Spanish citizen or company in Venezuela, with whom the Spanish State would deal with. Borrell responded undeterred: “With Maduro.” The somewhat surprised communicator snapped at him: “Mr. Foreign Minster, you realize that this is incongruent.” To which the flamboyant representative of His Majesty’s foreign policy explained that was not the case. According to him, they were “innovating in terms international law,” exhibiting with total self-confidence and the highest crudeness the legal aberration of Guaidó’s self-appointment.

OAS General Assembly: 11 Countries Fed up With Guaidó’s Circus Act as They Oppose His Presence in Lima

But times have changed, the world, and in particular Latin America and the Caribbean, are evolving positively towards the construction of a different international system and that has weakened Washington’s hegemony. In the region, the loss of prestige of the Organization of American States (OAS) is evident, while at the same time the Lima Group has disappeared, reducing the weight of the United States’ policies against Venezuela.

This situation seems to have reached an almost terminal stage at the recent 52nd General Assembly of the OAS, held in Peru from October 5 to 7. At this gathering, where Venezuela did not participate due to having withdrawn from the organization in 2019, an event occurred that is surely indicative of the final death throes of Juan Guaidó as a political actor manufactured by the United States.

The OAS, maintaining the fiction of Guaidó as president of Venezuela, invited his representative to the conclave. However, he withdrew his attendance after learning that a resolution rejecting and expelling Guaidó from the organization was being prepared. Although the sponsors of the resolution did not manage to get the motion approved, the interesting thing about the case is that only Canada, Paraguay and Guatemala voted together with the United States -and in support of Guaidó, which undoubtedly expresses that the strategy of the self-declared [president] has failed, even in the bowels of an organization absolutely subordinated to Washington such as the OAS.