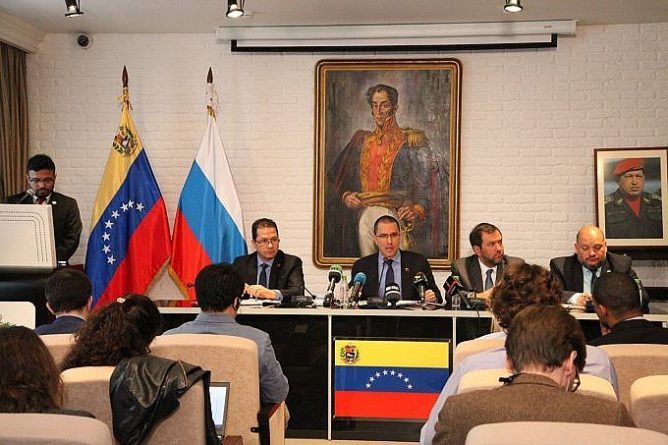 The economic, financial and commercial blockade maintained by the United States Government against Venezuela hinders access to goods and supplies necessary for the well-being of the Venezuelan people, the Chancellor of the Bolivarian Republic of Venezuela, Jorge Arreaza, said on Monday. “There is a unilateral blockade by the United States on Venezuela to suffocate the economy. It is extremely difficult and expensive to buy supplies, medicine and food for the Venezuelan people due to the financial siege,” said the Minister for Foreign Affairs, in a press conference offered to international media at the headquarters of the Venezuelan embassy in Russia. Arreaza stressed that the Bolivarian Government is creating alternate routes with Russia, China and other allies “in order to face this economic blockade. Even the ships that carry the oil to Cuba are being sanctioned. It is a criminal blockade.” He stressed that, as a result of this aggression, the South American country has more than 5,000 million euros, as well as gold, blocked in European banks. “€ 1.359 billion in Venezuelan gold are blocked at the Bank of England; 1,543 million euros in Novo Banco, Portugal”, Arreaza explained, adding that these effects are celebrated by the promoters of the blockade “as an achievement of their policy against Venezuela.”

However, he confirmed that Venezuela will continue with its foreign policy based on the diplomacy of peace “so that the United States can stop its criminal policy and unblock the Venezuelan economy.”

Before the international press, the foreign minister denounced the United States Government for supporting the failed coup against the constitutional government of President Nicolás Maduro, executed on April 30.”It was a plan of the CIA (Central Intelligence Agency of the United States) to overthrow President Nicolás Maduro, to take control of the Venezuelan riches that are owned by the people,” Arreaza said. He explained that the insurrectional action was directed by the deputy to the National Assembly (AN) in contempt Juan Guaidó and the fugitive from justice Leopoldo López, who deceived a small group of soldiers to call an attempted coup from a road artery in the east of Caracas, an action that was supported by the United States Government.

RELATED CONTENT: Chancellors of Russia and Venezuela meet in Moscow

The Minister for Foreign Affairs, Jorge Arreaza, ratified the call for dialogue as a tool to resolve political differences in a peaceful manner. “They have not been able or will be able to by force, through the coup d’etat or imposing themselves with a parallel government,” he said.

“In Venezuela there is a people, an armed force, there are democratic institutions that are not going to allow that to happen. Let’s talk,” Arreaza said.

He added that the Venezuelan right has not agreed to meet with the National Government because the United States has not authorized them to dialogue, so he urged: “Then give the opposition permission to dialogue and talk to you too. Enough of the threat with the use of force.” The foreign minister said in the meeting with the media that Venezuela will continue to strengthen its relations of solidarity and bilateral cooperation with allied countries such as Iran, China, Russia and Turkey. He noted that Venezuela will hold a Binational Commission with Iran “to sign new agreements and commitments in bilateral cooperation in industrial, transport, energy, military,” while with China “we have a comprehensive relationship, an innovative financial architecture that has deepened thanks to the will of Presidents Xi Jinping and Nicolás Maduro.” He also recalled the bilateral meeting he held on Sunday with his Russian counterpart, Sergei Lavrov, in which “we took advantage to review the agreements and scope of cooperation in mining, military, technological, and scientific,” among others. As for Turkey, he commented that “there is an integral bilateral relationship in financial, industrial, commercial, cultural and political matters. We will adapt to prevent the blockade from affecting our cooperation. ”