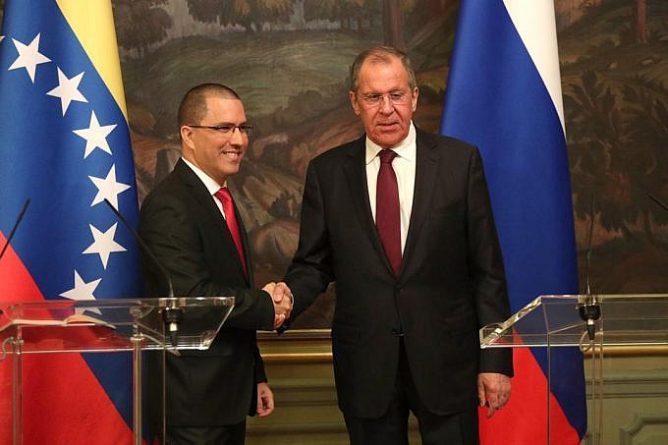 “Russia condemns the US campaign to overthrow the legitimate Government of Venezuela.” This was stated on Sunday by Russian Foreign Minister Sergey Lavrov, before his meeting in Moscow with his Venezuelan counterpart, Jorge Arreaza. During the meeting, Lavrov emphasized that Moscow “urges the Americans and all those who support them to abandon their irresponsible plans and to act exclusively within the framework of international law.”

Listen to the press conference:

Russia urges the USA to abandon their plans to overthrow Maduro by force,” said the head of Russian diplomacy, who said that “only Venezuelans have the right to determine the destiny of their country, for which an inclusive dialogue of all forces is needed. policies”. Meanwhile, attempts to “forcibly change the government in Caracas have nothing to do with the democratic process and only undermine the prospect of a political solution to the crisis,” Lavrov said.

The military option, “a humiliation for all of Latin America”

During the press conference after the meeting, Lavrov has denounced the existence of an “irresponsible campaign” against Venezuela in order to overthrow the legitimate Government of the country, while underlining the solidarity of Russia with the South American country. Also, the Russian minister said he hoped that Washington “understands the use of military force in Venezuela would mean humiliation for all Latin America.”

RELATED CONTENT: Lavrov After Meeting With Pompeo: “I do Not See Even in the US Supporters for a Military Solution in Venezuela” Lavrov recalled that “it is not the first time” that senior officials in Washington do not rule out a military option, but he hopes that their statements “do not reflect the intentions of the president.” In fact, in his recent telephone conversation with Russian President Vladimir Putin, Trump did not express that kind of intention, said the foreign minister, explaining that the conversation revolved around “how to help the Venezuelan people get out of this crisis.” On the other hand, Lavrov warned that “any use of force that circumvents the Charter of the United Nations and the decision of the Security Council threatens disastrous consequences for the entire modern architecture of international security.” As announced by the Russian Foreign Ministry, the two ministers planned to discuss the prospects for a political and diplomatic solution to the discrepancies existing in the Caribbean country “within the framework of the Venezuelan Constitution”, as well as the options for international mediation efforts “to facilitate dialogue between the Government and the opposition”. For his part, Chancellor Arreaza said that the Russian government advocates respect for the Charter of the United Nations (UN) to protect the Bolivarian nation and countries of Latin America and the Caribbean against the US threat. “The very spokesmen of the United States has said that today is Venezuela, but in Latin America they say that the next country is Nicaragua,” he said at the joint press conference. He explained that they intend to establish laws against the sovereignty of Cuba. “It is an onslaught of imperialism under the Monroe Doctrine of 1823. That can not be accepted by the peoples of Latin America and the Caribbean.” In this regard, Chancellor Arreaza highlighted the importance of bilateral cooperation sustained a week ago by both nations. “We are going to improve the military technical cooperation that is important for Venezuela.” He specified that the Bolivarian nation has sophisticated Russian military equipment; also, in financial, cultural, energy, among other areas, “in all sectors we have a comprehensive cooperation agenda with Russia, which we are proud of and we thank President Putin and his government.”

RELATED CONTENT: Russian Senator: Everything Implying US Military Intervention in Venezuela We Will See as an Aggression

Before the meeting of Lavrov and Pompeo

The meeting between Lavrov and Arreaza is held on the eve of the meeting scheduled for Monday in Rovaniemi (Finland) between the Russian chancellor and the US Secretary of State, Mike Pompeo. “It is clear that Venezuela will be the main subject of the talks,” Russian Foreign Minister Sergey Ryabkov said in this regard, adding that it is also very likely that the situation in Syria and “perhaps Ukraine” will be addressed. Lavrov and Pompeo on Wednesday held a telephone conversation in which the Russian representative warned of “the serious consequences” that would result from the continuity of “the aggressive steps” of the North American Government towards Venezuela. Amid the growing tension, aggravated by the attempted coup d’etat led by the opposition “with the clear support of the US,” the Russian foreign minister recalled that interference in the internal affairs of a sovereign state “violates international law”.