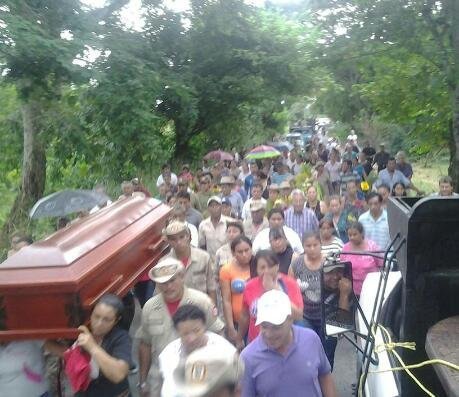 Opinion Security and Defense
August 3, 2019August 3, 2019 orinocotribune Barinas, CRBZ, Hugo Chavez Popular Defense Brigades, Kevin Rangel, paramilitary, Revolutionary Current Bolivar Zamora, Ticoporo Massacre, unconventional war
By Marco Teruggi
On Saturday, July 27, six Chavista militants were killed in Barinas state. The fact is already known as the Ticoporo Massacre and evidences a sustained policy: that of the murder of grassroots Chavistas, hidden by the “great” Western media.
The fact will be remembered as the Ticoporo Massacre . It happened on Saturday, July 27 at about 10:30 am on kilometer 12 of a road in the municipality of José Antonio Sucre, in the state of Barinas, characterized by a flat landscape, where the land seems to lie on its belly under a gigantic sky, there are estuaries, cattle, wide, tall trees, and morning coffee.

The armed group arrived in a milk truck. They knew that they would not attract attention in that area that is transited by dairy vehicles. When they got down, they pretended to be policemen and opened fire. How many shots? What weapons? It remains to be known, the investigation is open.
The six people killed were shot in the head. They were José Geraldo Rojas, Manuel J. Cordero Benítez, Alexi Ontiveros Mora, Eudes Rojas Peña, Kevin Navas, Rodríguez, Milaidis Navas González. They were chavistas , militants of the popular movement Revolutionary Current Bolívar and Zamora, humble people, from a peasant family, from those corners of the country.
“It was a massacre, there is no evidence to show that there was a confrontation, nor was there any reason to have it, they were all killed with a clean shot with joy and planning,” explains Kevin Rangel, national coordinator of the Current. They left homes, families, children, tears and silence on the plain.

RELATED CONTENT: La Via Campesina Stands in Solidarity with the Victims of the Barinas Massacre
All, in addition to being part of the movement, were also part of the Hugo Chávez Popular Defense Brigades, “an instrument that we created for political, productive, and territorial security tasks,” Rangel explains. The Brigades were formed in 2017, when the country, and in particular the Sucre municipality, were subject to an escalation of armed violence by the Venezuelan opposition.

Violence is not new in that territory. It had declined in the last year and a half. It returned like a gust of wind: “there was a lot of preparation, those who acted are mercenary groups, with military preparation. It was a precisely planned operation.”

The municipality of Sucre has in it’s center the highway number 5, which connects Barinas with the border states of Apure and Táchira – but also connects to the capital of the country -. It combines three central elements: the economic, the political and the armed.

In the first case, they are farmers, landowners, loggers, who had recently organized a road block to prevent the passage of food. Politically, it is an area where the opposition, as seen in 2017, embodies the most radical positions (Guarimbas).

As for the violent dimension, there are armed groups, known as paramilitaries, who were the protagonists, for example, of the capture of the people of Socopó that same year, coming to assault weapons in hand, burn and destroy a police station. The three components are articulated.

The main hypothesis in the Ticoporo Massacre points to mercenary groups. “They were killed by a paramilitary group … it is in full investigation, it will not go unpunished, they were killed, it is the violence that is imported from Colombia,” said Diosdado Cabello, vice president of the United Socialist Party of Venezuela (Psuv).

“The investigations are going to tell us how far it has a connection, if it is something local, but nothing is isolated, we always start from that, it could be a compound of many actors considering an offensive towards that municipality that is strategic because it connects the border with the capital of Barinas,” Rangel explains.

The clues are several, and, as always, they have several dimensions: material authors, intellectual ones, financiers. Within a general scenario of the country, there is the new coup attempt that has Juan Guaidó as a national image, operators such as Mike Pompeo and Elliot Abrams in the US, and Iván Duque in Colombia.

RELATED CONTENT: PSUV Repudiates the Murder of 6 Peasants in Ticoporo, Barinas State (+ Video)
“The Americans seek to have more internal territorial control with their allies, that is the strategy of the Colombian paramilitarism towards Venezuela, to position themselves inward, build routes that allow them to locate a strategic rear guard within the territory, food supply corridors and armaments in the face of a possible aggression” adds Rangel.

The murders and paramilitarism

The violence against Chavismo is not new and has manifested itself in different times and situations. One of the best known scenarios is that of the struggle for land: more than 300 farmers have been killed. In 2018, for example, six were killed by gunmen, with the same modus operandi: landowners hired armed groups, paramilitaries or criminal gangs, to kill them on request. Each death had a price.

Another modality has been the violent escalations of the right, as in 2017, when the opposition’s strategy was to chase Chavistas. One of the most emblematic cases was that of Orlando Figuera , lynched and burned in an opposition guarimba (demonstration) for being a Chavista. It happened in broad daylight, in Caracas.
You can also talk about the violence deployed within the territories to hit the base structures of Chavismo . In the case of the Ticoporo Massacre, Rangel states that it is “a message that is intended to be transmitted to the movement, to Chavismo. These are actions that are done in this way to generate terror, demobilize, demoralize the revolutionary forces.”

As for the modalities of paramilitarism imported from Colombia, the case of the Táchira state is significant . There, the protector of that territory, Freddy Bernal , maintains a policy to prevent its progress and consolidation.
The nature of what is being faced is a violence of horror: on July 6, for example, Venezuelan Army officers arrested five individuals carrying three severed heads in a bag, along with pamphlets with threats to commissioners and officials. They were from the paramilitary band ‘El Clan del Golfo’ , which operates from Colombia.

Chavismo faces a permanent assault with two-stroke alternation: that of attrition, with emphasis on the economic dimension, and that of the attempt of termination, where the different variables overlap. This 2019 is an attempt at termination, that is: the overthrow of President Nicolás Maduro .

Chavista murders occur in both strokes. A detailed list of murdered leaders of the PSUV and its base structures, of communal councils, communes, peasants, local supply and production committees, Bolivarian militia, gives an account of a sustained policy with the aim of hitting where one of the genesis and strengths of Chavismo resides: the territories and their popular organizations.

These murders articulate the paramilitary strategy developed in Colombia, the logics of the hybrid war designed in the US that are in an advanced stage, conflicts over land, corridors, and what anti-Chavismo poses as a country model: one where Chavismo no longer takes place. But Chavismo is much more than a government.
The Ticoporo Massacre is under investigation. It will remain as an episode of the low intensity war against grassroots Chavismo, invisible by the great Western media, by the international narrative architecture that conceals opposition violence, its underground paramilitaries.
At this time, those who were killed are commemorated in the vastness of the plain. The bodies are buried, the candles are still lit, the prayers will continue, as will the companions of each of the martyrs – as you already remember them. It is the great will of invisible Chavismo which has never lowered or or will lower its arms.