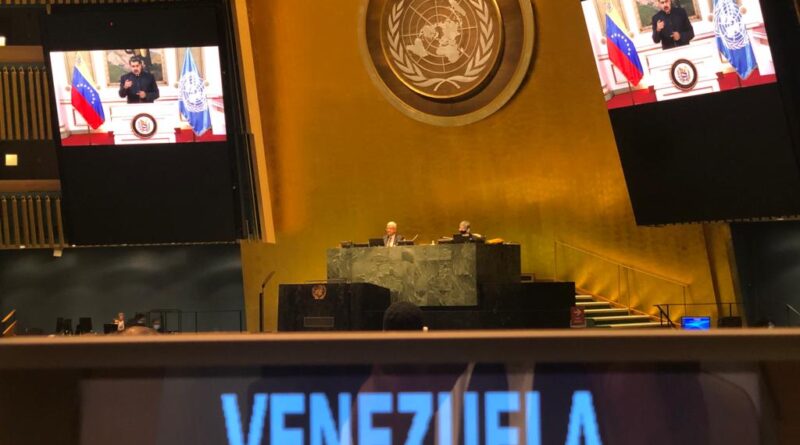 This Wednesday the President of Venezuela, Nicolás Maduro, denounced the aggression suffered by Venezuelans from Colombia and the US. The complaint was made before the 75th General Assembly of the United Nations, where he recalled that the country still resists criminal US aggression, amid the current coronavirus pandemic, focused on an economic blockade. “Venezuela has prepared to overcome the criminal blockade of the United States, he said that “with the force of our history, our spirit, reason and international law” the people will fight North American hegemonic anxieties.”

He stressed that Venezuelans “in the past have taken responsibility for their historical role in the face of the ignominy of the most dangerous empire in history,” which endorsed the freezing of more than 30 billion dollars in bank accounts in the US and Europe, as well as the persecution of companies or governments that trade with Venezuela.

“It is a battle for peace, for our country, for the region and for humanity,” he said.

In this sense, the head of state pointed out that the unilateral coercive measures not only constitute a violation of the UN Charter, but “are obvious obstacles that are imposed on the affected countries [that prevent them from] adequately confronting the pandemic and frim fulfilling the goals of social development.”

“The empire is writing the most horrifying chapters of inhumanity and criminal imposition,” he stressed, while reiterating that “Venezuela is resisting this offensive of criminal and inhuman aggression” by the US governing elites.

He denounced the more than 30 billion dollars that have been taken from Venezuela, frozen and seized in accounts in the United States and Europe, just as they persecute companies and the government that commercialize any good or service with Venezuela, be it food, medicine, fuel, additives necessary to produce gasoline, among others.

In this sense, the head of state urged the people to demand an end to illegal sanctions against sovereign nations, in turn he called on the governments of the world to demand the end of the multiform aggression (diplomatic, political, economic, media and military) of the White House. “It is necessary for the countries that defend peace to be activate and make the United States government understand that, in the midst of a pandemic, no one understands or explains that there is a resurgence of criminal persecution against noble countries such as Cuba, Nicaragua, Syria , Venezuela and other sister countries.” 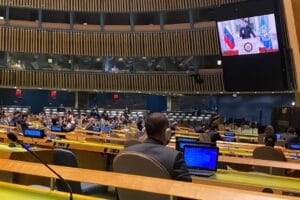 The dignitary reiterated the need to vindicate the principles of respect for self-determination enshrined in the Charter of the United Nations (UN), given that its violation “is endangering the stability of the South American country and the Latin-Caribbean region.”

“Let our peoples exercise their own right to development and peace,” he demanded, urging Washington to “abandon the old practice of criminalizing those of us who do not subordinate ourselves to their designs and stand for independence and sovereignty.”

He stressed that the US “has become the most significant threat to global peace,” an example of which is the support of the Donald Trump administration for terrorist and espionage maneuvers in Venezuela.

“It is a daily siege that we have been facing, denouncing, unmasking one by one,” he said, while stressing that the civic-military-police union was key to defeating the destabilizing operations that also have the backing of the Colombian government.

The national president recalled that on May 3, 2020, he faced an assassination attempt and a maritime incursion by a group of mercenaries and terrorists, financed by the United States f

government and trained in Colombian territory with the absolute support of both governments, which were captured in real time by the civic-military-police union and are currently under the orders of the justice system in full respect of due process.

He also announced that Venezuela recently captured a US spy with weapons of war and documents relating to the oil and electricity industry. “It is a daily siege that we have been facing, dismantling, denouncing and unmasking,” he stressed.

He insisted on the need to vindicate the principles of respect for sovereignty, for the self-determination of peoples, expressed in the Charter of the United Nations that unites us all as peoples. Their illegal violation by some UN member states is endangering the stability of Venezuela and the Latin Caribbean region.

Venezuela promotes the path of dialogue
He stressed that Venezuela as a member of the United Nations Human Rights Council, despite the incessant attacks by the United States and its satellites, reaffirms its commitment to promote respect for human rights and fundamental freedoms of all people, without distinction of any kind and in a fair and equitable manner, firmly supporting any fight against discrimination based on gender, ethnicity, nationality and other forms of intolerance.

“We are committed to the ideas of universality, impartiality, objectivity, with international and intercultural dialogue, constructive and cooperative to promote and protect all human rights, including the right to integral development of the peoples,” he said.

He stressed that the Movement of Non-Aligned Countries (NAM) has promoted the recognition of these initiatives of policies and values with the celebration of the World Day of Multilateralism and Peace, has joined the group of friends of the Alliance of Civilizations of United Nations, of those who fly the flags of pluralism and equity. 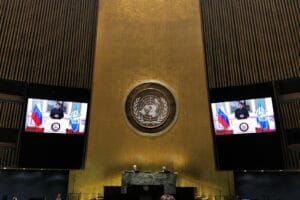 He insisted that the coercive and unilateral measures imposed by the United States have tried to subdue the Venezuelans, however the Venezuelan people together with the Constitutional government have heroically resisted the illegality and inhumanity of an empire that today represents the most serious threat facing the multipolar world.

“Today standing up and with the dignity of a people that inherited the glories of the Liberator Simón Bolívar, we tell the supremacist government of the United States that the world is looking at them and that the 21st century has millions of eyes that see beyond the media narratives, where they still have time to return to international legality, to reverse the discredit and global malaise that their arbitrariness and arrogance provokes in the conscious world,” he added.

Xenophobia against Venezuelans
Venezuela faces and is experiencing a wave of massive voluntary returns of thousands of Venezuelan migrants from countries with very high levels of COVID-19 infections such as Colombia, Ecuador, Peru, Chile and Brazil.

He added that the return of Venezuelans has been for various reasons and one of them has been the failure to deal with Covid-19 in those countries, the systematic violation of human rights, anachronistic and xenophobic policies, even from high ranking officers in these governments, discrimination, mistreatment, lack of socio-economic conditions, semi-slavery situation, human trafficking, calamities that Venezuelan migrants have suffered in clear violation of their human dignity.

Given this, he stressed that the fragility of the social protection systems of these countries has been evident, while affirming that despite the enormous amounts of dollars that have been granted to these governments for Venezuelan migrants, therefore that the head of state urged a rigorous institutional and scientific review of the role that some United Nations agencies such as UNHCR and the International Organization for Emigration (IOM) have been playing and how their funds have been used.

RELATED CONTENT: UK Appeals Court Decides the Fate of 31 tons of Venezuelan Gold Seized by the Bank of England and the Fate of UK as a Safe Asset Destination

Guaido’s parody of a UN speech

While President Nicolas Maduro was addressing UN General Assembly, someone in Juan Guaido’s team (or maybe the master in Washington) took the decision to organize a webinar and publicized it as if Juan Guaido was going to address the United Nations. “Usually people accustomed to lie get so use to it that the limit of the ridiculous disappears,” a political analyst said to Orinoco Tribune.

Even one of the most active anti-Chavistas in New York and Guaido supporter could not handle it: “What need have you to invent that you are going to address the UN General Assembly. Tell the truth that it will be a zoom webinar for all who want to hear it wherever they are, which is positive and true,” wrote Diego Arria, former Caracas governor that fled Venezuela after several corruption scandals and later become Venezuelan ambassador to the United Nations, before Hugo Chavez.