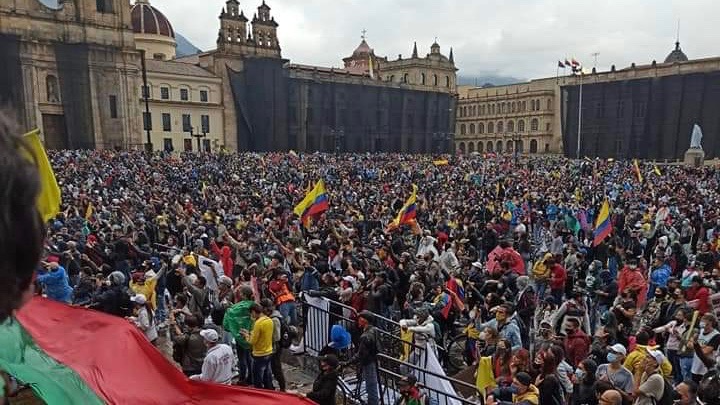 The National Strike that broke out last April 28 in Colombia – with its epicenter in the cities and led by youth collectives- produced in less than a month a political turn in favor of the democratic-popular forces; by contrast, it already provoked hard political and diplomatic setbacks to the dominant narco-business dictatorship in our country.

The unprecedented social hurricane filled the streets and neighborhoods with indignation and popular resistance against state abandonment and arbitrariness, overthrowing in record time part of the “neo-liberal” structure set up by the oligarchy through systematic deception and terror. Among the victories achieved so far by this popular tide are: the withdrawal of the tax package, the sinking of the privatizing health project, the extension of the zero tuition to students of stratum 3, the unanimous international condemnation against the insane wave of police-paramilitary repression of the regime, the forced resignation of the ministers of finance and foreign affairs -representatives of the imperialist bourgeoisie- and a parliamentary trial of the minister of war. These achievements have unfortunately come at a high cost of sacrifice: 52 young people assassinated, 77 mutilated, 520 kidnapped-disappeared, 1,600 arrested, thousands more injured and 24 rapes at the hands of the repressive forces.

Popular pressure also forced the spurious government to convene a “negotiating” table, which the puppet president is trying to manipulate in order to delay substantive agreements and split the mass movement. Furthermore, ignoring the call of the UN, the ILO and other organizations to cease repression, the fascist regime intensified militarization, police vandalism and judicialization against street and digital demonstrators; it groundlessly denied the entry into the country of IACHR observers, invented internal instigators and external conspirators, resorted to crude set-ups trying to pass off the victimizers as victims and sent emissaries abroad to disguise its macabre actions and gather more support for its genocidal crusade against the people. The business unions – the owners of power – treat social protest as a war, instigate sabre rattling and force employees to counter-march, seeking a bloody confrontation between civilians; at the same time, they step up union persecution and massive layoffs as can be seen in the cases of El Cerrejón, Huawei and other companies.

The greatest strength of the social uprising is that it has become a unique school of organization and class struggle, in which day by day assembly spaces emerge that design programs, synchronize “agendas”, organize bastions of resistance, carry out the blockades to make their claims heard and asserted, they meet as intergenerational “meetings” and integrate committees of young people and mothers of the first line. All of this is tinged with artistic expressions, serious debates and political awareness.

The recent peasant marches that are trying to reach the capital cities give greater strength and projection to the mass movement; and, at the same time, they highlight the relative backwardness of the bulk of the trade union movement which -with the exception of the teachers’ strike, the blockade of the coal railroad in Guajira and the Permanent Assembly at the Barranca refinery- timidly joins the demonstrators, if not tied to the business corporativism, but still does not make use of its main weapon of struggle: the production strike, indispensable to accelerate the defeat of the genocidal policies of the government and the fall of the fascist tyranny.

To promote united and conclusive actions of the working class it is imperative to overcome the demobilizing “social dialogue” and prepare the class forces for the coming battles against the labor and pension reforms, inserted in the government’s “package deal”. In this direction. the National Secretariat of the WFTU Colombia urges the trade union and pension organizations to discuss, design and present a project of a democratic and redistributive Labor Statute, that gathers the vital demands of the active, unemployed and retired workers, among them: no levies on labor and pension income; restitution of the 14th month allowance for pensioners; repeal of Law 100 of 1993; elimination of fraudulent labor subcontracting systems (including the so-called union contract); prohibition of artificial “voluntary retirements”; legal recognition of the labor contract for SENA apprentices and university interns, basic income for those who require it and other demands that dignify the life and work of workers and their families.

No less important is the international scope of the heroic deed of the Colombian people, whose outcome will impact at least the struggle of the peoples and countries of our America; therefore the advanced forces of the planet, including our World Federation of Trade Unions and its affiliated unions are providing the popular uprising with a special solidarity.

It only remains for us to note that in order to promote a “common agenda” aimed at establishing the economic and social justice that we are demanding through legitimate protest, we must remember a truth of a fist: in the Colombian streets today the people speak, the people rule. In these circumstances it is a grave error to accept negotiations behind closed doors and try to supplant the representation of the people in rebellion, which by effort and sacrifice belongs to the people themselves in their diverse expressions of struggle and levels of organization.

At the side of the youth in struggle: Let’s go for everything!