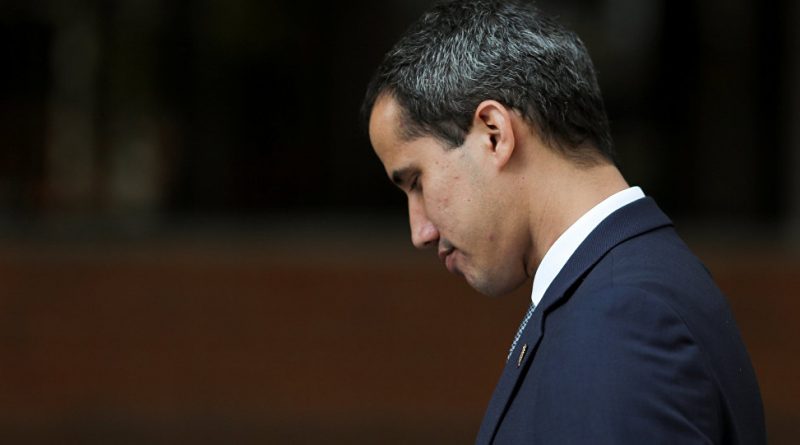 In an unusual fashion by BBC standards, Boris Miranda signed a piece about the current terrible status of the self-proclaimed, Juan Guaido. Main stream media always find ways to inoculate with their venom, that is why we decided to choose the passages without venom but you always are going to have the link to the original piece at the bottom of this page.

Juan Guaidó, who has led the opposition since January 23 and became the great hope of Chavismo’s detractors during this year, is not at his best political moment.

With a very diminished power to draw, parties of his coalition negotiating with the government by themselves and strong criticism for his photographs with individuals indicated to be paramilitaries from Colombia, the “president in charge” is passing through turbulent weeks and not a few questions.

And neither extreme end occurs. The last attempt at dialogue of Guaidó’s emissaries with the ruling party ( in Barbados and with the mediation of Norway ) failed two weeks ago and the massive demonstrations he directed between February and May are not seen since several months ago.

From January to May

The former secretary general of the opposition coalition Mesa de Unidad Democrática (2014-2016), Jesús “Chúo” Torrealba, explained to BBC Mundo that up to this point the effervescence was visible in the streets, something that is not so noticeable at the moment. “Those mass protests are no longer visible.”

The three factions of the opposition

With the “Final Phase” (referring to the endless calls made by Guaido) already turned into a memory, the subsequent street actions convened by the “president in charge” had less attendance and over the weeks they were diluted, although local demonstrations for specific demands are still part of Venezuelan daily life.

In the following months, the government and the opposition initiated a dialogue on the island of Barbados that in August was abandoned by Maduro and on September 15 by Juan Guaidó.

A day later, the ruling party and four opposition parties announced that they reached an agreement that included, among other decisions, the reinstatement of the Chavista deputies to the National Assembly and the restructuring of the National Electoral Council.

Interviewees who looked closely at what happened, argue that it is in this period that (silently) the differences between the three wings of the Venezuelan opposition, the moderate, the center and the radical, deepened more rapidly.

This is explained by opposition deputy Timoteo Zambrano, a member of the Cambiemos party, one of the political fronts that decided to sign the agreement presented on September 16 with Bolivarian government authorities.

The interviewee questions that the dome that accompanies Juan Guaidó will choose to maintain a political hard line instead of concentrating on the daily problems of the population and starting to achieve tangible results.

“At the time there was a lot offered and nothing was materialized. Nothing was achieved with which people could solve their problems. In the end one sees that there are no concrete achievements,” Zambrano tells BBC Mundo.

The deputy thus interprets the gradual decline in the convening power of the head of the opposition and how parties like his began to consider new alternatives.

“You have to deal with the social emergency and if you don’t do it, you disconnect with people,” he says.

Zambrano believes that Guaidó “is not in a good moment” and adds that he believes that “his strategy must be reconsidered and perhaps join this scheme that we are working on (the agreements with Maduro).”

“We are not looking for leaders or messianic leaders. I told Juan Guaidó that if he came to that presidency (of the National Assembly) under the same scheme as those who had been, he would not transcend what he had to do” , concludes the leader of Change.

In this regard, Chúo Torrealba argues that many of the decisions and plans developed since the “president in charge” took an oath were not agreed upon and from there the cracks were generated.

“It became clear that such a consensus did not really exist. There was a sector that took the political initiative and the others folded to that idea. That way the swearing in takes place, the events of February 23 in Cúcuta, the facts of 30 April in Caracas and the dialogue in Barbados. In none of these cases was there broad consultation with the Venezuelan opposition polychromy.”

Torrealba places Guaidó in the faction of the center, that is, the one that is trapped between the one that asks to negotiate to obtain gradual claims and the one that insists on maintaining its radicality until Nicolás Maduro is overthrown.

Time as an enemy

From the headquarters of the opposition, the National Assembly, downplays the splits “that have no representation” and rather point to time as the main problem that Juan Guaidó has.

This is stated by Manuela Bolívar, deputy of the same party as the head of the opposition (Popular Will), who explained to BBC Mundo that the passing of the months increases the social crisis and also generates greater pressure on her movement to find a solution.

Beyond the street demonstrations, divisions and frustrated dialogues, two sound incidents called into question the discourse of transparency and the fight against corruption professed with insistence by the “president in charge.”

First, in June of this year, a case of alleged embezzlement of resources splashed two of his emissaries in Colombia.

The allegations had to do with an alleged diversion of funds destined to support Venezuelan migration on Colombian soil and caused the two involved to be relieved of their functions immediately at that time.

The decision was made by Guaido himself and was accompanied by a legal action brought in Bogotá by his “ambassador” requesting that the Colombian Prosecutor investigate the case.

The scandal was quickly taken advantage of by the ruling party, which accused the opponents of creating a network of corruption and of handling a double discourse regarding transparency and honesty.

At that time, the BBC Mundo correspondent in Venezuela, Guillermo Olmo, described what happened as a blow “where it hurts” to Juan Guaidó, as one of his main flags was his promise to end the corruption.

That complaint came to raise questions even from the allies of the opposition leader such as the OAS Secretary General, Luis Almagro, who demanded accountability.

More recently, the new headache of the “president in charge” was caused by the appearance of some photos in which he appears with individuals who are indicated to be part of the Colombian paramilitary group Los Rastrojos.

The images, as reported, were taken on February 22, when Guaidó entered Cúcuta (northwest of Colombia) by an irregular path to head the caravan of trucks with international aid that finally did not reach Venezuela.

From Colombia, political analysts Sandra Borda and Fernando Posada pointed out that those photographs provoked at least questions around the figure of the Venezuelan politician.

“It is quite possible that Guaidó did not know who he was photographing with, but it is also that knowing that the border is plagued by irregular groups, not having some suspicion faced with civilians with a revolver at the belt is naive behavior and even politically irresponsible,” the political scientist wrote in her column in the Colombian newspaper El Tiempo.