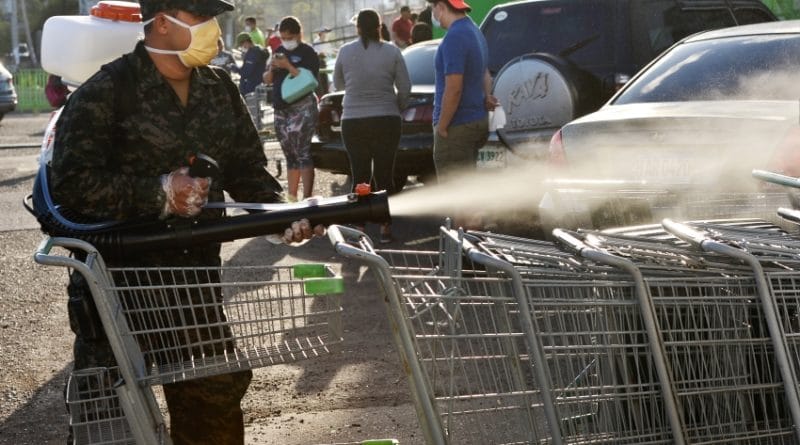 On the roots of the Honduran hunger crisis.

The spread of Covid-19 is terrifying in Honduras, where the healthcare system has been decimated by corruption and defunding. But when I talked to contacts in Honduras, the first concern on their mind was hunger. Honduran human rights lawyer Prisila Alvarado Euceda tells me “at this point,” people in Honduras are “suffering a famine.” Alvarado says that during the three months that Honduras has restricted movement at gunpoint based on identity card number—including trips to grocery stores, pharmacies and work—many people “have not received any food from the state.” Melisa Martinez is an organizer with the Black Fraternal Organization of Honduras (OFRANEH), in another part of the country: Punta Gorda, Roatán, Melisa Martinez. She tells me, “The hunger, in my view, is fatal.”

Honduras has been under strict lockdown since March. This has meant almost total restriction of poor people’s ability to go out and seek work, while the wealthy and people connected to the current government seem able to flout the order at will. As in the United States, shelter-in-place orders have not been accompanied by robust social programs to ensure that people are able to eat and pay rent while staying at home. In a country where 48.3% of people live in poverty, including 16.5% who live in what is considered “extreme poverty,” and more than 70% rely on work in the informal sector, the effects of the lockdown for ordinary Hondurans have been devastating. “If we don’t die of Covid, we will die of hunger,” Albertina López Melgar, one of the general coordinators of the Broad Movement for Dignity and Justice (MADJ) tells me.

Yet hunger is no more a product of natural forces than the palm plantations that have replaced the bananas along the northern coast. From early 20th century military intervention on behalf of banana companies to recent support for a right-wing coup, the U.S. neocolonial relationship with Honduras has a direct hand in driving hunger and poverty. Despite the context of risk, organizers are stepping in to fill the gaps, modeling powerful forms of food security and sovereignty in the midst of tremendous hardship. López points to the fact that President Juan Orlando Hernández had millions of Honduran lempiras allocated for aid to citizens during the lockdown at his disposal, yet the people have received neither food nor medicine. She put it this way: “The people have received nothing, and when they go out to protest for food what they receive is repression.” In a separate interview, Alvarado, a lawyer and member of a group of women defenders of environmental and human rights in El Progreso, Yoro, highlighted that the United States has consistently been implicated in bankrolling and manufacturing the weapons used to repress Hondurans who take to the streets demanding their rights, including in recent demonstrations for food.

Arguing that the basic structure of the Honduran economy remains the same since the days of the powerful banana companies, Corie Welch, coordinator of the Solidarity Collective Honduras Program, says, “This creation and perpetuation of poverty in Honduras has led to massive amounts of hunger in Honduras and this is intentional—it’s not something that happened by chance.”

Forty-nine years ago, Uruguayan novelist Eduardo Galeano wrote, “The Koran mentions the banana among the trees of paradise, but the ‘bananization’ of Guatemala, Honduras, Costa Rica, Panama, Colombia and Ecuador suggests that it is a tree of hell.” In the early 20th century, United Fruit (now Chiquita) received military assistance from the United States to steal public land and install a more U.S.-friendly government in Honduras. O. Henry, author of “The Gift of the Magi,” coined a term for supposedly unstable countries governed by proxy by the United States: the “banana republic.”

Pointing to one continuation of this legacy, Welch says, “You see that with the 2009 coup, the National Party has expanded concessions on mining and mega projects.” Welch is referring to the 2009 coup in Honduras, during which the currently ruling National Party took power in moves condemned internationally yet supported by the United States. This coup was followed by two other ‘soft coups,’ including an electoral fraud in 2017, through which the National Party has maintained power. Throughout this period, current president Juan Orlando Hernández has figured prominently, including in several drug trafficking and corruption scandals. One of the first acts of the coup government in 2009 was to approve a flood of land concessions. Welch notes that after the coup, “you see a big economic change, and that’s in favor of U.S. corporations. And the same happens in 2017 with the electoral fraud.”

Welch underscores that there is a “long historical legacy of prioritizing economic wealth over human rights in Honduras,” and adds that Hondurans who “push for food sovereignty or just their own autonomy, whether it be in how they make their own food or how they survive day to day with alternative economies, are being repressed by the government itself which is using money from the United States to do that.”

Welch is echoed by Alvarado, who holds the United States responsible for “maintain[ing] these types of governments like the narco-dictatorship of Juan Orlando Hernández, who in addition to being despotic, is a murderous government … and the United States knows this. … And we also know that the United States sends a good amount of money to maintain the repressive bodies in Honduras, like the Honduran army, this army that goes out to the streets to kill the Honduran people.” Apparently, sovereignty is still bad for business.

The fight for sovereignty

“I’ll be back and we will be millions” were the last words of the anti-colonial hero Túpac Amaru II at his execution by the Spanish in 1781. In Honduras, these words often accompany the image of Indigenous leader Berta Cáceres, who has become a national hero since her murder in 2016 for defending a sacred river from the imposition of a hydroelectric dam. Aurelia Arzu, another OFRANEH community leader in Santa Rosa de Aguán, Colón, reflects on the dangerous circumstances for activists, especially the Afro-Indigenous Garífuna people in post-coup Honduras, who struggle for sovereignty and autonomy. Recalling the many Garífuna community members assassinated last year, Arzu told me that she did not want to be “just one more statistic in this country… killed for defending what’s rightfully ours.” Despite hostile circumstances and significant personal danger, each of the women I spoke with are engaged in healing and life-saving community work to rectify the failure of what they all refer to as the failed narco-state.

Albertina López tells me that MADJ is working on a food sovereignty project. “This is a project we already had going as an organization, a proposal to create sovereignty for ourselves with dignity,” she says. Across MADJ’s three anti-extraction encampments in Pajuiles, Jilamito and San Francisco de Locomapa, members have planted corn, beans, yuca and plantains, with the intention to swap once the crops are harvested. One crop of yuca has already been shared.

In El Progreso, Prisila Alvarado and her compañeras have formed two community kitchens for kids. Located in sectors of the city that are “totally marginalized by the municipal authorities,” they feed the children “so that the parents can at least have a little bit of calm, and the kids can at least have one or two meals a day.” Alvarado and her group of women defenders work with other organizations and friends to raise the resources and buy the basics, feeding 90 children a day in one of the kitchens.

The many Afro-Indigenous Garífuna communities organized with OFRANEH have built on their existing base to insulate each other from the hunger. Arzu says they too are growing their own food, and that community members young and old are “reconnecting to everything our ancestors did.” Tania Iden, in Corozal, Atlántida, tells me that they are doing home visits (especially to older people), making and distributing masks, making hand sanitizer, making an immunity-boosting tea, handing out food rations, and running clinics for vulnerable community members. These responses are echoed by women from many OFRANEH communities, who sound remarkably empowered during such a dire time.

Featured image: A soldier of the Honduran presidential guard disinfects shopping carts outside a supermarket during a break of the curfew imposed by the government against the spread of the new coronavirus, in Tegucigalpa, on March 19, 2020. (Photo by ORLANDO SIERRA/AFP via Getty Images)